For the project space I decided to take down my large portrait and use a new space to attempt to finish it. I found it very helpful to have a fresh space to work in where there were no distractions and I had space in which to step back and view my work at regular intervals.

I had some other plans for working in the project space, such as some sculptural work with a window/door. However, unfortunately my metal work coincided with my project space, which used up a significant amount of my time. This meant that I could not do as much as I wanted in the space, and so will potentially ask other students if I may be allowed to use a small area during their use of the space. I could also create these pieces in the studio and then take them down to I05 and try them out in the space to see what they look like. 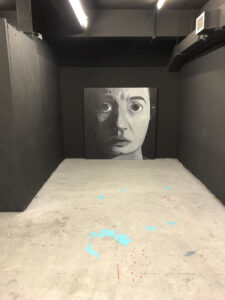 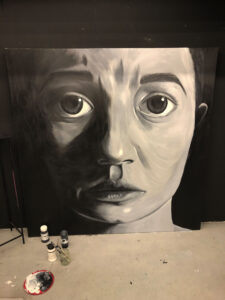 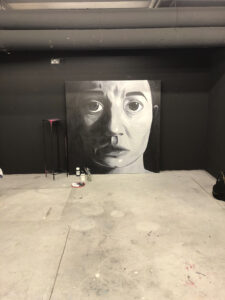 From working on this painting for the time that I had in IO5, it has enabled me to realise that this painting is not working out as I had hoped. I feel that it is basic, bland and does not relate to my work in the way that I wanted it to. I had originally intended for the subject to have mushrooms growing rather grotesquely from the mouth, which illustrated the way that I feel it is to be a woman in todays society. The slow suffocation that we face on a daily bases, our thoughts and feelings amounting to nothing as they are snubbed out and not listened to. I felt that this might be too literal, or even comical in a way and so decided against it. Yet now I feel that I have ended up with a straight, even boring, portrait and I feel does not offer anything in the way of my thought process.

After consideration, I may try building on it in the future, perhaps with some three-dimensional elements. I would like to experiment with creating a moulding effect on the painting, or creating some mushrooms to “grow” out of certain parts. I would still like to create the effect that the subject is being engulfed and decaying; representing my take on what it feels to be female in our current time.