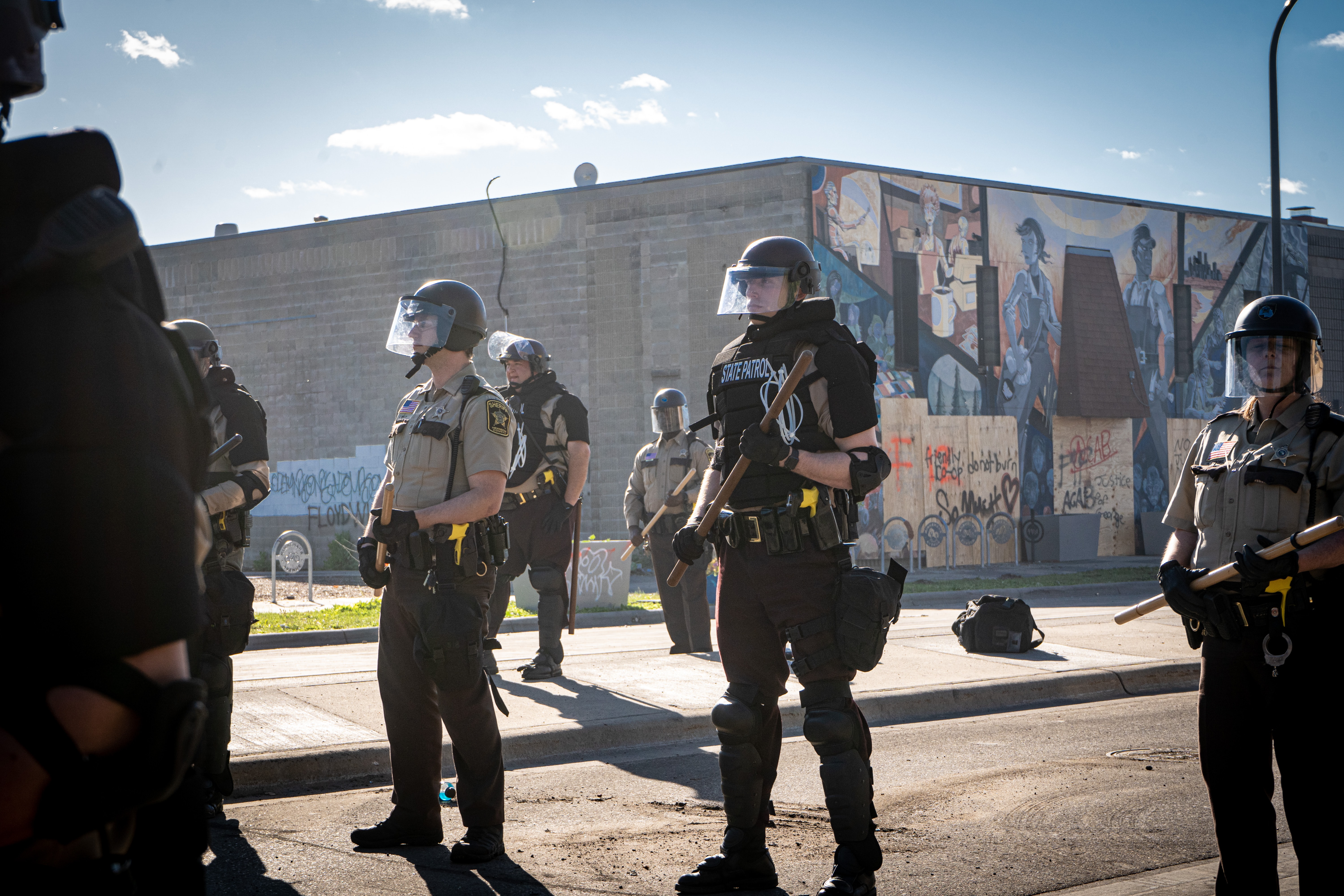 By Hugo Gorringe and Michael Rosie

After a weekend of country-wide protests and riots, President Trump upbraided State Governors for being ‘weak’ and called for them to ‘dominate’ protesters. Failure to do so, he warned, would mean that ‘you’re wasting your time, they are gonna run over you, you’re going to look like a bunch of jerks’. As we have argued elsewhere, this echoes once popular understandings of crowd control long since  discredited. Trump, in fact, referred to protestors as ‘thugs’ , warning that ‘when the looting starts, the shooting starts’:  the phrase of 1960s, racist Miami police chief Walter Headley.

Headley was not alone. Until the late 1960s the basic tenets of what Schweingruber calls ‘mob sociology’ held sway amongst police commanders. Its core is that crowds are herd-like, suggestible and spontaneous: all crowds, therefore, can become law-breaking mobs -though police responses to them are filtered through implicit or explicit biases that mark certain categories of people as more likely to pose a threat. Sociologists like Smelser saw uncompromising policing as key to restoring or maintaining order, advising police to stay ‘ahead of the riot curve’. Contrary to the myth of the madding crowd, however, socio-historical accounts of riots suggest that perpetrators are not misfits, but are integrated into local settings and have specific concerns and grievances. Whilst rioting may appear as irrational, Marx argues that riotous actions have meaning for the actors, and only by trying to understand those meanings can we begin to address them. Casting crowds as ‘criminal’ or ‘irrational’ as Reicher et al. note, ‘suggests ways of dealing with crowds that will fail to resolve conflict and can often increase the level of violence’.

In the wake of widespread urban unrest in 1960s USA, Skolnick argued that they had to be understood as ‘political acts’. He warned that failure to appreciate their political significance would result in overly forceful control techniques that could funnel ‘expressive protest into more organized forms of political violence’. The Kerner Commission, blamed pent-up frustration within, and poor policing of, America’s black communities, arguing that rioters were seeking ‘fuller participation in the social order’. Kerner – like the UK’s later Scarman Report  – called for greater community liaison. Acknowledging these insights and stepping back from the ‘madness of the mob’ allows us to place disorder in context and think through alternative modes of police intervention.

Riots are not the point to begin engaging with disaffected people. Rather, riots evidence the absence or failure of such engagement. The trust and legitimacy upon which dialogue-based policing are built may take years to develop. That said, seeking to engage with protestors rather than cracking down indiscriminately can de-escalate tensions at an immediate, local level. In Flint, Michigan, County Sheriff Chris Swanson discarded his riot gear, set aside his baton and asked protestors how he could help. Encouraged by his actions, the protestors demanded that he: ‘walk with us’. Rather than distancing himself from the crowd or urging them to disperse, Swanson joined the crowd saying that he wanted more of a protest. Whilst this is a potentially problematic attempt to facilitate ineffective protest, the symbolic affirmation of a group matters as seen in the responses to police taking the knee in protests across the country.

This echoes Reicher et al.’s argument that ‘effective public order strategies can transform relationships for the better. Indeed such strategies may be one of the best ways in which one can begin to turn around a spiral of negative inter-relationships with marginalised groups in society.’ For this to work, however, trust and dialogue must be sustained and public order policing operated on a ‘no surprises’ basis. Sadly, reports suggest that some attempts at dialogue and engagement were swiftly followed by a return to tear-gas, pepper-spray and the paraphernalia of riot control. The widespread nature of such actions erodes trust and undermines localised attempts to establish the legitimacy of the police in the eyes of marginalised groups. It highlights the fact that though individuals may reach-out, institutional and cultural change is required. For negotiation to work, it needs to be sustained and persevered with. It also depends on effective communication. To resort to forceful measures within hours of dialogue, sets back the long-term process of building trust and contributes to a localised history of police relations that may shape future interactions. Structures of inequality, of course, constrain what is actually possible.

There are no magic bullets to switch off riots and defuse systemic and racialised inequalities and attitudes. What is abundantly clear, however, is that labelling protestors as ‘thugs’, deploying the National Guard, and seeking to ‘dominate’ the streets may halt riots in the short-term, but only defer explosions of anger and distrust. For PAJ Waddington: ‘Might is not right when it comes to the suppression of rioting. The police may “win the battle” but lose the war if their actions are widely perceived as excessive’. The actions of Sheriff Swanson in Flint may seem merely symbolic, but it is a powerful symbol that begins to communicate that the police are open to dialogue and not blinkered to injustice when it is enacted by someone in uniform.

The anger of protestors is reinforced by the rapid use of force to clear the streets, contrasted to the reluctance to enforce lockdowns during a pandemic that disproportionately affected BAME Americans. Siren calls to ‘go in hard’ should be resisted. Instead, the attempts at dialogue should be re-doubled and woven into reformulated police training, the officers responsible for George Floyd’s death prosecuted, and the painstaking process of addressing deep-rooted inequalities prioritised. Back in the 1960s, Skolnick warned that there was a tendency to privilege ‘order’ over social justice. His view was that a failure to redress marginalisation would undermine the social order. If this pattern is not to be repeated, we need to learn the lessons of that research now. The decision to dismantle the police department in Minneapolis and begin a process of structural reform is a welcome first step, failure to follow through on such promises would leave us ‘looking like jerks’.

Hugo Gorringe and Michael Rosie are both senior lecturers in Sociology at the University of Edinburgh. They have worked together on public order policing and protest on and off since 2005.

More details on their research

(Photo by munshots on Unsplash)