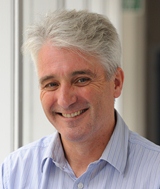 Research Ian is interested in the processes that lead up to catastrophic failure events, from earthquakes, rock fracture, and volcanic eruptions to failure of building materials and bridges, and in quantifying the resulting hazard. He is particularly interested in the population dynamics of localised brittle failure as a complex, non-linear (unreasonable) system, as well as fluid-rock interactions and fluid flow involving fractures in the subsurface.

PhD Opportunity  Catastrophic failure in rocks: How and when? , funded under the NERC ‘E4’ Doctoral Training Programme for a start in September 2023.  Information on how to apply is given here.

Teaching Current teaching responsibilities include pre-honours courses in ‘Earth Dynamics’, ‘Introduction to Geophysics’, ‘Physics of the Earth’ and an honours course in ‘Natural Hazard and Risk’, as course organiser.

Service Ian has just stepped down as Director of Research and ex officio member of the School of GeoSciences Policy and Resources Committee, and of the College of Science and Engineering Research Committee at the University of Edinburgh. He served as a member of the HEFCE Research Excellence Framework (REF 2014) Panel on Earth Systems and Environmental Sciences, and is currently a member of the Scottish Regional Advisory Group for Enhanced Learning and Research for Humanitarian Assistance (ELRHA) and the Research Advisory Forum of the Scottish Energy Technology Partnership (ETP).

Ian moderated the Nature website debate on earthquake prediction in 1999, and served as a member of the International commission on earthquake forecasting for civil protection, chaired by Tom Jordan, following the destructive earthquake in L’Aquila, Italy in 2009. It’s peer-reviewed full report, including findings and recommendations, was published in 2011. This body of work work has generated significant Impact on society.

Awards Ian gave the Bullerwell lecture in Geophysics in 1997, and was elected a fellow of the Royal Society of Edinburgh (RSE, Scotland’s National Academy) in 2009. He completed a Scottish Government/RSE research support fellowship in 2011. He has been a visiting researcher at École Normal Supérieure, Paris (1999), University of Bologna (2020), and visiting professor at the Centre for Mathematical Research, Barcelona (2021) and Stanford University (2022). He was awarded the Louis Néel Medal of the European Union of Geosciences in April 2014, and  gave the Ed Lorenz lecture in Non-linear Geophysics at the centennial meeting of the American Geophysical Union in 2019, available for viewing here. He was elected Member of Academia Europeae, Europe’s Academy in 2022.