In this post Professor Oliver Davies reflects on what theology can learn from Professor Fuentes’ 2018 Gifford Lectures. Professor Davies is the Emeritus Professor of Christian Doctrine at King’s College London, Visiting International Professor, School of Philosophy, Renmin University of China, Beijing, and Guest Professor, Institute for Sino-Christian Studies, Hong Kong . His reflections can be found below. 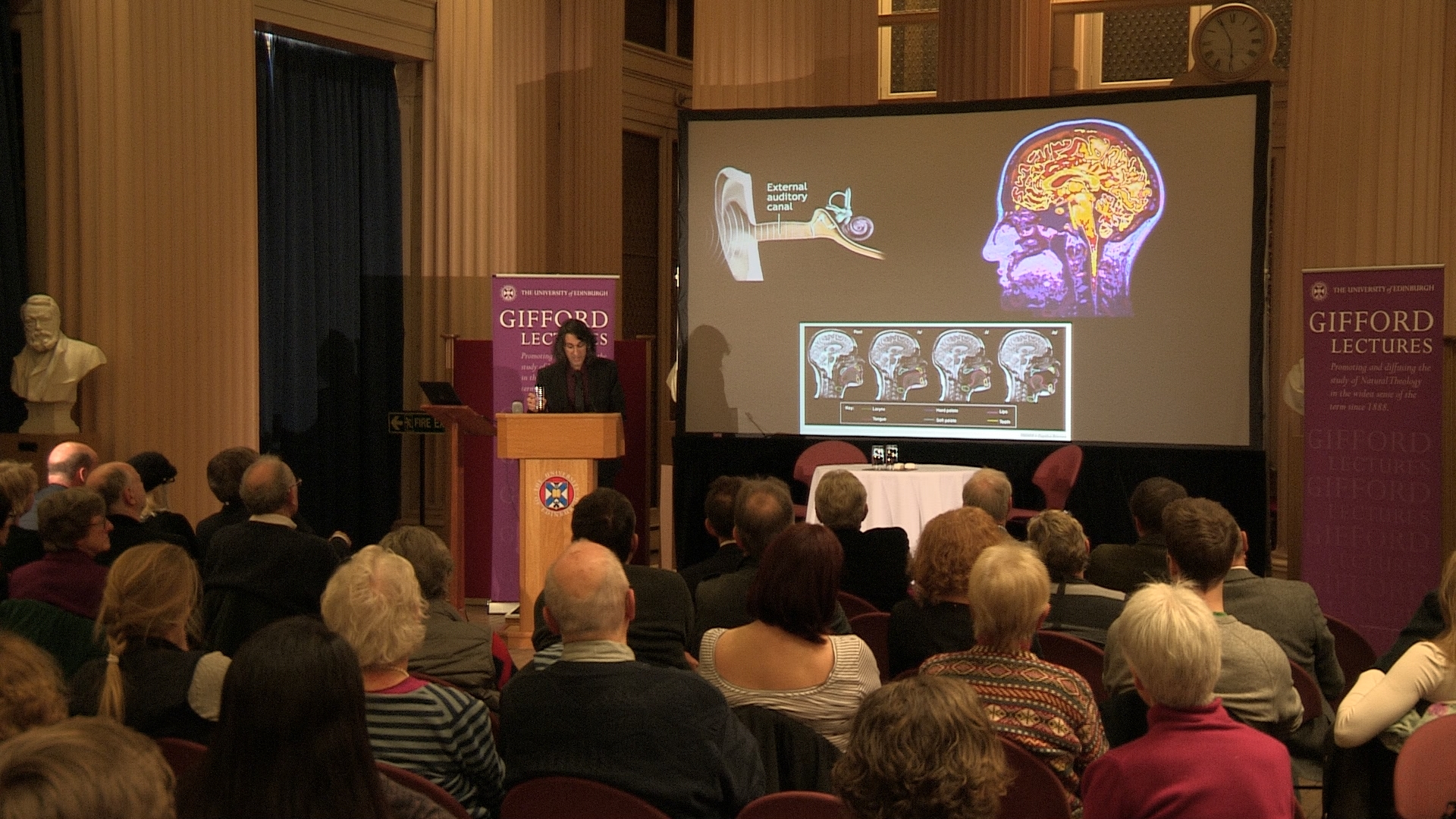 What can Theology Learn?  The Human Niche, Transformation, and Freedom

So what lessons can theology learn from Agustin Fuentes’ Gifford Lectures? In the first place, we need to underline how important this question is. Fuentes is telling us a new version of the human story: the history that makes us human, and how we are in the world as human beings. Self, society and cosmos. AF calls this the construction of the human niche. In Christian theology then we are concerned with the rising of Jesus to life, and our following of him, in the Spirit, as Church, and how this effects change within the human niche. We are concerned with the fullness of human experience, or our human ultimacy, which comes with the transformation of the human niche through incarnation.  But what kind of transformation is it and where? Surely theology today needs to ask this question.

Niche construction implies two kinds of movement. The first is the one we call building, which is static, and the other is what we might call migration, and it is mobile. Both engage the imagination and are creative (what can I build with these tools and materials, and what happens if I paddle my raft down the next bend in the river?). Both imply my sense of being at home in this world, and my belief or conviction that I can be more deeply so.

But distinctive and central to human niche construction is hyper-cooperation. We are a social, altruistic and collaborative species (believe it or not). No hyper-cooperation, no human lineage. But is any kind of movement implied here? Well, strangely, there is. The movement concerned is a rhythmic and interactive exchange of information at incredibly high speeds and density which allow our bodies to bond socially (neurologists call this the ‘social cognition system’). The physicists tell us that everything is information, and so we can add as theologians that when we relate to one another, we become information for one another. This is not deliberate movement therefore but is movement we cannot consciously control: it is the ancient and secret language that our bodies can speak to one another and which everywhere humans speak in the same way. Without this language, human sociality breaks down.

AF will remind us that we can speak this ‘language of origins’ pretty well with our primate cousins, who will speak it back. For our lineage, this is ‘the language of life’. But if we contrast that with the advanced modern language we also speak (whether this is French, English, Spanish…), we can see a striking difference. Of course, these are particular and not universal languages, and the exchange of information here is much less predictable. It may include ‘get out of my way’, or ‘don’t think you are equal to me’ or Paul Celan’s telling Holocaust phrase: ‘Menschen und Nicht-Menschen’. When we use language, it seems that we are communicating information about things, even ourselves, through the materiality of words (and the material properties in the brain of the concepts words communicate). But this is not the same as communicating ourselves: as being for the other the information we ourselves are.

‘Body’ language is millions of years old and shaped our survival as a social species, while advanced language is only tens of thousands of years old. It is in the Neolithic Levant from some 12,000 years ago that we first find widespread social evidence for the advanced language we speak today (mathematics, representations of the human face, higher level social hierarchies and organisation). The power to name the other proved also to be a power to name the other as non-human, and so to prepare the ground for eradicating  other communities through systemic killing, which again first occurs in the archaeological record in the Neolithic period.

It is very likely that our Neolithic survival in this period with such immense change was itself the result of an adaptation on the part of the human social cognition system. This bonding system which had secured our survival began to perform itself culturally and externally, reproducing its rhythms, interactive exchanges and polysynchrony in the new kinds of social spaces that opened up in the more densely populated Neolithic townships. This was another kind of ‘new language’: one of movement, rhythm, chant or song. It was distinctive as a ‘ritual’ language in that it foregrounded the material nature of the sign: the pure materiality which constitutes a word. By freely reducing language to its materially expressive form, in highly focused community contexts, the human body could once again lay claim to our recently evolved advanced linguistic consciousness. Through emphasizing together the materiality of the sign, in the social forms of ritual, dance, chant and song (and later through calligraphy and book illustration), we made ourselves at home in the world again, even as this detached spectator-observer with advanced language. In short, ritual allowed us to reclaim our belonging in the creation, in the human niche, even as super-charged creaturely mind.

It was only a matter of time before the adaptive human social cognition system would also begin outwardly to perform the processes of evaluation which are central to its internal structure. This is the open-ended, processive evaluation by which we pre-thematically discern both the other and our relationship with the other. It is itself ‘participative sense-making’. But at the macro-level, this ‘participative sense-making’ becomes something we recognize as social or relational reasoning. It is open, inclusive and processive and works within complexity: the complexity of persons within their situational contexts. Neolithic religion not only reproduced the rhythms and polysynchrony of the social cognition system but it also laid the foundations for the Golden Rule which insists upon reasoning for and with the other, in contexts of inclusivity and equality, entailing the embrace of complexity.

CHRISTIAN FREEDOM IN THE HUMAN NICHE

To be in a niche is to be in an environment in which we seek to move freely. It lays claim to a freedom in. We move our legs with ‘migration’, and our arms with ‘building’. But what of our social cognition system? Its rhythms are the deepest movement of all, since it is by these movements that we bond and are in life. But this informational exchange through reflexes is pre-thematic and outside our conscious control. How then can we exercise our freedom of movement here, precisely where control is denied?

But freedom in is difficult because, as we might say, it is real freedom: of pulse and breath. The freedom of Jesus on the cross is a real freedom. He is there freely and in the fullness of his humanity. Crucifixion brings constriction and Jesus freely accepts the suppression of pulse and breath. He acts but not through the movement of descending from the cross. Jesus displays his sovereign freedom by assenting to his death through crucifixion, which is to say he freely accepts the reality of his own mortality and contingency and his dependency as creature. Jesus does this for love, and he does so also under the gaze of the Father who holds and sustains him in his creatureliness. The Father keeps the Son fully human, and so – unlike us –  also capable of being fully free under these extreme circumstances. Jesus is set free in the sovereignty of the Creator God. His body is raised to life, in an irreversible new creation, and the Holy Spirit at Pentecost is poured forth from his body, communicating his new freedom in into the human family, completing the freedom from and the freedom to of our advanced linguisticality with the freedom-in-community of our transformational embodied creatureliness. This new freedom-in-community marks a new depth of our belonging in the created order. It potentially marks a new transparency of the human niche, in which building and migration are transformed as stability and global outreach: as global community and identity, in the power of love.

Post-Series Reflections by Oliver Davies / Edinburgh Gifford Lectures Blog by blogadmin is licensed under a Creative Commons Attribution CC BY 3.0