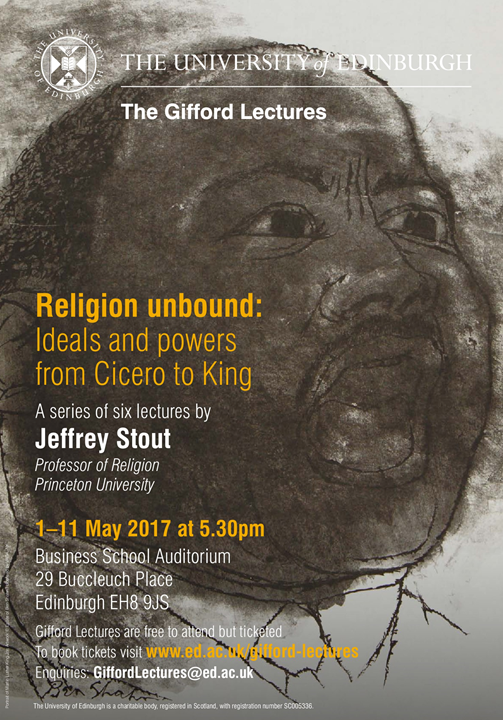 The 2017 Gifford Lectures are less than a week away! Professor Jeffrey Stout will give the first of his six Gifford Lectures this upcoming Monday, 1 May. Stout’s lectures promise to be of timely interest for those concerned to reflect on the relationship between religion and injustice. He gives the following overview of the entirety of his lectures:

“Is organized religion too inextricably bound to the status quo to save our nation and the world?”—Martin Luther King Jr.

The religious defenders of tyranny and oppression bind religion to injustice. The remedy, Adam Lord Gifford thought, is not to secularize politics but to emancipate religion from arbitrary power. Religion is not going away. It will always have political effects. The effects are good if the religion is good and bad if the religion is bad. An ideal of ethical religion animated the abolitionists whom Gifford admired and many activists since. ‘Religion Unbound’ will trace the ideal’s history and explain how its defenders have defined and criticized religion.

Public intellectuals often posit a Great Separation of religion from politics in modernity. They differ over how the Separation was achieved, whether its effects were good, bad, or mixed, and whether it was permanent or temporary. References to a recent ‘return of religion’ assume that a Great Separation in fact took place, that we know what it was, and that it set the terms in which politics was conducted where and while it lasted. Yet religiously motivated reformers and revolutionaries have been with us all along. How would our outlook need to change if we included Milton, Wilberforce, Mott, Emerson, Gandhi, and King in the story?

As in past years this blog will be active to facilitate discussion of Stout’s lectures online. I will be posting lecture summaries shortly after the lectures are given, the videos of each lecture will be posted on the blog, and several contributors will offer their initial reflections to get the conversation started.

For further details on how to join the conversation see How to Engage. As David Robinson mentioned last year, this weblog offers the opportunity to further develop our critical perspective by engaging with the content of the Gifford Lectures online. As David importantly noted, “We are not only seeking contributions from members of the academy, nor is discussion limited to those who practice a particular faith.” Anyone is warmly invited to join the discussion by sharing comments and questions on the content of the lectures.

If you are able you can also plan to attend the lectures in person (book tickets here) as well as this year’s RSE Gifford Discussion Forum hosted by the Royal Society of Edinburgh (book tickets here). This takes place on Wednesday 10 May and Jeffrey Stout will be joined by Cornel West (Professor of the Practice of Public Philosophy, Harvard University), John Bowlin (Robert L. Stuart Professor of Philosophy and Christian Ethics, Princeton Theological Seminary), and G. Scott Davis (Lewis T. Booker Professor in Religion and Ethics, University of Richmond).

We look forward to this year’s discussion!

Anticipating this Year’s Discussion / Edinburgh Gifford Lectures Blog by blogadmin is licensed under a Creative Commons Attribution CC BY 3.0

Lecture One: Religion since Cicero

1 reply to “Anticipating this Year’s Discussion”