Michael: answering the question: “What the heck can I do?”

Electrical engineering graduate Michael Kozicki is an award-winning professor at Arizona State University. He tells us how the closure of its campus during the Covid-19 pandemic has prompted him to take on research at home that’s making a difference in local hospitals.

Current treasured object: My Yamaha CGX102 nylon string guitar. I’m not exactly a concert guitarist (I’m not exactly a guitarist) but I’ll pick away at a sweet tune or thrash it through an absurdly powerful effects-laden amp whenever I need “therapy”. I love that guitar and I think it likes me, most of the time.

Song of the moment: “Time Flies” by Porcupine Tree. The music and lyrics are outstanding and definitely fit the times. Honorable mention goes to “Wander With Me” by Tom Misch (featuring Carmody) – that’s a song that can transport me far from anything.

I was motivated and had a purpose.

When I think about what has happened over the past few months, I feel like I should have spent my time adopting the fetal position and hoping it’s all a bad dream. But in reality, I decided to play offense instead.

In mid-March, I had just I come back from a trip to Edinburgh. It was just before the world shut down, and it was clear that panic and despondency were hitting our healthcare providers hard. At first I thought “I’m not a medical or health expert – what the heck can I do?” But that question was niggling. I decided to seek out and join one of the innovation teams my university had established in the hospitals, and the answer quickly presented itself.

There wasn’t only a growing shortage of personal protective equipment (PPE) but also a worrying lack of the materials that go into items such as masks and gowns. So, having taught classes in micro-contamination for the semiconductor industry for decades, I thought I could apply this knowledge to solving these problems. In particular, since very few people were looking at ozone gas as a means for sterilising and reconditioning masks, I decided to study this approach. I was motivated and had a purpose.

And then my university shut down.

Faced with a period of frustrating months without the tools to work, there was only one thing for it. I loaded up the car with equipment from my lab -a minimum number of parts and instruments that would allow me to do some meaningful research – and claimed a spot on a shady patio at the back of my house. I scraped my knuckles and cut my hands making a usable ozone dosing chamber but I was lacking one rather important item – something that would generate ozone! The small commercial units were all sold out online – a result of panic buying by people who wanted to sterilise their homes and offices with ozone (not a great idea for the untrained, by the way) – and then, as if by some divine intervention, I stumbled across a group of students who had the same idea as me about using ozone to sterilise masks. They had built a low cost ozone generator, but had no way to test it! It was a match made in heaven and allowed the project to move forward quickly.

And we got some great results from the ozone work, in terms of how it affected N95 mask materials and how effective it was in killing viruses. The students eventually designed and built a complete sterilisation unit that was very inexpensive and easy to operate and started deploying it to healthcare facilities around the state. 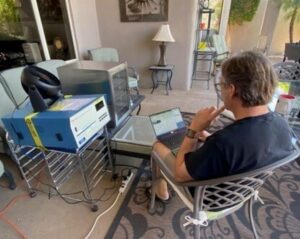 Michael’s home lab on the patio

Then I moved on to another pressing issue. The lack of masks and the materials to make them forced the hospitals into considering alternative mass-produced fabrics. The problem with this is that nobody really knew how efficient these materials were at trapping particles. Since I already had particle counters in my “home lab” as part of the ozone testing work, I set up a “controlled” space in my house (a small room with hard surfaces that was easy to control particles… in other words, the bathroom!) and tested over two dozen fabrics and combinations for trapping efficiency. Two fabrics were clear winners and the hospitals are now making masks out of them.

I feel the past few months have been a powerful motivator for me. I get very excited when I learn something new.

I feel really good about the fact that I didn’t give in to my initial “what the heck can I do” response to the pandemic. I feel like I actually did something useful. But the work also made me realize how fragile the global healthcare system is. I had no idea how vulnerable we all are to supply chain issues. Even though it’s not really my main area of research, I would like to continue to look at new and sustainable ways of using ozone to sterilize equipment and surfaces to avoid the use of thousands of gallons of disinfectant which is not only difficult to get in a crisis but also is not very environmentally friendly (ozone is a pollutant too but it is easy to deal with). I also have some ideas for a new type of mask that would be a lot more breathable and comfortable to wear for long periods.

So I feel the past few months have been a powerful motivator for me. I get very excited when I learn something new. If I have an experiment underway, I treat every result like a birthday gift – some are amazing, some are disappointing, but the anticipation is awesome in any case!

Michael: answering the question: “What the heck can I do?” / The Edinburgh Alumni Blog by blogadmin is licensed under a Creative Commons Attribution CC BY 3.0

Leo: Who are we in a crisis?