Connor Spratt (Psychology 2020) writes candidly about his battles with an eating disorder while a student at the University, and how he used social media to help himself and other men who are experiencing similar issues.

Current treasured object: My nunchucks. Picked them up as a lockdown activity but they are my therapy now.

The first thing I noticed when I woke up this morning:  I noticed one of my plants fell over, looked like it didn’t get a great night’s sleep.

In my second year of university, I  I wanted to give myself a new challenge. However, when I reflect on this, my goals ran much deeper than a new challenge. I never really supported myself growing up, believing that I was the odd one out, the one who would always be lagging behind and never really standing out from others. This was down to a few reasons. One was my undetected learning difficulties that led to many thinking I was just intellectually ‘slow’, to put it nicely. However, the biggest factor was my body. I was always the bigger kid, which I was made painfully aware of over the course of school and the likes. Even when people were kind to me, it was a thought that stayed with me.

When I left home in the north-west of England to come to the University of Edinburgh, I saw it as an opportunity to reinvent myself. Cliché, I know, but it was incredibly important for me. I explored different ways of doing this, but one stuck with me instantly. Boxing.

So I joined the University Boxing Club. I made many great friends and great memories. It turns out I wasn’t too bad at it neither, eventually being elected Captain and even going on to work as a coach for a year. On top of this, it gave me a good routine and goals outside of university deadlines and to work towards. 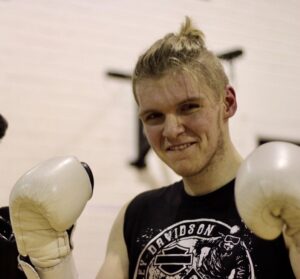 However, I quickly fell into some real issues. A few months in, I signed up for my first competition. I thought this was a great idea. Having a boxing match would be the best end chapter I could ask for with this reinvention that I so desperately wanted. However, the preparation for this match quickly spiralled me into an eating disorder.

During my preparation and training, I had internalised the idea that in order to be seen, acknowledged and celebrated, I had to lose weight. I was receiving compliments and recognition constantly. It made sense for me to persistently try to lose weight, as that was how I got to the place I wanted. However, this goal had no end.

Over time, I thankfully got help and managed to recover fully from my eating disorder. However, during my time with this I felt alone. I had great friends, family and clinicians to help me, but I still felt like the odd one out. This was because I rarely saw any men suffering with an eating disorder. I would search for others’ stories and experiences of these issues to hopefully guide my own recovery, but never found anybody that I could relate to as a man.

At the start of the Covid-19 pandemic, I decided to start my own Instagram account (@recoveryconnor) where I would share my own experiences, as well as the experiences of others, and developments and controversies within the eating disorder sphere. Men’s experiences of eating disorders are not heard. This means many others will not recognise their own suffering or feel that they can’t be open, as they are the odd one out in this struggle. I wanted to be the man that I needed to see when I was struggling with my issues.

I believe everybody should find what they feel most passionately about and engage in a way that helps to bring the change they need.

Since doing this, I’ve met so many great individuals and organisations working within this sphere. I have spoken to UK parliamentary groups, written for national publications and even appeared on a TV segment. It has also helped guide me in engaging further with offline actions, such as volunteering with a Scotland-based eating disorder charity. On top of this, it has helped me really see what I want to do with my efforts going forward. Namely, working with men with eating disorders.

Although I am less active nowadays online, the opportunities gained through it have been invaluable to say the least. I believe everybody should find what they feel most passionately about and engage in a way that helps to bring the change they need. For me, this was starting an online account to help spread a message that I hadn’t seen myself.

Nowadays, I want to engage more in offline work whilst working in this same sphere. If everybody engaged with the subjects that need to see change, then we would start seeing real progress where it is needed.

Connor: on helping men face their mental health / The Edinburgh Alumni Blog by blogadmin is licensed under a Creative Commons Attribution CC BY 3.0

Community • Life at the moment • Uncategorised

Lauren: on working to enable the circular economy

Breigha: how to do the work thing