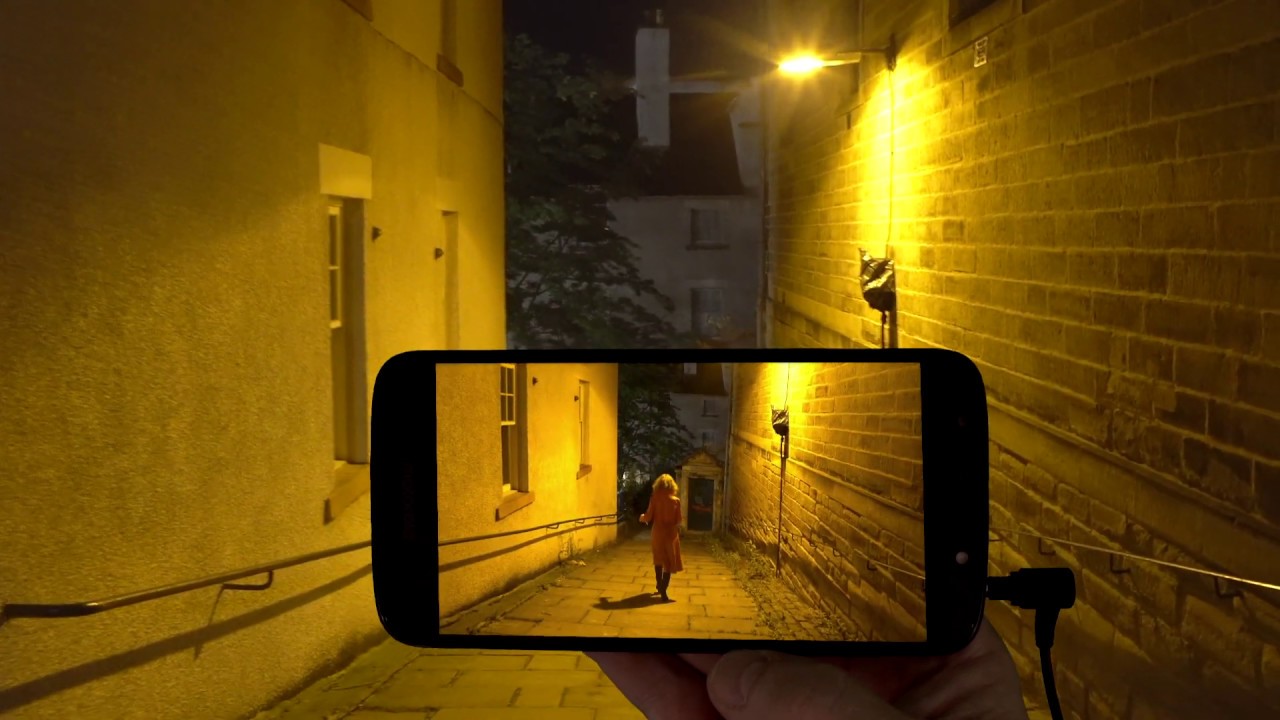 “Following Janet Cardiff’s voice and walking in her footsteps, as you participate in Night Walk for Edinburgh you will be led through the backstreets of Edinburgh’s Old Town, unravelling a disjointed tale – part game-playing, part surrealistic poetry, perhaps even a murder mystery – layered with history, invention and memories. One of the biggest hits of last year’s Edinburgh International Festival, Cardiff and Miller’s Night Walk for Edinburgh is now a permanent part of The Fruitmarket Gallery’s collection. Commissioned for the city of Edinburgh by The Fruitmarket Gallery.

Night Walk for Edinburgh is a 50 minute walk through the Old Town of Edinburgh after dark. Following a film on your tablet or smart phone and a soundtrack on your headphones, you will walk up Advocate’s Close and along a route that weaves around the Royal Mile before returning to where you started. The route involves c.120 steps up and 30 down, and uneven ground, and is entirely in public, un-invigilated space. It is intended to be a solo experience, but as the walk is at night we suggest that you may want to enjoy it in pairs or small groups with a maximum of 6 allowed per slot. Although it is important that everyone has their own screen and headphones.”

“‘Walking is like the flow of history. One footstep after another,
one event after another. Every time we choose an action or
direction we change everything that might have been.’
Night Walk for Edinburgh
Janet Cardiff (b.1957, Brussels, Ontario, Canada) and George Bures
Miller (b.1960, Vegreville, Alberta, Canada) last showed their work in
Edinburgh in 2008, with their Fruitmarket Gallery exhibition The House
of Books Has No Windows. They return to Edinburgh to explore its
streets in a new video walk. Cardiff and Miller have been making audio
walks since 1991, and began making video walks in 2001, for locations
across the world including San Francisco Museum of Modern Art
(2001), dOCUMENTA (13) in Kassel, Germany (2012), and the
13th Sydney Biennale (2014). The only other walk they have made for
the UK is The Missing Voice (Case Study B) (1999), an audio walk that
takes you through the streets of the East End of London from the
Whitechapel Gallery.”

“In both the audio and video walks, Cardiff ’s voice leads the listener’s
footsteps, gently nudging you along the route, whilst also offering
disjointed observations and reflections that as a whole weave a
nonlinear, and often unsettling, narrative. Filmed and edited by Miller
using a Steadicam and binaural sound recording, the video walks
– called ‘physical cinema’ by the artists – add a second layer to the
sensation of moving through the city. Created using multidirectional
microphones in place of ears, binaural recording results in a sound
environment that is spatially logical, and can often be difficult to
distinguish from its real world equivalent. The effect can be uncanny,
as sounds and images double up, merging fiction and reality, in turn
intensified by the dreamlike quality of Cardiff ’s voice.”

“Through such well-trodden streets, this is neither history walk nor
ghost walk, though it evokes both. Staged at twilight, it not only sits on
the threshold of day and night, but also slips between the gaps of the
usual tourist trails and guided walks, as you navigate the city obliquely,
as if on another plane of reality. At one point Cardiff says: ‘Sometimes
I don’t know if my imagination is leaking into my reality, or if I’m
remembering something.’ Repetitions of signs and figures accentuate
this feeling, flitting between the incidental and the significant, like
clues in a detective novel. Edinburgh emerges as a city of doubles, of
Jekyll and Hyde, of the old and the new, of parallel realities, mingled
with uncanny sightings of Cardiff ’s red-coated doppelgangers. This
atmosphere is redoubled when the screen glitches and jump cuts to
another reality, in which a forensic team appears to be investigating a
crime that took place on the streets through which you move. Who has
been killed? And when did this take place? Like Cardiff ’s unfinished
book, that she tells us she left on the plane, the walk does not offer
answers, creating unease – what have these streets seen?”

^Some screenshots taken from about halfway through the video. Unfortunately I didn’t twig that I could screenshot the video earlier, otherwise I would have very much liked to have recorded a few of my favourite moments, such as the scene in the window near the very beginning, the horse statue and creepy men in glasses coming towards you, as well as Kathryn Joseph and Adam Clifford’s performances.

A very enjoyable experience. I loved the medium and the idea, blending reality and experience with film and fiction – a treat for the senses. I particularly enjoyed the audio, as mentioned above audio was recorded using multidirectional mics, so with headphones on the sounds are so eerily realistic that I found myself constantly unable to tell if they were coming from the film or not. There was one particular moment around the second-to-last screenshot I’ve included, where there are a group of menacing looking dark figures above you on the path, and the audio captures their speaking and the heavy breathing of a ventilation system to your right, and the vent is also really loud in real life, so the effect is really disconcerting and overwhelming and makes you feel incredibly paranoid – the narration also reaches a critical point here as she talks about the plot of a book which seems to match the films events and you really question the reality/narrative of the piece.

Night Walk For Edinburgh / Bridie Gill by blogadmin is licensed under a Creative Commons Attribution CC BY 3.0