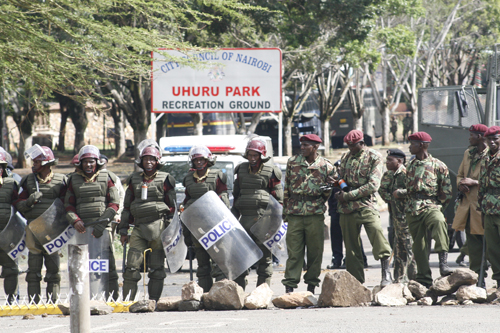 Fighting Police Brutality in Kenya: Let’s not erase the work that has been done so far

In light of the ongoing protests against police brutality in the USA following the police killing of George Floyd, some Kenyans have castigated their compatriots for caring about problems that are far away while ignoring the same issues in Kenya.

While it is true that many people do not take the problem of police violence in Kenya seriously, this blanket assumption that all Kenyans do not care is not only misguided, it also erases the work of many individuals and organisations have done to fight against police brutality in Kenya. There are many Kenyans who have dedicated their lives to addressing this challenge.

They document cases of torture and police brutality in Kenya. They publish an authoritative annual report on that highlights the cases they have documented over the previous year. Usually the deaths they record run to the hundreds, a significant majority of which are summarily executions; that is, executing people who are suspected of a crime without subjecting them to a fair trial. They have recently reported that they have documented 56 cases of police brutality related to the curfew introduced to tackle the spread of Covid-19.

The Mathare Social Justice Centre (@MathareSJustice) published a ground-breaking report, Who is Next? in 2017. The report, based on participatory-action methodology, documents more than 50 cases of extra-judicial killings in Mathare. This report triggered a series of conversation and also spurred the emergence of other social justice centers such as the Kayole Community Justice Centre (@KayoleCJC) and the Dandora Social Justice Centre (@DandoraJustice). Together, these community organisations form the Social Justice Working Group (SJWG) or the Uhai Wetu Coalition (@UhaiWetu). They organise the Saba Saba March for Our Lives annual to highlight the high number of police killings in informal settlements.

MUHURI is a human rights organisation working mainly in the Coastal counties and Garissa County. They investigate cases and bring in other actors to help victims get justice/ pursue accountability. They were instrumental in the Kwekwe Mwandaza case where two police officers were found guilty of murder and jailed for seven years.

KHRC has been campaigning against police brutality for a long time. In the 1990s they were publishing a quarterly repression report that documented cases of police brutality and also held street protests.

They do critical work of supporting human rights defenders who are under threat for their work – including reporting on cases of police brutality.

Amnesty International-Kenya works to document cases of police brutality, in order to effectively demonstrate that it is a systemic problem that requires policy solutions. They advocate for community policing strategies with youth organisations, greater command responsibility and closer oversight.

They run an online portal that aggregates information about police brutality from the various organisations in Kenya. To date, Missing Voices has verified 285 extra-judicial executions and 153 enforced disappearances, and 1,732 cases that are yet to be verified. They also track the cases that are taken to court.

They support victims of police brutality through the court processes. They became widely known after one of their lawyers, Willy Kimani, was killed by police officers for his work alongside Josephat Mwenda, the victim of police brutality that he was representing in court, and Joseph Muiruri, their taxi driver.
For sure, there is a lot that remains to be done and more Kenyans needed to care about this problem and contribute to addressing it. However, this new effort should be to build on the work that has already been done and continues to be done; not erasing it.