This blog was written and translated by Maria, 13 years old from Romania, who has been working with the Community Safety and Mediation Centre Foundation (CMSC), the Romanian partner in the Improving Justice in Child Contact project

Hi! I’m Maria, I’m almost 14 years old and I have two older sisters. My story is not exactly the most beautiful, but thanks to this I have become the person I am now. 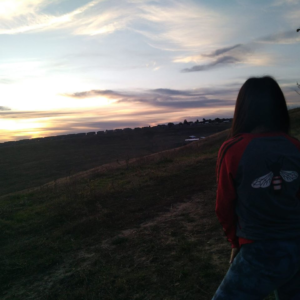 Not long ago, my parents broke up, and everyone who heard that said they were sorry, but I’m not sorry, not my sisters or my mother either. I currently live with my mother, my middle sister and my grandfather. Wondering why my parents broke up or why I’m not sorry? Well, I think I should explain a little bit. I’m the youngest, and after I was born things got a little complicated. After I was born, my father started drinking and becoming aggressive. I called the police several times, but due to the fact that my father had a relative in the police who has an important position, all the statements disappeared all the time from the file and the situation never improved. Over the years, many complaints have been filed with the police for domestic violence and other things by me, my sisters or teachers I had told the next day when my father beat us or even when he broke my mother’s leg, but he always escaped clean.  Every time he ran out of cigarettes or alcohol he would send me to buy them, and every time we had money he would take it from us.

In 2017 I left home with my mother and sisters, but due to the fact that we could not afford to rent, we had to return. In 2018, in April, my father broke my mother’s leg and, of course, the police did nothing even then. Following what happened, we decided that we must leave. In September 2018, we moved in with my grandmother from my mother, who was almost the same as my father, except instead of hitting us, she verbally assaulted us. However, I lived with her quite a bit (about 9 months). 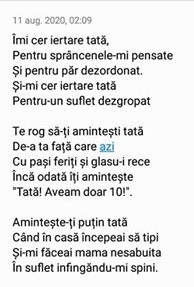 Please remember father
Of your daughter who today
With injured steps and her cold voice
Once again reminds you:
“Father! I was only 10!”*

Remember, father, for a while,
When you started yelling in the house,
And called my mother reckless,
Sticking thorns in my soul.

*Observation: Maria wrote this poem to her father, who abused her, her sisters and her mother from the day she was born until she was 11 years old.

In February 2019, my mother took her heart in her mouth and started a court process. In June 2019 we moved from my grandmother to live with my maternal grandfather who is an extraordinary man. Leaving that aside, the court process was not over and in November 2019 it was the hearing of the minors. Normally it should have lasted at least 15 minutes, we were heard for 2-3 minutes, 3 minutes in which I was asked if my father was drinking alcohol or was aggressive.

I answered that I do not think there is a day a week when my father does not drink alcohol or hit us, then I was asked if I get along with my mother and I said yes, and the last question was if I want to stay with my father or if I want to keep in touch with him to which I clearly answered NO. One week later, it was the last time witnesses were called. For us the witness was our grandfather, and for my father it was his older sister who lied under oath saying that our mother did not take care of us and that our mother consumed alcohol. When the judge asked her who went to parents’ meetings or celebrations she contradicted herself from what she had said a few seconds ago (that my mother didn’t take care of us) by saying that my mother went. The judge’s decision should have come a month after the last hearing in November 2019, but it came in June 2020. 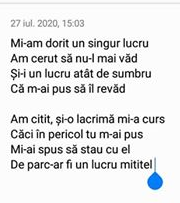 It was only one wish I have had,
I asked not to see him again
And it is such a somber thing
You demand that I must visit him.

I read* and a tear slipped my face
Because in danger you have put me
You told me I need to stay with him
As if it was a little thing.

*Observation: The judge ordered Maria to stay and visit her father, even after 11 years of constant hitting and domestic abuse against her, her sisters and mother. The poem is about her reading the court order.

Maria now wants to start a support group for other children who are going through the same experiences as her, and she became the youngest volunteer of Community Safety and Mediation Center, where she helps with transcripts from audio recordings of meetings with judges, lawyers and therapists, to be made into future podcasts. She dreams of maybe starting a dance group in the future where she can turn her trauma into art.

A senator in Romanian Parliament, Iulia Scantei, visited us on the CMSC meeting with Aurora Group (the Romanian version of Yello!) and talked with the girls in the group. Our ‘Maria’ agreed to attend an online webinar (audio only) organised the very next day and talked about her experience in the court. The senator is in the Judicial Committee in the Parliament and promised us that she would lobby for a change in hearing of minors from domestic violence cases. The recording of this webinar is  available HERE and has 28,000 views! The two-hour webinar entitled ‘Our voices are listened and protected!’ was prepared the night after the visit of the senator to CMSC.

Two weeks after the visit and after last week’s general election of Romania, Iulia Scantei was re-elected senator in the new Parliament. We will continue to work with her for the entire mandate, hopefully. 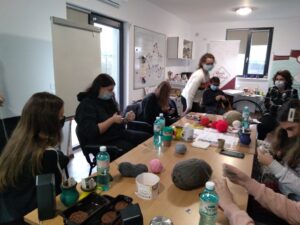 Photo credit: CMSC. CMSC rural premises – Girls in #Aurora group learning to prepare ‘friendship bracelets’ and talking with the senator about challenges for women and girls when a patriarchal society is still in place. 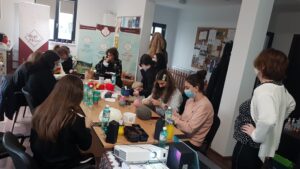 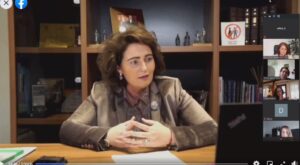 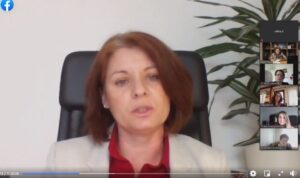 Photo credit: CMSC. ‘Our voices are listened and protected!’ webinar – lawyer Liliana Stefanescu Goanga from Brasov talking about the need for children decisions and children rights to be respected by the Court. 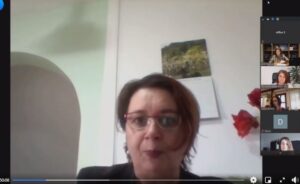 Photo credit: CMSC. ‘Our voices are listened and protected!’ webinar – Laura Albu, IJCC project coordinator from CMSC talking about the need for changing Romanian legislation and enhancing protection for children according to the Istanbul Convention provisions. 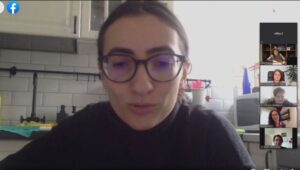 Photo credit: CMSC. ‘Our voices are listened and protected!’ webinar – Unseen face of our 14-year-old girl ‘D’ heard during the 2 hours webinar, talking about her experience in the Court and making recommendations for system hearing changes throughout the entire event.