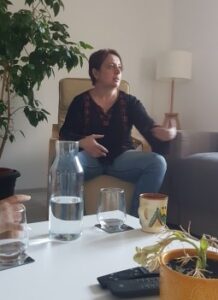 Improving Justice in Child Contact (IJCC)/CSMC. Image of Laura Albu from the CMSC interviewing mother and daughter in a safe house during COVID-19 pandemic

Despite the COVID-19 outbreak, the Community Safety and Mediation Center (CSMC) project team from Iasi, Romania, took to the road across the country to find out ways to better protect girls and boys who face Court Order decisions for contact with their abusive parents.

Independent interviews with children and their mother who have survived domestic violence were conducted in order to find out if new legislation adopted after harmonising internal laws with the Istanbul Convention ratified by Romania in 2016 has had a direct impact on their lives in previous years. The findings showed diversity, from one region to another, and from one Family Court to another. For instance, in certain cases, Court hearings with minors were superficial and short, children were not prepared to face the hearings, and the trauma they were suffering due to emotional and physical abuse was not handled properly: judges in the field of domestic violence were given no or not enough specific training sessions;  judges were overloaded with an incredible number of family cases to hear everyday. As a result, he/she did not have enough time to look into the cases, and to compassionately interview children participating in the hearings.

There were no special interview rooms to accommodate children with specific needs and to avoid re-victimisation. There were also no specialised Courts for Minors and Family, and Brasov city is lucky in having a group of dedicated judges, even though they are working under pressure due to hundreds of emergency protections orders issued by police against aggressors to be transformed into protection orders later by the Court.

The IJCC project team from Iasi succeeded in organising a meeting with judges, lawyers and therapists working with children facing domestic violence in July 2020 in Brasov with the help of local Association Women got Involved and a local women lawyer. During the meeting with all the professionals, we discussed the findings of  a pilot community project in Brasov conducted by a lawyer, Liliana Stefanescu Goanga, in terms of covering the costs of therapy sessions for all children who needed to have court hearings for child contact decisions from families with domestic violence. 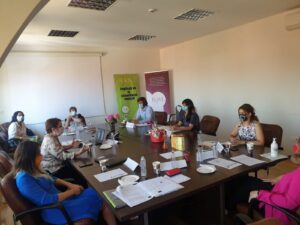 IJCC/CSMC. Images from the IJCC project meeting with judges, lawyers, therapists and NGOs in July 2020 in Brasov, Romania. 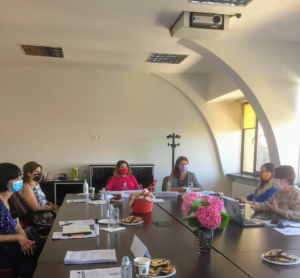 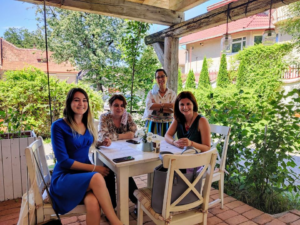 IJCC/CSMC. Image of Liliana Stefanescu Goanga, a lawyer; Andrea Fedor and Elena Beloiu from the Women’s Got Involved Association, Laura Albu from the CMSC project team at the IJCC project meeting in July 2020 in Brasov.

After repeated therapy sessions, the first achievements were reported in the way children interacted with the judges, their testimonies in the courts, and how they dealt with trauma. Judges participating in the meeting in Brasov were also able to hear the recorded messages from an expert group of children from Iasi about their traumatic experiences in the Court regarding their hearings, and to make recommendations regarding best practices in the procedures they used in local family Court. The meeting was recorded and recommendations from all participants will be included in the future podcast dedicated to finding resources and good practices at national level for developing support packages for improving child contact decisions in the Romanian Courts and also for identifying missing links in the new legislation regarding protection of women and children facing domestic violence.

WE GO FURTHER TOGETHER! Through partnership and solidarity we build a better world for all women and children in Romania!