All of us at Yello! (the young experts advising the Improving Justice in Child Contact project) are motivated young people, and we’re always ready to go, to jump onto the next project or meeting or whatever we have planned. It’s just who we are and why Yello! have managed to do so many amazing things. The lockdown that began in March due to the unfortunate Covid-19 pandemic really put a damper on our plans for Yello! this year and stopped us from doing a lot of things. Our meetings with MSPs in Parliament were cancelled, and so was our big trip to Bulgaria for the final conference of the project. It was all very sad and such a shame, but what was even more sad and quite frightening, was that now due to the lockdown, thousands of children and young people and their mothers would be potentially put in danger as they had very restricted means of getting help or fleeing a harmful situation at home. Domestic abuse rates skyrocketed in the worst possible ways, and we knew we had to do at least something small to help out — or at least let someone out there know that they’re not alone and what they’re going through will pass. 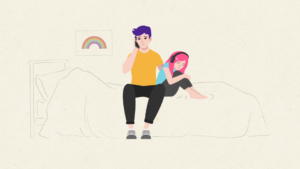 And that is how we got around to making two animations about domestic abuse awareness and all the help out there. You may have seen or heard of the animations, or know how well they’ve done, but you might be wondering, how were they made in lockdown over Zoom? By a group of children and young people? Well, I’m here to tell you a little bit about the experience and the process of making the two animated videos.

It all started by us meeting the team at Media Co-op over Zoom, and discussing ideas for the two videos and what content should be in them; a storyline, the main themes/messages conveyed, what kind of characters, the visual aspects of the animation and how it was going to look. That initial meeting was very intense, but we got the opportunity to really brainstorm ideas and share our thoughts and opinions on what we wanted the animations to be, and the women at Media Co-op listened to us and took in everything we said. It was such a fun time working with them!

After that initial planning/brainstorming meeting, we had another Zoom and we got to read the first draft of the script and share our thoughts on the wording (the script was written by adults, but the videos are aimed at younger people and children, so we, as young people had to approve if the language was suitable, made sense to us, or was cringey at all) and had a look at some first draft sketches of what the characters could look like and the general style of the animations. This was quite fun actually, getting to see the bare-bones of a video that is now complete, and being part of planning all the little things about it.

The script was written by adults, but the videos are aimed at younger people and children, so we, as young people had to approve if the language was suitable, made sense to us, or was cringey at all.

We continued to have Zoom meetings at least once a week (sometimes twice a week) for a couple of weeks, and during that time we finalised the script, the visual style of the animation — the characters and what they look like, as well as the background setting and all the other things that are seen in the animations — and even got to decide on the voice actors for our animations. The videos were really coming together and it was wonderful to see how much progress we had made in just a couple of weeks, all done remotely over Zoom!

At that point we got to rest for a while, and the Media Co-op team worked really really hard to finalise the videos (after all, the sooner they came out the better, so that people can be aware of these things and get help if they need it) and they did such a fantastic job turning our ideas and thoughts into real videos that people can now watch on Youtube! It’s just so so cool!

After all, the sooner the videos came out the better, so that people can be aware of these things and get help if they need it.

Before the videos were released for the public to see, we of course had to approve them and make sure that everything was right, and put the final touches in. We had a small viewing party over Zoom for both animations and got to see all of our hard work come together in a 60-second video. We were so pleased with the animations when we saw them that we didn’t have anything to improve in them, and soon enough they were released and everyone got to see them!

Our animations were on the news and there were articles published about them and it seemed like everyone was talking about them. It made me so proud and happy (and the rest of Yello! too) to see that we were getting such a wonderful response to them. It was a surreal experience when everyone was talking about our work and shouting Yello! out on Twitter and the TV. It was awesome …

Yello! believe that no matter what you’re going through or how tough it is, you’re not alone and you will get through it.

Looking back on the animations now and the whole process of making them, I have to say that it was a fantastic experience and I’m so proud of Yello! and Media Co-op for making not one, but TWO animations happen during lockdown! I really, really hope that the videos reached those children and young people in need of help and made them feel less alone. Yello! believe that no matter what you’re going through or how tough it is, you’re not alone and you will get through it.