The Improving Justice in Child Contact project was set up to address the barriers to children’s participation in disputed child contact. Child contact is communication, such as phone calls or visits, between a child and a parent with whom the child is not regularly living. The project considers court processes in particular, asking how they can recognise the human rights of children and non-abusing mothers, with a particular focus on how children’s views can be duly considered in decisions that impact on them.

On June 10 2020 the Improving Justice in Child Contact project worked with Women Against Violence Europe (WAVE) network and the European Women’s Lobby to host an international seminar on these issues. Over 80 people attended the seminar, from more than 20 countries. 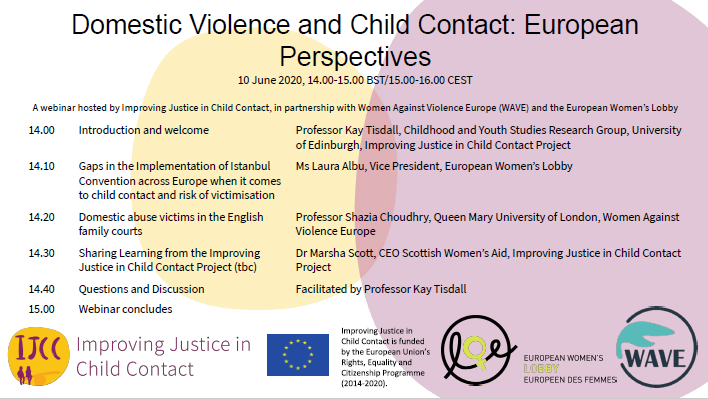 Laura Albu, on behalf of European Women’s Lobby, presented on the implementation gaps for the Istanbul Convention in respect to child contact. The Istanbul Convention recognises that contact orders present serious safety risks for children and women in cases of intimate partner violence and obliges States Parties to ensure that judicial orders take domestic violence into account. Nevertheless, the European Women’s Lobby’s analysis has found that only 35% of countries have specific provisions to ensure that domestic violence is considered by the courts. In 71% of countries, children can be forced to have contact with perpetrators of abuse, against children’s own wishes. Laura reported that the consequences of these failures had been fatal for women and/or children in countries including Belgium, Finland, Italy, Hungary, Serbia and Spain.

Professor Shazia Choudhry, on behalf of Women Against Violence Europe, presented experiences of the family court processes in England. Her research found that courts’ failures to understand and consider domestic violence led to unsafe decisions, and women and children could be put in danger. One woman in her study reported that she wished she had never gone to hospital, had just kept on coping with the abuse from her partner – because what happened in the Courts stopped her being able to protect her children from abuse. Shazia described courts’ failures to uphold children’s rights, with many examples of courts not listening to what children had to say, including where children were saying that they were frightened.

Dr Marsha Scott, on behalf of Improving Justice in Child Contact, made the final presentation. Despite all the different legal systems and processes across the 5 countries involved in the Improving Justice in Child Contact project, we see the same issues: children being treated as collateral damage. Marsha emphasised that children’s and women’s rights are inextricably linked, and that a key part of the IJCC project is to make those links visible. Marsha described the work of Yello!, the young experts advising the Improving Justice in Child Contact project. Yello! had designed two animations to support young people affected by domestic violence, because they wanted young people to know that they were not alone. A key part of this work was that young people were designing materials for other young people, providing powerful messages to share amongst peers.

You can watch all IJCC videos and listen to our audio recordings on our media channel.

Watch the animations designed by Yello!

You are not alone

If home is not safe

Children’s access to a system of complaints and redress in family law: accountability for children?