The Bulgarian Gender Research Foundation (BGRF) is taking forward the Improving Justice in Child Contact project in Bulgaria. BGRF hosted a seminar for the project in September 2019 in Sofia. Associate Professor Diana Kovacheva,Ombudsman of the Republic of Bulgaria, was the special guest at the seminar. The Ombudsman recently sent an opinion to the Ministry of Justice noting that children were victims of domestic violence together with the non-abusive parent. The Ombudsman raised concerns about the lack of services for women and children affected by domestic violence. The Ombudsman’s opinion was submitted as part of the current working group on amending the Law on Protection from Domestic Violence. BGRF are also part of this working group and are arguing for stronger protection for children including ensuring children’s safety in relation to custody rights. 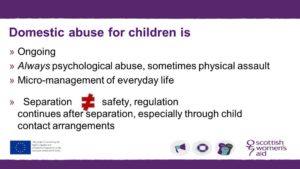 The keynote speaker at the seminar was Dr Marsha Scott, CEO of Scottish Women’s Aid, who described the work that has taken place in Scotland developing a new law recognising and criminalising the full range of abuse perpetrated against women and children affected by domestic violence. The presentation highlighted the ongoing risks to children and women, including homicide, taking place during post-separation contact between perpetrators and children.

Elena Krasteva, lawyer and coordinator of Alliance for the Protection against Gender-Based Violence, presented initial findings from a review of court decisions on child contact. In only 3 out of 74 cases was there evidence in the court files that the child had been enabled to express their views. An important part of the seminar was to share the Power Up/Power Down methodology, a model for enabling participation by children and young people affected by domestic violence. 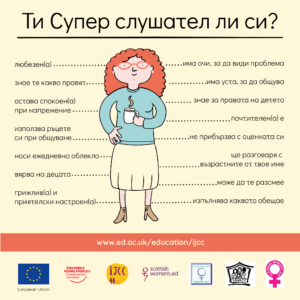 Super Listener: what children and young people want from the adults they are working with. Developed by young people in Power Up/Power Down and now available in 9 languages from www.ed.ac.uk/education/ijcc

A key part of BGRF’s work under the project has been to make the international organisations monitoring Bulgaria’s progress to tackle gender-based violence aware of the issues around child custody and domestic violence and the importance of enabling children’s participation. Bulgaria was being examined by the UN Committee on the Elimination of Discrimination against Women (CEDAW), who published their concluding observations in February 2020. BGRF had previously contributed to a joint submission from civil society institutions to CEDAW, which included concerns that the courts approach to child custody and visitation gave preference to the abusive father over the children’s and the non-abusive parent’s safety. The Committee’s concluding observations included recommendations to improve access for protection orders for women affected by gender-based violence, to introduce systematic training for justice and health stakeholders on gender-based violence and to ratify the Istanbul Convention (the Council of Europe Convention on preventing and combating violence against women and domestic violence: article 31 requires parties to take measures to ensure that the rights and safety of children and non-abusive parents are safeguarded in the context of child custody and visitation).

Supporting women and children affected by domestic abuse throughout COVID-19