It has been nearly a year since I shared my experience about my court ordered contact with my father.  I am now fourteen years old and my brother is twelve. I would like to add a few updates to my story and to tell you what I want to happen when people hear what I experienced.

I was made to see my father, until I was fed up with him hurting me and my brother, and putting us in unnecessary danger and then I wanted to stop seeing him. 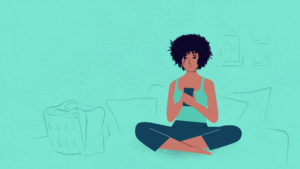 You are not alone, a video designed by Yello!, young experts advising the IJCC project, for young people affected by domestic violence.

The first time I ever remember him hurting me was when I was around five or six. He grabbed me by the head and pushed his nails into my head whilst shaking it. He did this so many times when I lived with him and even hurt me when we saw him on holidays after I’d moved. I remember being terrified and wondering when it would end, but it became so regular, that I had just gotten used to it.

My mum and father have been to court around 10 times now. Not once has my mum taken him to court, it’s always him. She has been harassed by him for years and he takes her to court every time they don’t agree, or if he doesn’t get what he wants. I’ve been brought into it a couple of times. The first time was when I had to fill out an F9 form, describing exactly why I didn’t want to see my father anymore. It was difficult to describe why you don’t like the man that’s meant to be your father on a piece of paper. The form would be read out in court and my father would hear why I don’t want to see him anymore. They would then decide if I had to go and see him anymore.

I hope that no one else has this happen to them, and if it does, they know they’re not alone!

The next time I was brought into it was about a year afterwards, when I had to see a child welfare reporter. I was taken out of class to talk to her for almost 2 hours. I told her everything that happened with my father, and she dismissed it all. I assume she met with him beforehand, as she had to meet with my mum, father, me, my brother, and someone who would describe our lifestyle. Presumably, my father pretended to be the loving father that had his children devastatingly taken from him by their mother who also made them hate him, and the reporter believed him. She didn’t believe any of my family. She told the court that my father didn’t deserve to have his kids taken away from him. I felt ignored and I was worried I might not have any power over what happened to me.

Because the welfare reporter had now completely ruined the chance of me finally not having anything to do with him [my father], I had to go and speak to the sheriff of the court. I prepared so much for this, and thankfully, the sheriff saw my side of the story. I was so pleased with this because the court had finally heard what I wanted them to hear.

Right now, I’m meant to have a phone call with my father once a week. My brother tells him every week I don’t want to. I wish my brother could see that what happened to us was not okay, but right now I’m glad that I got to stay with my mum, and I don’t have to see my father. I wish that the process to get to where I am now happened quicker, and with less disappointment and hassle, but I’m glad that I can use it to help other people. I like the idea of my story being used to help others, so they won’t have to be in the same situation as me.  I hope that no one else has this happen to them, and if it does, they know they’re not alone!

I think it is really important that politicians speak to children and young people who have gone through the same kind of situations as me. It helps them get a proper understanding of what it’s like, how it feels to be involved in court so much. I think if other young people read my story they could learn that they can speak out if they are not in control. Their future is being decided for them, and I think if they are capable of making decisions they should be allowed to. As much as adults can help, in a lot of ways it can put the child in a worse situation. So children and young people should get to speak to the people they think are best able to listen. When I spoke with the sheriff I felt like he finally listened to me. it essentially took three tries to get what I wanted, and was so much hassle. I wish that speaking to the sheriff was the first thing I had done, not the last. 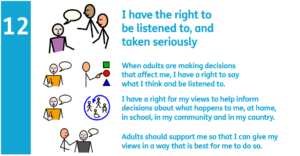 One of my biggest hopes is that child welfare reporters become unbiased, like they are supposed to be. I am sure I was just unlucky, but the fact it could have ruined my whole childhood is bad. If she had been the only person I ever spoke to, I wouldn’t be where I am today. I have achieved so much living where I am, I wouldn’t have achieved anything like that if I had lived with my father.

Watch You are not alone!, a video designed by Yello!, young people advising the IJCC project, for young people affected by domestic violence (youtube link)

Watch If home is not safe!, a video designed by Yello! for children living in a home with domestic violence  (youtube link)

Children’s access to a system of complaints and redress in family law: accountability for children?