A quick summary of the first year of my PhD

In My PhD by year

After a couple of years living and working in London, in September 2017 I moved to Edinburgh to start my PhD. I swear, it started raining the moment our car crossed the Scottish border on moving day, but I’m not one to believe in bad omens and about 5 minutes later I learned that a cat called Glen lived at the house I was about to move into so that more than counteracted any rain-induced apprehension. I was really excited to get started, anyway, to explore a new city and get stuck into a new project. I’m now well into the second year of my PhD – well stuck into both city and project. In this post I’m going to give a quick overview of the first 12 months or so of my PhD – bringing me up until my first field season. I think I have just enough distance and perspective now to write about it, and I hope that this might be interesting or useful to others in the early stages of their PhD, or those thinking of starting one. So, organised roughly by theme, here is a summary of Year 1.

Fieldwork
I know I said that this post would bring us up to just before my first field season, but actually one of the first things I did after starting my PhD was to go on a short field trip and it really shaped my project in the months following, so I’m going to start by writing about that. Whilst I knew before starting postgraduate study that my supervisors and I were all keen for my project to focus on The causes and consequences of degradation in southern African woodlands, the specifics of my study remained very nonspecific for a long time. I spent much of my first year figuring out my research questions – deciding what I found interesting and where gaps in savanna socioecological knowledge existed. From discussions with one of my supervisors and other researchers in Edinburgh, I learned a bit about the Kilwa district in southeastern Tanzania, and the conservation and development NGO MCDI, who are based there. I was told about MCDI’s prescribed burning project in which they burn patches of forestland early in the dry season, to reduce the grassy fuel load, and minimise the intensity and spread of fires which come later in the year and can be much more destructive than early fires. I wanted to learn more about this kind of fire management – forms of which are practiced by communities and organisation across the world in places that burn, but the way it is done by MCDI is pretty novel in Africa – and more about how people perceive fire in Kilwa generally. So, I decided (with encouragement from my supervisor) to go on a scoping trip, and my first ever visit to Tanzania. In November 2017 I spent two weeks in Kilwa, helping (well, being helped by) some of the fantastic MCDI staff and Kilwa residents doing forest inventory, and spending some time in Ngea and Nainokwe villages to hold some pilot interviews and ask people about fire and perceptions of early burning. What I learned informed the development of my research questions and methodology. And I knew two weeks wasn’t enough time in Kilwa, so I began to plan a return visit at the end of my first year for my first full field season.

Training and teaching
Training is provided by the E3 DTP, the Institute for Academic Development and other groups at the University of Edinburgh, and in my first year there was lots going on – courses in software and data carpentry, writing, presenting, fieldwork first aid. As well as some compulsory training, I attended lectures and seminars from Masters courses to brush up on stuff I felt rusty on, following a bit of a break from academia. In second year there are fewer compulsory courses for E3 DTP students, but I continue to be a workshop nerd and attend those which sounds interesting or fun or useful. Lots of my training for my actual research (as opposed to training on how to communicate and use my research) has come from lots and lots of reading, largely during first year – of original research, methods manuals and theory books. I did a two week internship with ESPA in late 2017 / early 2018 which involved synthesising some of their projects, and this was also really helpful for building my knowledge and generating ideas. I started tutoring last year (a learning curve for both tutors and tutees, which is why I include it in this section) which was pretty scary the first time, but is something I look forward to now. Teaching can feel like a significant extra workload on top of PhD work, so it’s important not to overbook yourself (if that’s possible and you don’t have a big teaching requirement as part of your contract!), but I love discussing topics I’m interested in with passionate students, and trying to think of creative ways to run sessions with them.

Conferences and meetings
I got to go to some cool conferences during my first year – attending FLARE 2017 and ESPA 2017 – and it was a brilliant way to get up to date with current research in my field. I presented my initial research plans at our School’s Global Change Symposium, and I participated in the SEOSAW 2018 meeting, which was an awesome opportunity to work with others researching southern African woodlands and to practice some ecological field skills in the miombo woodlands of Mozambique.

Confirmation
Moving onto the second year of your PhD at the University of Edinburgh requires you to pass the confirmation process – which is a bit like a practice thesis submission and viva, except you’re submitting your proposed research rather than a completed project. I sent a written plan to a panel of my supervisors, my adviser and someone external to my project, a few days before giving a presentation and then discussing my plan in detail with the panel. Confirmation can be a tough process even though, of course, everyone on your panel supports you and is there to help you to make your project the best it can be. My panel gave me lots of feedback on my plans, and I had to go away and make some revisions – which felt necessary, but still stressful. But my project is much better for that feedback, and I feel much more confident about my research plans following input from my panel. Glad I don’t have to do it again, though.

Edinburgh
My first year PhD-ing was pretty busy (which I’m sure is not what people told me it would be before I started…), but I did also spend some time enjoying Edinburgh, exploring the city with new and old friends, running to Fringe events between library sessions and doing some science outreach which is something I had really missed from my undergraduate days. I got a bike and started exploring a bit more of Scotland on it, too. Oh and also, I did spend a decent amount of time last year planning my first field season: preparing for September 2018, when I left again for Kilwa, excited to collect some data and for my project to really begin.

***
Thanks for reading! Any PhD newbies or wannabes or anyone interested in my work, please feel free to click on my Contact page and get in touch. 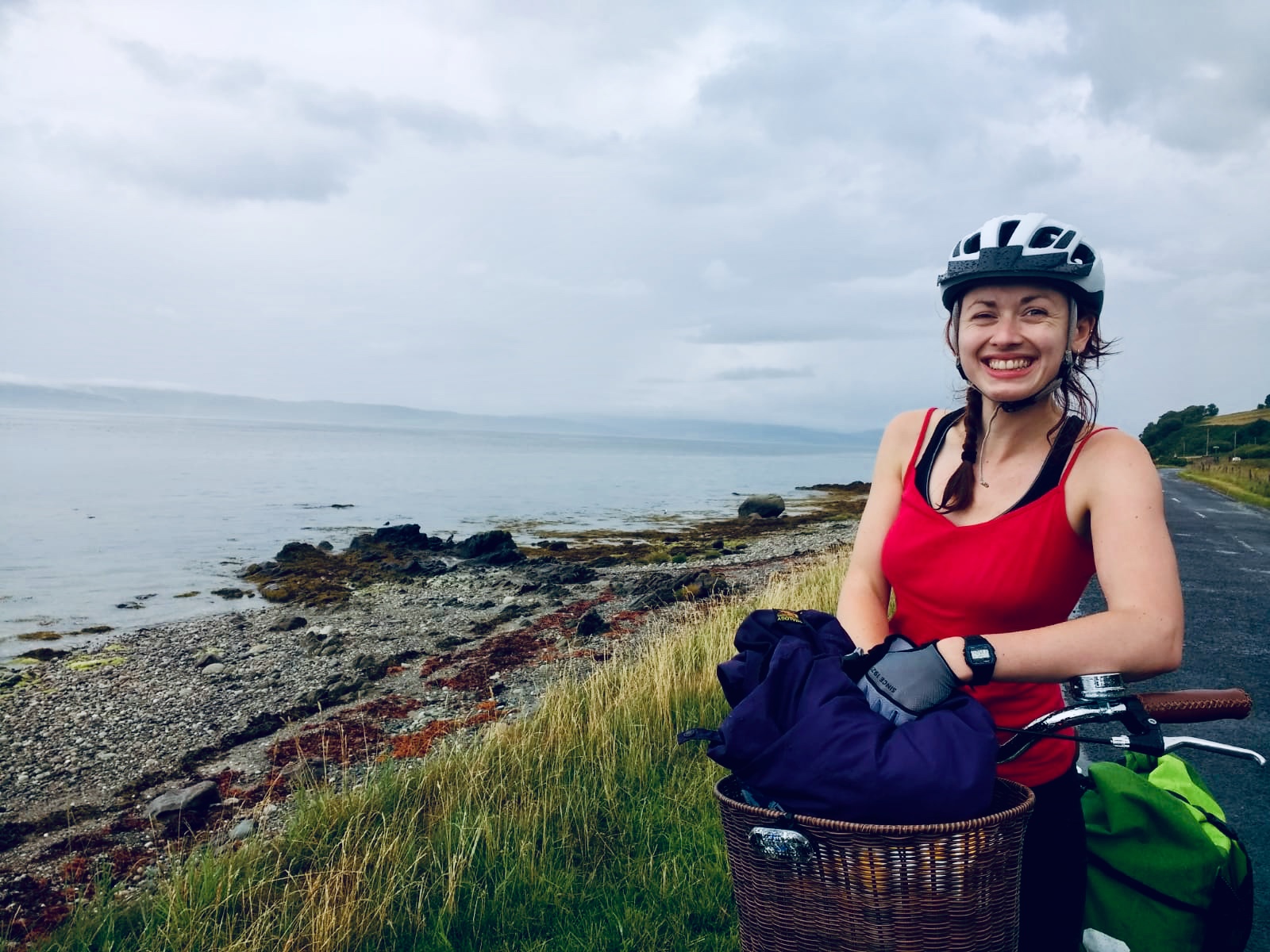 Pictures of bikes are more interesting than pictures of confirmation reports… Taken on the Isle of Arran by Sarah Feldman (2018).

A quick summary of the first year of my PhD / Ellie Wood by blogadmin is licensed under a Creative Commons Attribution CC BY 3.0
PhD life