e-cidadania, is it worth it?

Just a few days after the election of Jair Bolsonaro a couple of weeks ago, a friend sent me a link suggesting that we voted, in a poll, in favor of maintaining the current gun control legislation in Brazil. That had been a very common and divisive subject during the election cycle and will likely remain so, at least until the new leader passes the desired changes.

Some examples of Bolsonaro showing his appreciation for guns.

The link took me to a page called e-cidadania, a portal launched in 2012 by the Brazilian federal Senate to allow and incentivise citizens to take part in legislative activities, budget planning, accountability and representation. The platform consists of three tools:

Legislative ideas: citizens can suggest and support changes in legislation and the creation of laws. If a suggestion reaches 20 thousand supporters in at most 4 months, it is then discussed by the Senate.

Interactive event: users can watch and comment on events open to the public.

Public consultation: all law projects and other propositions being discussed by the Senate are described to users, who can then vote for or against them.

The main concern I have about this platform is online safety. There have been many instances of data breach worldwide, and Brazil is believed to be an easy target. Here we have a national participatory technology that requests its users to create an account with full name, password, state of residence and e-mail: all sensitive information that could be used for gaining access to other services. Looking closely at its terms of use and privacy policy, things don’t get more reassuring: the only information about personal data storage is that it is held in the Senate’s database, with no mention of expiration period. It is stated that the Senate retains the copyrights and prerogative to divulge users’ names and other input information whenever they consider it necessary for the portal’s mission.

Such is the case when a user’s legislative idea gets more than 20,000 favorable votes and is sent forward to be discussed by senators. Not only the author’s full name is divulged to the representatives and anyone who accesses the site, but also those of all people that supported it, along with their e-mails.

That may seem like fair use, but right now in Brazil, any discussion topics are clearly divided ideologically. That political divide has reached e-Cidadania: the two most voted proposition of 2018 so far suggests “criminalising MST and other social movements that occupy private lands” and “turning into a crime the teaching of gender ideology in Brazilian schools“. Those propositions (which were both supported and will be discussed by the Senate) are a reaction to what is perceived to be the greatest harms caused by leftist politics. By looking at the list of supporters names, you can identify people who are at least in part aligned with the incoming government. I wonder where are held the names of the people who voted against those values, and who can/will be able to access them: maybe a government that has promised to end any forms of activism and to eliminate opposition? 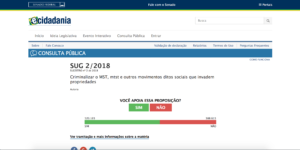 How do senators handle those results? A research by Raianne Liberal Coutinho in 2017 using data from the previous year shows that although representatives say they check the votings and take the results into consideration, they vote against popular opinion in the most relevant cases.

If e-cidadania is becoming more partisan by reflecting the current political climate, it does not seem to be overly protective of user’s personal information, doesn’t seem to influence political outcomes and could be a tool for an authoritarian government, I have to ask: is it worth participating?

My vote is no.