At the end of my fourth week I am now 1/3 of the way through my internship – what do I have to show for it? Well I’ve now found 86% of the residence locations for the accused witches out of the 821 different places listed within the database and added many of these locations to Wikidata. The witches with found locations are now ready to be added to Wikidata too and this will allow for the visualisation to begin which is exciting!

This week I have been continuing to learn about how to further narrow down my list by meeting with the National Library of Scotland for some insider tips.

Meeting at the National Library of Scotland

Over the past few weeks I have received many useful suggestions for the best resources to find these different locations mentioned in the Scottish Witchcraft Database. Now that I have a small list of places that I am struggling to locate, I had the chance to have a meeting with Chris Fleet from the National Library of Scotland. This meeting helped by giving me the extra knowledge I needed to keep cutting down my list of unfound locations.

Chris suggested that I used maps that were produced from a similar time period to when these witches were being accused from the 16th to 18th century. The best maps produced from around this time period are the Pont Maps of Scotland from 1583-1616 and Blaeu Atlas of Scotland – 1654. Both of these maps have a list created for each place name mentioned on the map and the Blaeu map even has a search bar option to make locating places even easier. An issue with these maps is that some of the place names are written in Latin making it a different spelling to the original and as these historical maps are not as accurate as modern maps, it can be difficult to find the historical place name on a modern map. These maps have been useful for finding some locations that I had struggled to find in the past. 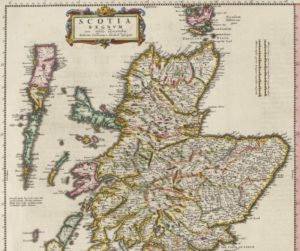 The Statistical Accounts of Scotland has been another useful source for helping locate the places of residence. This website contains historical on all of the different regions in Scotland with a search bar allowing for key words to be searched for within the documents. This resource has been useful in providing further descriptions about settlements which has helped locate them on a map.

However, my best find has been using the Georeferenced Ordnance Survey map at a smaller scale of 1:6 inch and 1:25 inch which has allowed for a much more detailed survey of Scotland. The smaller scale has allowed for very small settlements that were previously missed to then be identified on my second search of the area. The only issue with these smaller scaled maps is that they were produced from 1888-1914 which is later than the larger scaled maps and so some settlements may have been abandoned over this period.

Using these extra techniques and simply revisiting the location has been useful for further narrowing down of the list of unfound places. There is however, still 70 places which are yet to be located and another 40 that I am unsure on. I feel as if I have exhausted all resources and the next step is to ask for help from people with a great local knowledge being the most useful. I plan to email different people over the next week and see if there is anyone that can help with the location finding process.

Aside from the accused witches’ location finding. I had a tutorial in how to use OpenRefine. This is a program that I had not heard of before this internship but it is useful for organising spreadsheets. OpenRefine is also extremely useful for organising data to then be uploaded onto Wikidata and so I have been wanting to learn how to use it to make my Wikidata life easier.

I plan to use OpenRefine when working with my spreadsheet with the location of the accused witches’ residence. Once I have a chance to practice what I learnt on the tutorial then I hope to produce some videos to teach other people how to use this program.

It has been a good week for continuing to work through the list of unfound places and I hope that I can continue to narrow down the list in up and coming weeks. 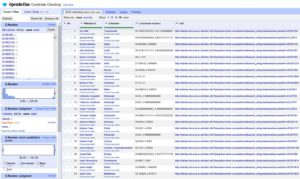 Week 4 – The Secrets of Location Finding / Witchfinder General - Data Visualisation Internship by blogadmin is licensed under a Creative Commons Attribution CC BY 3.0