Join us for a service of readings, carols and music. The preacher will be The Rt Hon Lord Wallace of Tankerness QC, Moderator of the General Assembly of the Church of Scotland.

The Edinburgh University Renaissance Singers and the New College Choir will lead our singing. 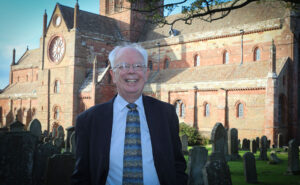 Lord Wallace, a long-standing elder began his year-long role of ambassador for the Church of Scotland in May 2021, succeeding the 2020-21 Moderator, Rt Rev Dr Martin Fair.