How we chose the music

One of the most exciting aspects of working with The Binchois Consort has always been the necessity to make a decision, to come to a conclusion, and to present something complete and coherent to the public in concert or CD recordings. It is a challenge – do doubt – but one that can be refreshing for someone used to working in a world of scholarly caution. To varying degrees, the same challenges are present here in this project: how can we present something which is engaging, exciting, and yet still founded in the historical record?

For Linlithgow Palace (for more on our choice of venues, see here) the problem is particularly intense. We are seeking to reproduce the acoustic and visual environment at the turn of the 16th century. This means that we are focusing on the Scottish sacred repertoire of the fifteenth century for our core repertory. Fifteenth-century repertory is, of course, varied and exciting. Those of you who enjoy Early Music may be wetting your lips at the thought of Dunstaple, Frye, Du Fay, Binchois… some of the biggest names in Early Music and all from this period. But none of them are Scottish. If you are struggling to name their Scottish contemporaries, don’t be embarrassed. I am too. Indeed, almost all that survives of Scottish polyphony from this period can be found on a slate dug up in a drain in Paisley abbey. Twenty notes. One voice. No text. Hardly an inspiring selection of music around which to build a VR experience. And yet, we know that music took place frequently in the chapel at Linlithgow palace, provided by members of the Chapel Royal.

For our reconstruction, we initially based our musical choices around a known historical event. In Easter of 1512, James IV stayed in Linlithgow. It was here that his son, later James V, was born. James IV celebrated Mass on Easter Sunday in the chapel and, following this, James V was baptised in the same place. Thankfully, we know what liturgy Scotland followed in this period. Like much of England, it was based on the Sarum Rite, though the sources of the chant themselves were often imported from France rather than South of the border. Whilst this was later replaced by the Aberdeen Rite (itself almost indistinguishable from Sarum), it was followed exactly during the period we seek to reproduce. This means that we know exactly what chant James IV would have heard during Easter Sunday in 1512. Of course, Easter Sunday is an important event, and royalty are used to the finer things in life. It is very probable that much of the Mass would have been adorned with magnificent polyphony, which is now sadly lost to us. Our approach to this issue has been two-fold. Rather than add obviously incorrect polyphony we have instead chosen to omit the sections, such as the Kyrie, where this would have been heard. What we present instead are some of the sections that would, in all probability, have remained as chant. We have also used a practice known as ‘fauxbourdon’, as described by the ‘Scottish anonymous’, to create a form of quasi-improvised polyphonic scaffold around some of the chant. We know this practice took place in Scotland and was a way of elaborating chant, without the need for specifically composed polyphony. This is presumably the approach that would have been taken by someone finding themselves in our position in fifteenth-century Scotland!

We wanted to give some indication, though, of how the chapel would sound adorned with the kind of magnificent polyphony that must have taken place there. For this, we turned to the Carver Choirbook. This source was owned by the very same singers that we know came to Linlithgow palace chapel to sing, and it clearly contains, within its oldest sections, some music from the turn of the century. Its most famous passages come from the pen of Robert Carver, but these are largely too new for our purposes. Nonetheless, within its older sections we are presented, for instance, with a collection of music that probably made its way to Scotland with Margaret Tudor as she travelled for her wedding in 1503. It is all English, with many concordances with the Eton Choirbook. Our attention was drawn to a section that must be older still, however, and particularly two anonymous Mass cycles that must come from the 1460s-1470s. These have been accorded English provenance, but they clearly formed part of the Scottish Chapel Royal’s repertory. For our recording, we chose the Sine nomine Mass with troped Kyrie ‘Ave Rex Virginum’, which would have been appropriate for any Marian celebration in Linlithgow. Having got to know the piece better, I am now increasingly of the opinion that this work is not English after all and that it, and its twin preserved alongside it, are instead Scottish in origin. This would make them the earliest Mass cycles in Scotland by some 50 years and increase the Scottish repertoire of this period by several thousand percent. The evidence for this deserves its own special consideration and I won’t go into it further here, but watch this space!

The music for Linlithgow palace was recorded, in our anechoic chamber, by our friends The Binchois Consort. We made a valiant attempt to reproduce the pronunciation of fifteenth-century Scottish Latin for our recording. See below for a photo of the consort in the interrogation anechoic chamber. 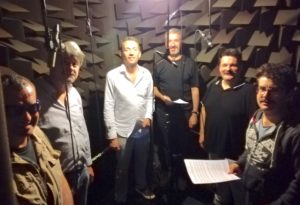 St Cecilia’s Hall is, to an extent, a somewhat easier prospect. The Edinburgh Musical Society, who built the hall and ran its concert series, very kindly preserved records of the concerts and repertoire. We have taken the conceit of reproducing a typical first act of one of their concerts. These began with a periodical overture and were followed by a couple of songs by visiting singers. Whilst we have a list of the periodical overtures in use by the society at the period, the songs were chosen by the visiting singers and we have less idea of what these may have been. We have chosen, from their plan books, the periodical overture XIII by Lord Kellie. This piece was performed more times than any other periodical overture in the decade in which we are situating our reconstruction and it was composed by the lead violinist of the orchestra during this period. Following the overture, we asked Dr Jenny Nex, who is also the curator of St Cecilia’s, to sing two songs for us accompanied by Dr John Kitchen on Harpsichord. She chose to sing Johann Christian Bach’s, Blest with thee my Soul’s Dear Treasure which was published in Edinburgh shortly after the period we are reconstructing, noting on its first page ‘Sung by Mrs Stuart in St Cecilia’s Hall’ and ‘The Lass of Peaty’s Mill’, from The Scots Musical Museum, since Scots songs were also popular material in the hall at the time.

We recorded each of these pieces with attention to historically informed performance practice, using historical pitch, approaches to ornamentation, and instruments. The effect is quite striking, and particularly effective within our reconstruction of the acoustics of the time.

How we chose the music / Space, Place, Sound and Memory by blogadmin is licensed under a Creative Commons Attribution CC BY 3.0
early musicmusicScottish heritagevirtual reality

Welcome to the Space, Place, Sound and Memory blog!

One dashing white sergeant, add a derailment, malt whisky and an abundance of Inspiration – our time at the HES’s DigiDoc 2018