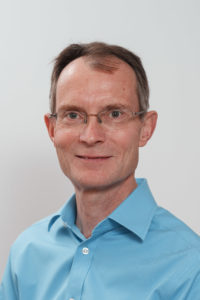 At the beginning of 2019 the Brain Research Imaging Centre (BRIC: also known as Edinburgh Imaging Facility WGH) celebrated its 21st year of  neuroimaging research in brain health and common brain diseases. In summer 2019, with the Department of Clinical Neurosciences relocating from the Western General Hospital to Edinburgh BioQuarter, so too will the staff of BRIC.

In a big year for BRIC we invited Ian Marshall to share with us his memories of working in imaging at the Western General Hospital.

Ian is Professor of Magnetic Resonance Physics and first started working with Clinical Neurosciences in 1992 before moving across to a University senior lectureship in 1996.

When the first NHS MRI scanner was installed in Clinical Neurosciences at the Western General Hospital in 1992, my head of department at the time (Prof Norman McDicken) suggested that I should “go down there, see what it’s all about, and assist them”. And so began a long association.

In those early days, I acted as the MR expert, advising on the scanning and data analysis, and teaching the basics to trainee radiologists. I also laid down some of the research themes that have continued ever since.

The new scanner soon became busy with clinical imaging, and physics development work had to be done out of hours. I remember coming in early on numerous occasions to carry out flow studies involving buckets of water, hosepipes and electric pumps, working alone in the scanner room before the radiographers came to work. It wouldn’t be allowed nowadays! 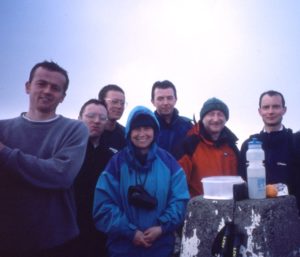 When Joanna Wardlaw returned from a consultant neuroradiology post in Glasgow in 1994, she initiated a bid for a dedicated research MRI scanner to be housed adjacent to the NHS facility. Eventually, major funding was awarded by SHEFC (now the Scottish Funding Council, SFC), the Medical Research Council and scanner manufacturer Elscint.

Additional funding was raised from charities, individuals, and through events including several balls, the Edinburgh Science Festival and a sponsored fun run in Holyrood Park. A personal highlight for me was a 3 Peaks Challenge, in which a determined group of us climbed Snowdon, Scafell Pike and Ben Nevis within 24 hours. 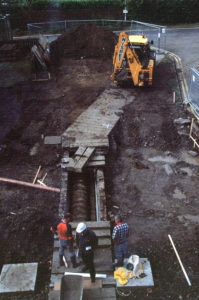 Work began on constructing the facility in autumn 1997. It didn’t help that the main steam pipe for the WGH runs directly under the building and there was concern that the scanner’s magnetic field would be affected.

Compensating iron plates were included in the building and, thankfully, everything turned out well with the scanner beginning operation in March 1998. 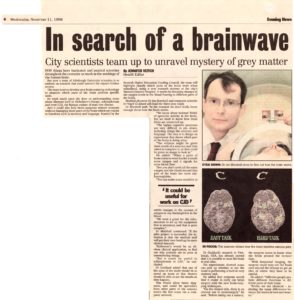 Journalists visited in November, and my mugshot featured in an article in the Edinburgh Evening News. An early highlight was our first ever functional imaging (fMRI) study in December 1998, in which a volunteer moved the fingers of one hand or the other during continuous brain imaging. Activation of the contralateral motor cortex regions could be seen in the processed images. This was the first of a series of pilot fMRI projects involving informatics and psychology.

The scanner itself was to be short-lived. Following Elscint’s takeover by General Electric (GE), it was replaced by a mainstream GE Signa model in December 1999. The completed facility was officially opened as the Scottish Brain Imaging Research Centre (SBIRC) in May 2000. 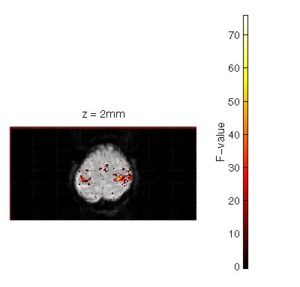 With two subsequent upgrades, the scanner has continued to give good service up to the present day, having completed almost 30,000 scans. Along the way, SBIRC became the more pronounceable BRIC. High-impact research output has led to Edinburgh becoming world-leading in understanding the causes of cerebrovascular disease, stroke and dementia, and underpins international guidelines on imaging in stroke.

A bright imaging future
The facility is now part of Edinburgh Imaging, a consortium that hosts multiple scanners for research imaging studies and has more than 100 affiliated staff. This represents a fantastic resource for the future, and it all began with BRIC.

The end of an era and new beginnings for BRIC / SCOPE by blogadmin is licensed under a Creative Commons Attribution CC BY 3.0