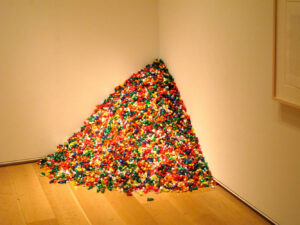 Continuing from my previous work, I decided to do some artist research that links in with my chosen theme of litter and pollution. Felix Gonzalez-Torres was a Cuban-born American visual artist, who was known for his minimal installations and sculptures in which he used a range if materials, including string of lightbulbs, clocks, and my area of interest, hard candies. Torres’s ‘Untitled (Portrait of Ross in LA)’ uses candies in colourful wrappers to create a simplistic and aesthetically pleasing sculpture.

This was an interactive sculpture, as the viewers were encouraged to take the hard candies and eventually replenish the taken piece. This concept represented Torres’s late lover and his eternal love for him. Although this piece has a heart-felt meaning behind it, I am focusing more on the appearance of the piece, and the overflowing effect of the pile of candies. I would like to further explore this concept and incorporate it into my own work, utilising the idea of litter overflowing and being in excess. 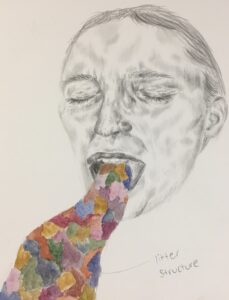 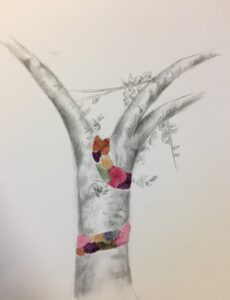 Here are some initial ideas I have come up with, represented by some pencil sketches. I would possibly like to create a sculpture out of plastic bottles concealed with litter and packets, and situate it in different areas in order to represent the excessive overflow of litter we have today. By wrapping the structure around a natural form, or even having it overflow from someone’s mouth, I feel like it would be a clear representation of pollution and how change is needed. 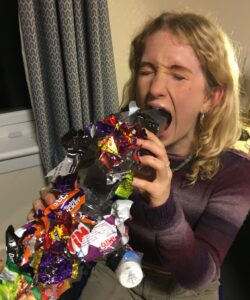 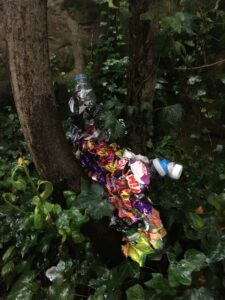 Here I got my friend to pose with the sculpture, and I intended for it to look like it was protruding from her mouth in an overflowing way, in order to represent the excessive amount of waste we have. I then decided to try and incorporate it within nature, and the contrast between the natural and man-made materials creates a stark look.

Working with the Found Object- developing ideas and outcomes / Florence White / Drawn From the City (2021-2022)[SEM1] by blogadmin is licensed under a Creative Commons Attribution CC BY 3.0