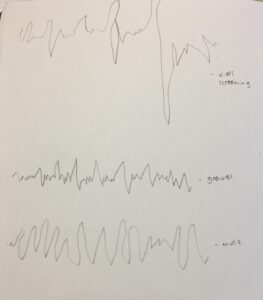 To the left are some initial ideas to base a resolved piece of work on, relating to sounds I have collected over this project. I recorded each of these sounds using the voice memo app, and sketched the sound waves that these noises created. I want to incorporate these within my work, to actually have the shapes of the sound included within the piece. 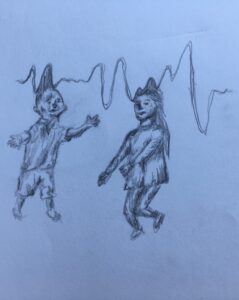 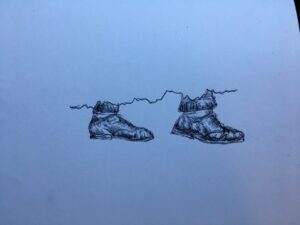 Above are a couple of ideas for a painting I would like to produce, with the concept of combining the visual source of a sound and the actual sound wave. I like the idea of the objects protruding from the wave/emerging from it, and I would like to play around more with this concept. The combination for me portrays the importance of sound in art and how it brings it to life. To progress the idea even further, if the piece was placed on display, I could add an interactive aspect and have the actual sound that was produced linked to that section of the painting. 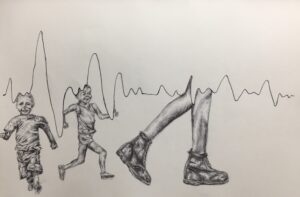 This is an outcome I produced using biro, including some sound waves of my own recordings I took in the city. I tried to incorporate both the physical and sound, by sketching what I imagine the source of the sound looked like. I am pleased with the result, as I feel the objects protruding from the sound was is effective, and indicates how important sound is in bringing an image to life.

Mapping the Soundscape- Sketching Ideas and Outcome / Florence White / Drawn From the City (2021-2022)[SEM1] by blogadmin is licensed under a Creative Commons Attribution CC BY 3.0