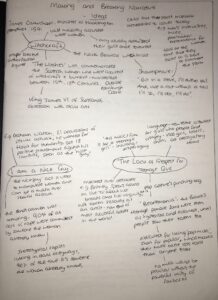 For this project I had a few different initial thoughts, mainly surrounding misogynistic views during different time periods. I considered focusing on the idea of the stereotypical ‘nice guy’ in today’s society, however 90% of all acts of rape were committed by someone the person already knew, which suggests there is no such thing as an innocent ‘nice guy’. I then questioned whether to go down the route of how teenage girls today are constantly ridiculed for their hobbies or interests, which is evident through social media, language or just everyday conversations you overhear in the street. However, the topic area which I have decided to focus on is the persecution of witches between the 15th to 18th centuries, and how men in power managed to convince others that the torture of innocent women was justified, and perhaps links or similarities in modern society today. The vast majority of people who were accused were women, and they usually admitted to their guilt once tortured. I would like to question further why women were mainly targeted, and also why they were feared so much. 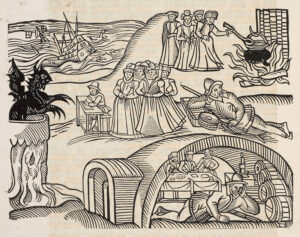 How were women accused and identified as witches?

Before the Middle Ages, magic was mainly associated with the male gender, however women started to experiment more with natural remedies, healing themselves and others. Eventually, hysteria about witches began to set in. Mainly older widowed women were accused of witchcraft, as there was no male to protect them, and the Church exaggerated the look to create the typical Halloween look of witches and would conflate anyone who practiced natural healing and those who worshipped Satan. It was thought that the women performing the ‘magic’ would not understand and could easily be controlled by the devil. There were around 45,000 deaths of ‘witches’ between the 15th-18th centuries.

Why were witches feared so much?

‘The Malleus Maleficarum’ or the hammer of witches is the best known treatise on witchcraft. Written by catholic clergyman Heinrich Kramer, he included how to identify witches, and believed they met with the devil at night-time sabbaths, killed children and made men impotent.

Why were women more likely to be accused?

As described in ‘The Malleus Maleficarum’, a stereotype of women’s temperaments was created, and it portrayed women as being ‘chiefly addicted to evil superstitions’, and went on to blame their greed, credulous nature, feeble mind and body, slippery tongue and jealous nature. Furthermore, the Church had a long standing prejudice against women. Religious authorities were obsessed with sex, however their repressive ideologies wouldn’t allow that, therefore if a woman (sexually evil beasts) were responsible for a priest’s sexual desires, he could still feel righteous and holy. Many of the torture  methods used were targeted towards women, for example red hot tongs were put to breasts, iron chairs with nails were utilised, or the sink or float method, which included women being bound up and submerged in water, as it was believed witches would reject the water and float, which lead to many deaths by drowning.

How does this affect life today? Are there any links/similarities in current life? 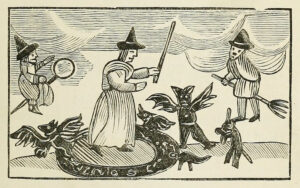 Today, witches are associated with big green noses, green skin and a black hat, however many women are trying to re-appropriate the label of a ‘witch’ as a significant symbol of power. In some areas of Asia, Africa and the South Pacific, people believed to be witches are still persecuted and attacked under the suspicion of witchcraft. The history of witchcraft is intrinsically tied with women’s histories and stories, and allows us to uncover supressed voices and reveal modern day stereotypes. The suppression of women due to natural healing methods has consequences today. The medical field became a male dominated profession, as women’s natural healing was dismissed by trained males who went to universities, which has lead to the dismissal of women’s work as healers within midwifery or nursing. 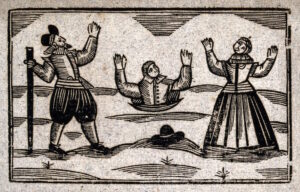 There were many historical artworks portraying witches, and a popular method was making pamphlets through woodcutting and printing onto paper. There was a hunger for tales of scandal and sex, and witches were used to fulfil this desire. All of the images I have used are from a pamphlet called ‘Newes from Scotland’ in 1591. To the left you can see a woman being exposed to the sink or float method in the North Berwick witch trials, proposed by King Jams VI. He believed witches tried to sabotage him with a storm when he was travelling to Denmark, therefore he tortured around 70 to 200 women in the North Berwick town alone. These trials were included in Shakespeare’s Macbeth, when he writes ‘But in a sieve, I’ll thither sail And, like a rat without a tail I’ll so, I’ll do, I’ll do’. The witches were believed to have sailed in a sieve to sabotage King James.

To continue this project, I would like to create my own artwork in the style of the pamphlets created from the North Berwick witch trials, however I would like to convey the evil truths of the torturing through my work, instead of the witches being portrayed as evil villains.

Making and Breaking Narrative- Research / Florence White / Drawn From the City (2021-2022)[SEM1] by blogadmin is licensed under a Creative Commons Attribution CC BY 3.0