Despite the COVID-19 pandemic, it’s outbreak and its consequences, our life goes on and we keep on moving.

Hence, I decided to title my portfolio as Ob-La-Di/Ob-La-Da. I’ve been a fan of the band The Beatles since when I was eight, Ob-La-Di/Ob-La-Da has been one of their songs which has made me feel optimistic about my future.

‘Ob la di, ob la da‘ was a phrase McCartney had heard from a friend called Jimmy Anonmuogharan Scott Emuakpor (known as Jimmy Scott), whom he met in the Bag O’Nails club in Soho, London. The title was said to be Urhobo for ‘Life goes on’. [source- google]

I decided to make a sound clip on audacity which portrays the fact that slowly and steadily we’re returning back to the normal we used to live in the post-covid era.

In my first audio clip, I had created a twenty-four-second clip which recorded the “sounds of lockdown”. The only sounds which the listeners could hear were of an ambulance siren, chirping of birds & strings of a guitar.

In the audio mix which I have created, I heard many different sounds. Since we can now step out of our house, but with precautions, we can now hear the sound of traffic, horns, tractors, footsteps, up-beat music etc, which emphasises on the fact that our life goes on. 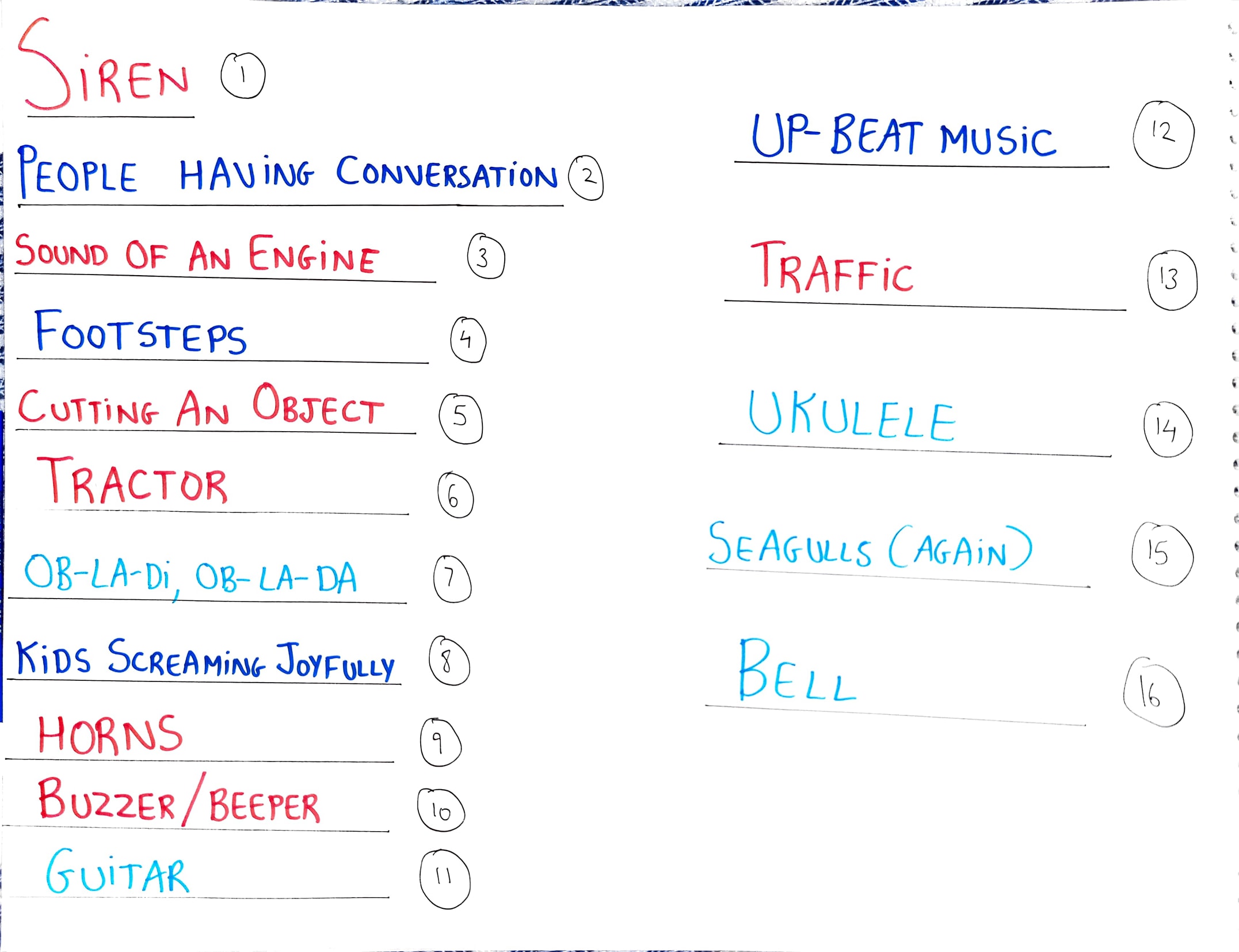 A list of sounds I heard in the audio clip.

I had also created a sound chart, where I listed down the sounds I heard in the audio clip “returning to normalcy” and connected them with different colour sketch pen in regard to the mood they had put me in. 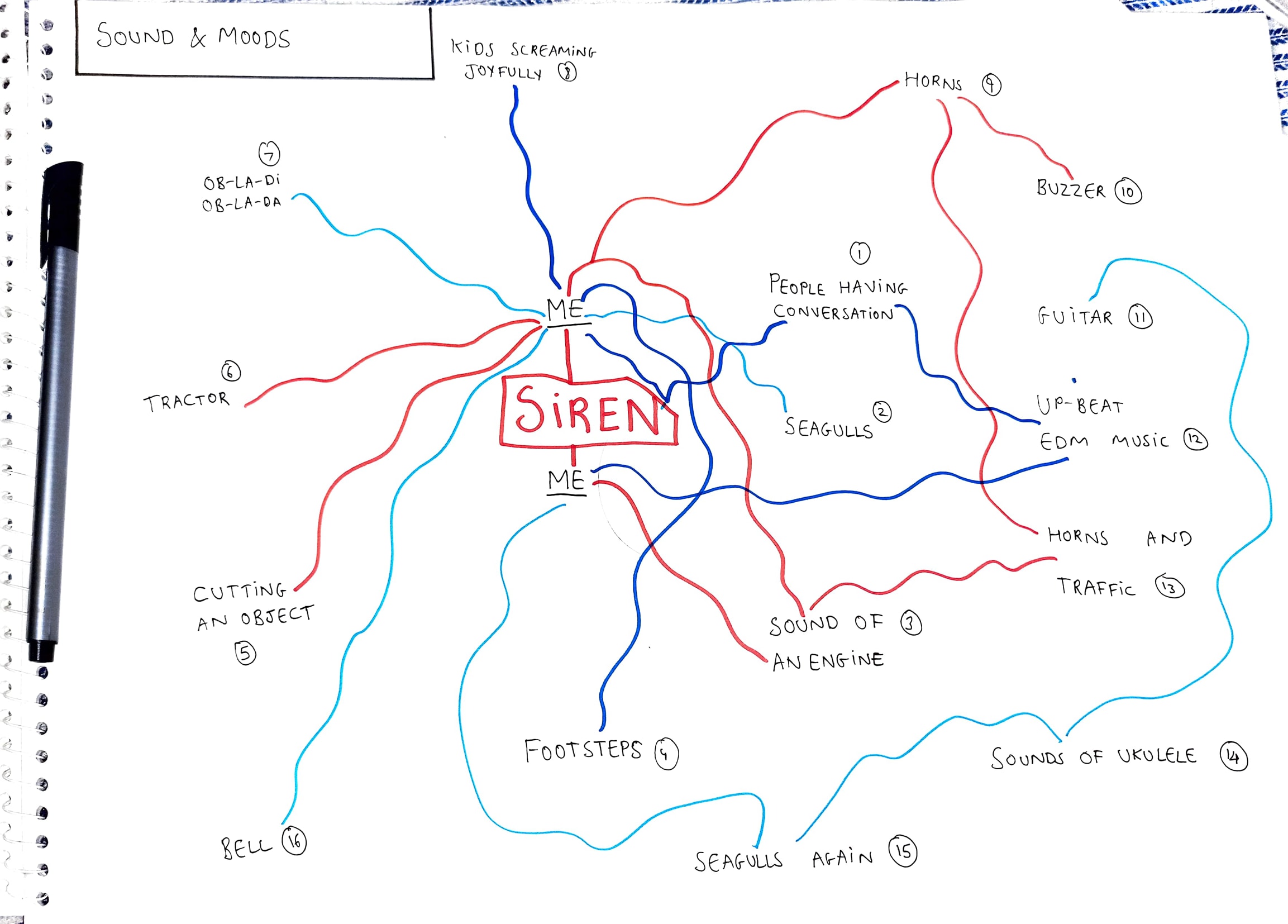 Sound Chart x Moods. Red for unsettling noises, dark blue for natural or neutral moods and cyan for voices which gave me a sense of tranquillity.

To emphasise on the fact further that slowly and steadily we are returning back to normal, I decided to make a short video clip in form of frame animation created on a sketchbook, and I added the name of every different sound I heard on the page of my sketchbook.

There is the constant sound of the ambulance siren in the video which portrays the rise in COVID cases, though the sound of the ambulance is not as dominant as it was in the audio clip “sounds of lockdown”, people do not live in a state of fear, rather they’ve taken precautions and measures to fight this pandemic and return to their normal routine.

The several noises in the video clip depict that now people are free to get back to their schedule, which has been emphasised by putting different loud and overlapping noises portraying the “busyness of life”.

The sound of seagulls and ukulele make me feel sanguine. In the last ten seconds of the clip, the sound of the ambulance disappears and the sounds of seagulls and ukulele are most dominant in the clip, highlighting the fact that things might have not recovered fully, but they’ve surely become better, giving us the message of “that this too shall pass”

Mapping the Soundscape- Portfolio/ Ob-La-Di, Ob-La-Da / Moh Mandhyan / Drawn From the City (2020-2021)[SEM1] by blogadmin is licensed under a Creative Commons Attribution CC BY 3.0