Report on an Anthropologist: Eduardo Kohn

Eduardo Kohn is Associate Professor of Anthropology at McGill University. He has spent twenty-five years carrying out anthropological research with Amazonian people who live in one of the most biologically diverse ecosystems on this planet.

Kohn focuses his attention on an “emerging understanding of semiosis” (Kohn 2007:3) where sign processes are not exclusive to humans, therefore he proposes “a kind of anthropology that is not confined to the human” (Kohn 2007:4). During his fieldwork with the Runa people in Ecauador, Kohn discovered that they believe it is possible to know the “dreams, intentions and motivations of dogs” because dogs engage with the world and each other as selves and are therefore beings with a point of view (Kohn 2007:4).

The incident recounted in the article tells how Kohn’s host family’s three dogs were killed in the forest by a jaguar. His host’s wife marvels at the fact that the dogs had not predicted their death. The people of Runa, in fact, observe their dogs while they are asleep and the way they behave in their sleep gives clear signals of what will happen the next day. For example, if they bark in their sleep, it means that they are chasing animals and this is what they would do the next day. However, if the dogs cry in their sleep, this is a clear warning that they will be in danger the following day. The family dogs had not dreamed the night before they were killed by and the family are unable to explain why they had not foreseen their fate.

Kohn suggests expanding the boundaries of ethnography and he proposes an anthropology of life that is more inclusive of other living beings (Kohn 2007:5-6). He says we need to go beyond “the loop that traps humans as analytical objects within a framework of analysis that is exclusively human” (Kohn 2007:18).

Kohn’s How Forests Think won the 2014 Gregory Bateson Award for Best Book in Anthropology. Kohn is influenced by Charles Peirce’s three-dimensional system of the theory of signs because “icons and indexes are the signs that nonhuman organisms use to represent the world and communicate between life forms” (Descola 2014:269). An anthropology which goes “beyond the human” is therefore provided for within a broader interpretation of semiosis (Descola 2014:269). Although Descola appreciates Kohn’s “beautifully written” work and the “remarkable” combination of theory and ethnography (Descola 2014:269), he points out that the title of the book refers to ‘forests’ but Kohn  limits his analysis to the Amazon (Descola 2014:270).

Kohn explains the interesting concept of ‘sylvan thinking’ on YouTube. This basically consists of a new domain of thought where we observe other forms of communication. He points out that the forest is inhabited by people, animals, plants and spirits and these entities think too: thought is not exclusive to humans. Kohn says that once we “reground symbolic thinking” (YouTube), this can help us live in a way that we are less disjointed from the effects we have in the world.

Dr Laura Jeffery is a Professor of the Anthropology of Migration and her research interests include participatory arts methods and creative engagement with migration and displacement, as well as intangible cultural heritage and human-environment relations in protracted displacement contexts. Much of her research regards Indian Ocean islands (particularly Chagos, Mauritius, Seychelles and Maldives).

This article introduces an arts-based method of approaching migration. Contributions recount personal stories through various forms of art, such as poetry, photography and painting. As stated in the article, this approach allows researchers “to capture aesthetic, emotional, sensory, and tacit experiences that cannot easily be expressed in words” (Gauntlett 2007; Eisner 2008; Bagnoli 2009; Ball and Gilligan 2010). It gives migrants a chance to tell their stories from their point of view and it is basically ‘a research with rather than about migrants.’  The first question I asked Dr Jeffery was about her favourite entry in the collection. She replied that some of her favourite contributions were undoubtedly some of the poetic works, as they gave both researchers and migrants a way to analyse and articulate the message they were trying to deliver.

I then asked Dr Jeffery about the recommended length of stay for fieldwork. Having spent 15 months in the Mauritius Islands from 2002-2004, she emphasized the importance for an anthropologist to see every season of a place, therefore spending at least a year living among the population is fundamental. It was interesting to learn that that Dr Jeffery  speaks to the local people in these islands in a French-based language. Unfortunately, recent travel restrictions have temporarily halted foreign fieldwork. 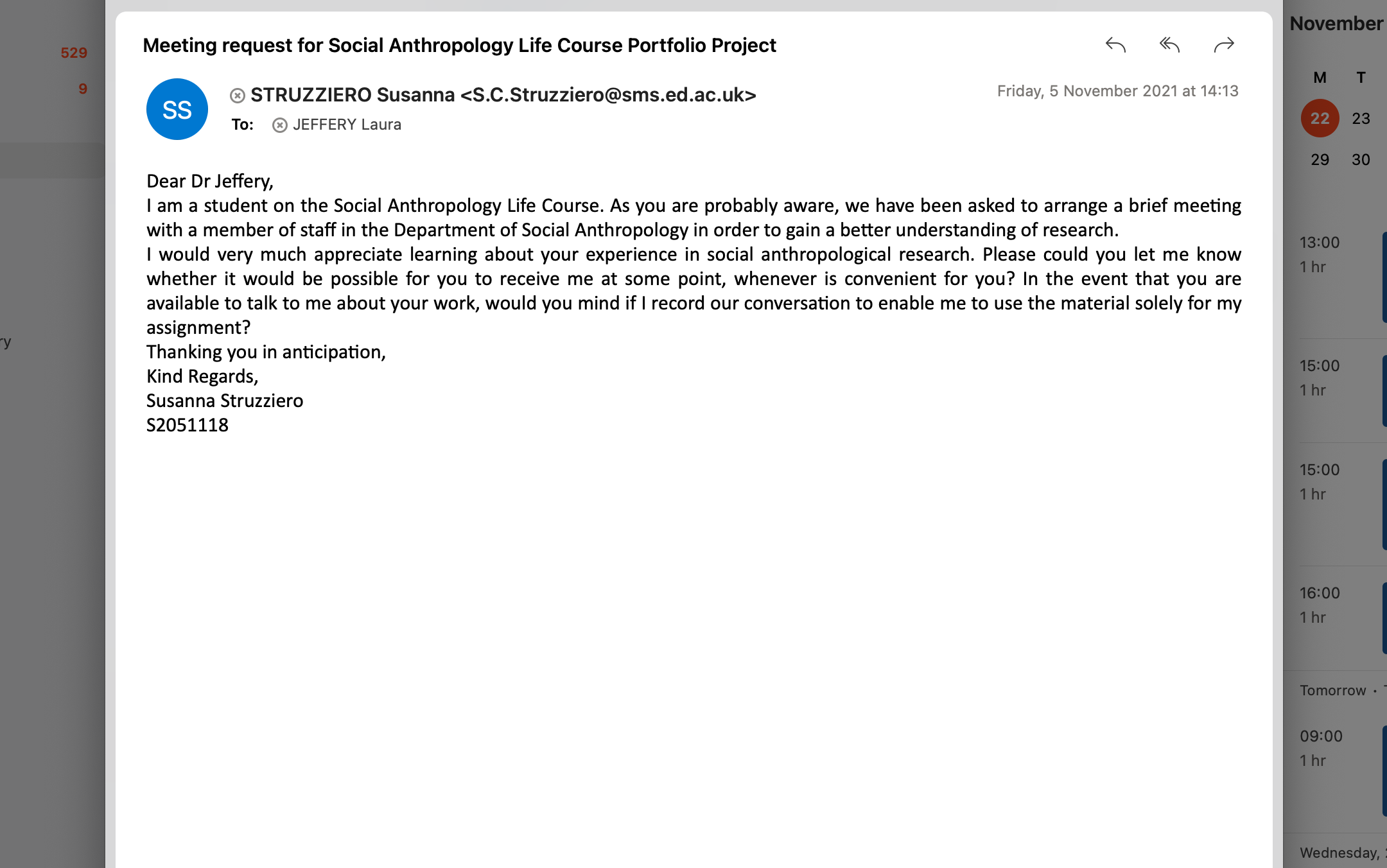 The peer-marking exercise was unexpectedly helpful and rewarding. I received positive and constructive criticism of my written work. The student who checked my texts gave very mature and balanced feedback. I received both praise for expressing ideas clearly as well as some interesting observations and suggestions on how I could modify some sentences in order to convey my ideas more effectively. It was also recommended that I could link some of my comments to the course readings and to add some details about my own culture. I tried to follow the advice given as much as possible and I made some changes to my original text.

Initially, I felt slightly uneasy about commenting on somebody else’s work, but as I gradually read through the texts, I realized that I was able to make some hopefully useful suggestions. In particular, I felt I could give some tips regarding spelling, punctuation and the importance of  following a consistent referencing style.

All in all, I found this experience to be beneficial to everybody and it was reassuring to discover that most students face the same difficulties and make the same mistakes. I would therefore be willing to take part in similar exercises.

It had been raining on the morning of Saturday 2nd October, so I wondered: what better weather to go out and explore a spooky place? I immediately stood up from my chair, closed my books and grabbed my raincoat. I sprinted outside and smelled the oddly soothing and autumn-like odour of wet concrete and soil enter my lungs. The Meadows was deserted because of the rain, so I remembered that nearby, there’s a Salvation Army charity shop which had put up some spooky Halloween decorations. I made my way inside and introduced myself to the cashier, explaining to him what my project consisted of. I got my pencil and notebook out and asked him if it was okay for him to give me his name. He smiled and nodded: his name was Mark. The spookiest place he could think of was Greyfriars Cemetery. He said lots of teenagers like to go there because of the atmosphere and as it’s open 24h, they can get the spooks when the sun has set. I had never been to this cemetery, so I was excited. Because of the rain, I could hear the sound of my shoes squelching on the wet pavement. It was as though I had been catapulted into a cemetery far away from the city, as it was so silent. I could smell the moist grass and my cheeks had become rosy in the cold. After taking a few pictures I decided I would return that same evening and see what it was like at night. It was then that I really got the spine-chilling spooks Mark had told me about. Young people shrieking in the distance, branches creaking and weird-looking shadows. There was even a group of tourists with oil lanterns being showed around and hearing the story behind Greyfriars Cemetery and the old Greyfriars Kirkyard prison. I was on my way out when suddenly, I felt I was being sucked into the ground. I looked behind me and saw my name engraved on a tombstone. That’s when I realised: I was one of the dead.

I decided to write in first person so that those who read it could identify themselves with the ‘protagonist’. I tried to put into words the atmosphere that surrounded me when visiting the cemetery, the sounds, and the smells of the wet ground. I think that, when writing about something scary, it is important to make sure to give off the right spooky-vibe and also adding a plot twist at the end, the kind that makes you gasp and widen your eyes. 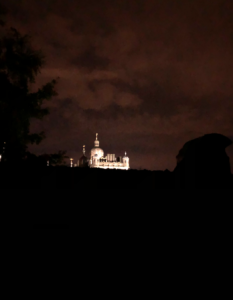 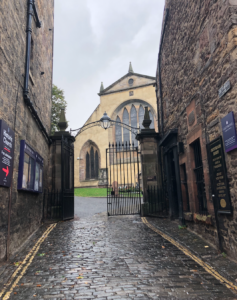 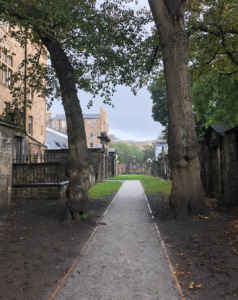 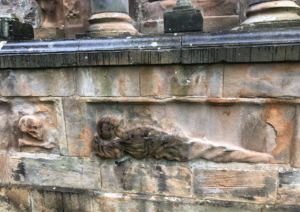 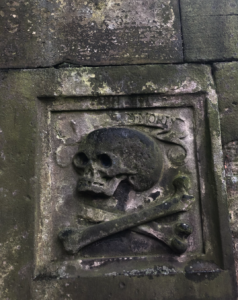