After I publihsed my blog about the Festival of creative learning chatbot workshop I bumped into the Lisa Dawson (Director of Student Systems and Administration) who asked if we could condense the 3 hour workshop into 45 mins, run it 4 times at an away day and go to the zoo (queue the gasp! or the people who roll thier eyes and say ‘that’s easy, I ran a marathon on my hands whilst milking a cow and I don’t have thumbs!’).

Initially I thought wow! this sounds great imagine all the fun and things we could learn……. at the zoo. This animal euphoria quickly turned into mild panic as I said ‘Yes’ before speaking to the bot league or even thinking about what we could do within quick turnaround sessions with attendees with no or little chatbot knowledge. Queue the dream of me running into the lion’s den smothered in bacon (sharing is caring).

So, first step was to speak to meet my fellow workshop heroes aka the bot league , preferably on a rainy day somewhere dark, mysterious and moody to discuss the proposal. Unfortunately, we didnt want to get wet and it was a Friday when we met so we were both dry and slightly giddy with the weekend hours away. The ‘bot league’ (which consists of Marcello ‘The mechanic’ Crolla, Stewart ‘The laminator’ Cromar, Joanne ‘Designzilla’ Gordon and Myles ‘The guy that looks like other bald bearded guys’ Blaney) met and deliberated over the proposal accepting the challenge with a high five (which was risk assessed).

With great power comes agenda and aims which are summaried below:

When people hear the term ‘chat bot’ they might panic and lean towards the technology and who can blame them. It’s a technology that is evolving and is mentioned in the same breath as Artificial intelligence, machine learning and big data. The washing machine of terminology on a speed cycle that bleeds into each other and before you know it your basic chat bot is time travelling biker clothes wearing robot who knocks on everyone’s door asking wehther Sarah Conor resides in the abode? This is the issue I am keen to avoid, to make technology seem realistic and plausible we need a wide buy in and understanding of its purpose and benefits (not just to end-users but to the organisation\staff\reputation etc).

So to ensure nobdy gets technophobic the workshops would be technology free and involve attendees paper prototyping conversation flows based on questions they have chosen. This alleviates the pressure on attendees to know anything to do with bots or code and allows them to simplify the process which is a thing (chatbot) trying to provide an answer to a question something has asked (accurately and efficiently). This may sound simple however if you ask 10 people the same question you will probably get 10 different replies. Some of those replies won’t be answers just more questions and that in chat bot land this can lead to poor user experience due to question structure, ambiguity and language (writing style is a thing).

The bot team created an agenda, prepared slides, built a persona (that looked a bit like the Terminator) and delegated duties. Before we knew it Friday the 25th May had come and we were off to the zoo. We ran 4 sessions with attendees split into 4 groups and each group successfully creating paper prototypes of a chat bot (which is awesome). The bot team acted as facilitators for the workshops which basically involved us talking to each group, providing some stimuli (not a lot was needed) and questioning some of the groups reasoning.

To help get the creative juices flowing we find that it helps groups design name the chat bot. Personally, I think the sense of ownership and investment increases once we have an affiliation (like a name) which can also inherit inferred or related characteristics. Group chat bot names included Bruce, Chatburgh, The Fundzone, God and George Michael (this is not a typo!) with some groups placing large emphasis on the name and the persona\tone\style of the bot and forgetting to pick a question. 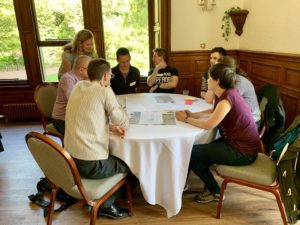 We provided a set of questions (based on common enquiries) and a wildcard option allowing the groups to create their own question whilst stressing they didn’t need to know the answer. On the day we had clear winner with a large majority of groups choosing ‘How much are the tuition fees?’.

The next step was to then design the conversation via a flow chart. This involves attendees using flip charts, post-it notes and sharpies pen to mock up a conversation flow that could either be a simple branch exercise or be more advanced and include chat bot options (e.g. buttons, carousels, images). With a 15 min deadline the groups all delved into the task with the majority quickly starting to debate the user journey, the various forms of information required, was the chat bot going to answer the question or redirect and even the personality (If you’re gonna to do it, do it right, right). 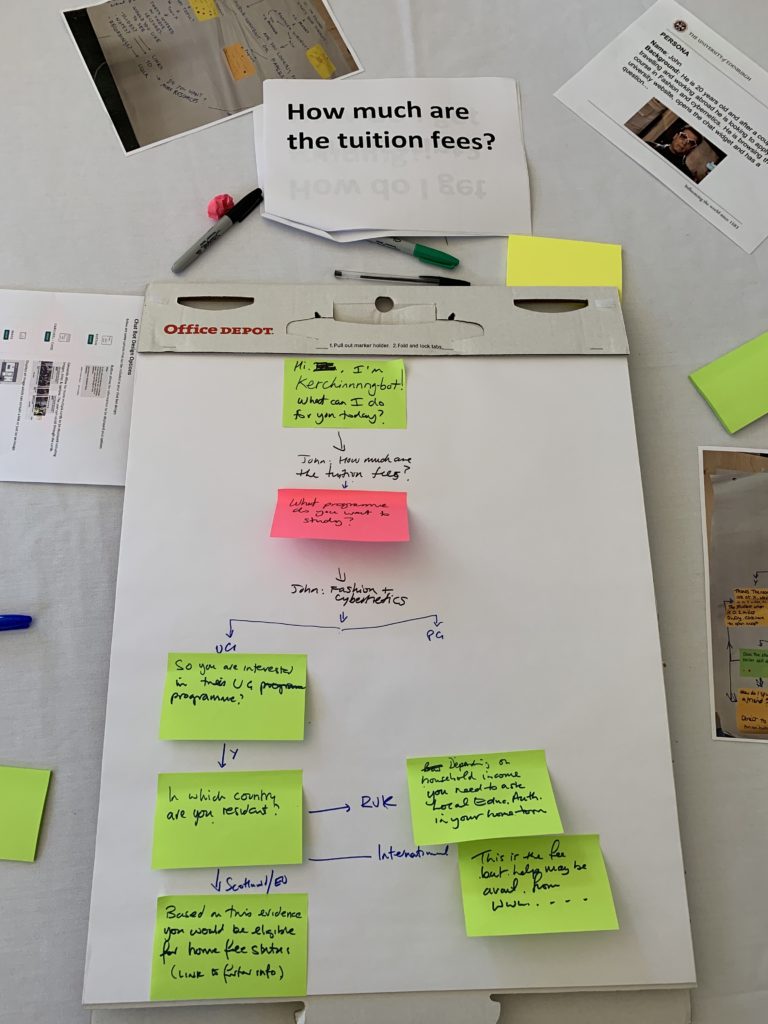 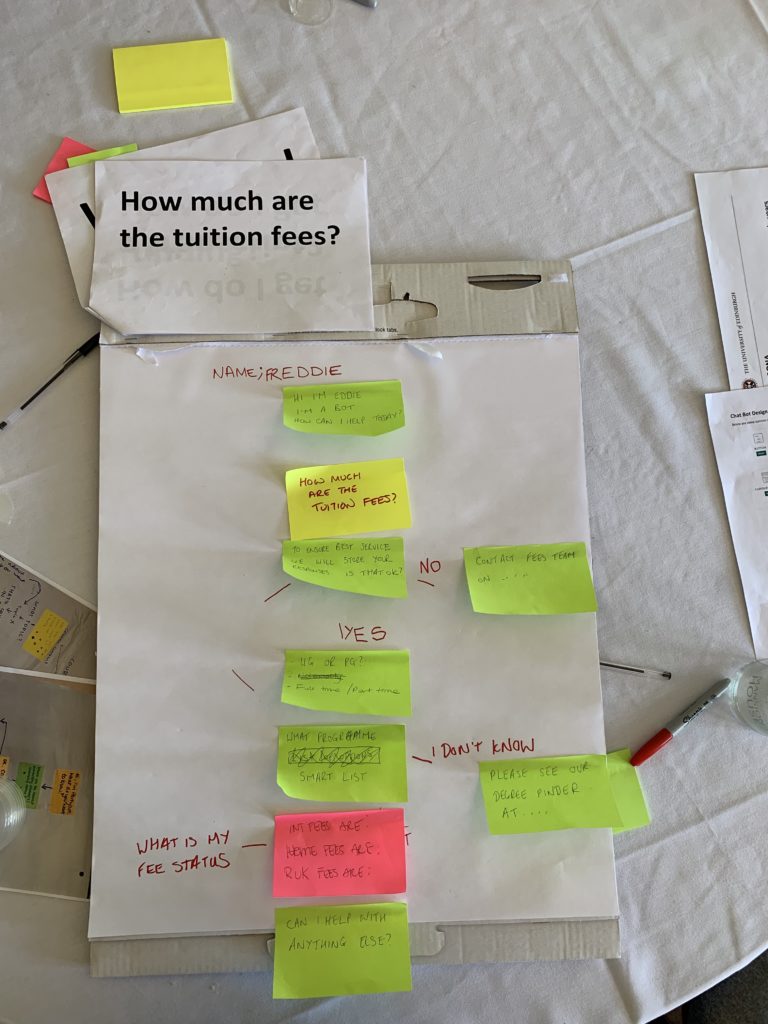 At the end of the 15mins a lucky group (or 2) discussed their chat bot and reflected on various aspects with all the groups agreeing that designing the conversation was more difficult than they thought. The above workflows provide examples of how the same question was answered differently, the first example Kerchingbot letting the user specify the course (via free text entry) and being a bit formal and bot like. The second example (Freddie) feels more customer service focused with language that is more helpful, related questions being answered or the best avenues for contact being supplied.  No design was the same throughout the day.

A bit about webpages

A lot of the designs included links to external webpages which flagged a few conversations on the content quality of those sites and whether the user experience was improved, or the original question asked was answered.  If a chat bot directed me to a web page which was rubbish is it the chat bots’ fault for directing me or the page owners’ fault for not being able to apply good design? or both?

Webpages can be funny things and the quality of them can depend on a plethora of factors but from the attendees designs we could see a separation of the design between the chatbot and the webpage. When considering linking to external links we should consider the quality of those sites. Imagine the scenario someone in your office asks, ‘where is Lady Lawson Street in Edinburgh?’ and you just point in a direction but don’t provide any instructions or check the direction your pointing is correct! Your immediate reaction would be asking for clarification, ignore the unhelpful colleague and try to figure it out yourself or walk off cursing them and tell everybody your thoughts via the Universities blogging platform (you know who you are!!!).

But the big question is why couldn’t the chat bot answer the question?

Chat bots are boring, they are applications that are pre-programmed to provide a response to a question or derive a relevant response from non-programmed text (via AI). This might seem harsh however it makes it more tangible to understand them and hopefully envision how they could help alleviate load and allow users to work on the more complex task. The workshops hopefully helped users understand the possible application of chat bots, some basic design principles and how content is key wherever it lives.

Can I also say thanks for all the handwork from the bot league team who helped with everything!

I nearly forgot about Geroge……

I knew you were waiting (for me) to clarify why is George Michael all over this post (you gotta have Faith). Naming of things can create personalities and one group named thier chat bot ‘George Michael’ (AS you do). George answered questions on travel from the airport to the university. With lots of references George Michael references the group was praying for time not to run out. On a serious note is a great example of how a simple question grew numerous branches and debate but created the scaffolding for a chat bot that could heal the pain for users. 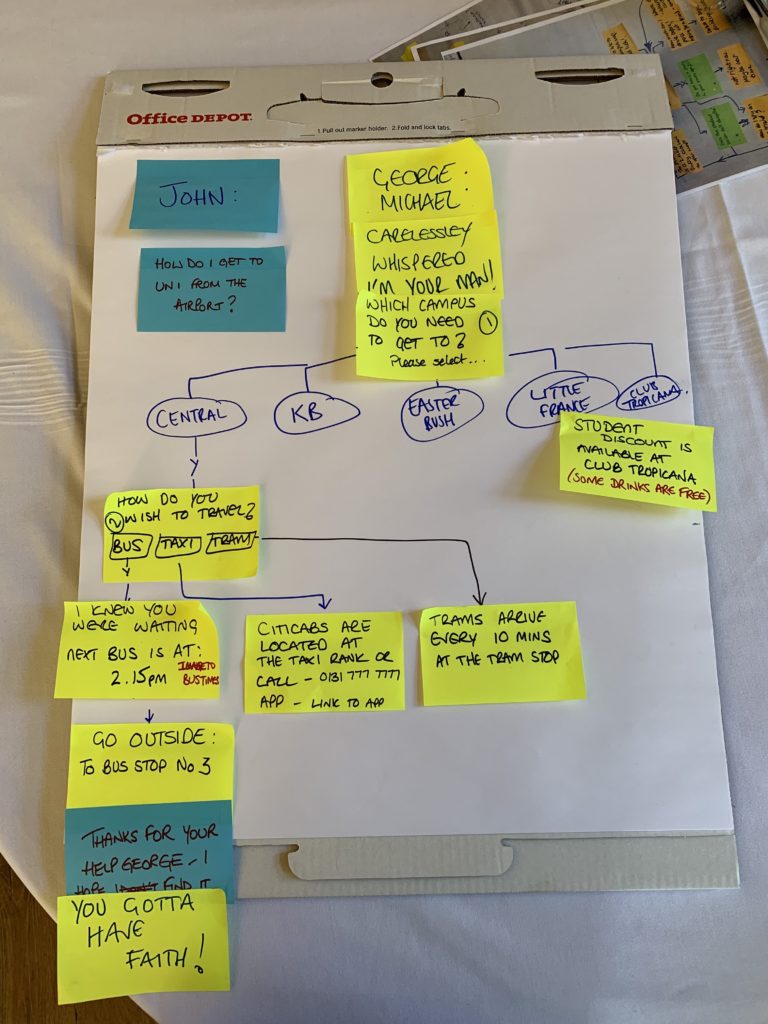 Chatbot Design Workshops and club Tropicanna / mylesthoughts by blogadmin is licensed under a Creative Commons Attribution CC BY 3.0

One thought on “Chatbot Design Workshops and club Tropicanna”

View all posts by mblaney