Emma McLachlan is a 6th-year nursing-turned-medical student at the University of Edinburgh. While she was on her nursing elective in Ghana in 2013, she decided she wanted to step things up and become a doctor. 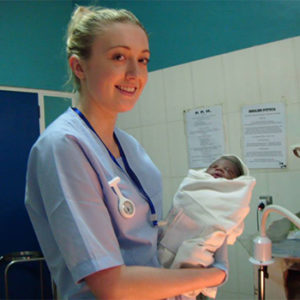 Let’s start from the beginning. What inspired you to travel overseas the first time?

It all started back when I was a nursing student. As part of our nursing degrees at the University of Edinburgh, we were entitled to undertake an elective placement and travel wherever we wanted. A lady from Work the World came to my university to speak to us about our options.

Me and a group of my friends were really interested in what she had to say. It sounded like an amazing opportunity, so we just went for it. We were all keen on the idea of travelling to Africa, and eventually we decided on Ghana.

What was it about Ghana that interested you in particular?

I think it was the fact that at that time we didn’t want to go somewhere that was a big city. Takoradi was away from Accra (the capital), it was near the beach, the hospital was a slightly smaller hospital. It just ticked our boxes.

Can you remember what your first impressions of Ghana were like when you arrived?

I wasn’t sure what to expect, but it was amazing. I remember thinking how beautiful it was. It was clear straight away that were loads of places we could hang out after placement. The Work the World house was close to the beach and that was a highlight too. 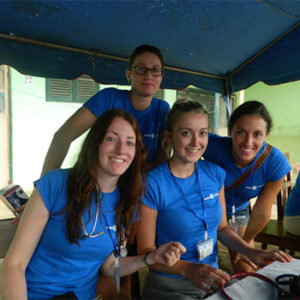 What about your first impressions of your placement hospital?

Well, it was the first time I’d been to a developing country, so it was a bit of a shock. Things were under-resourced and crowded compared to what our facilities are like back home. I think I was initially in the labour ward. It was all so basic and there were a lot of cultural differences compared to what it would be like at home.

Are there any particular patients or cases like this that stick out in your memory?

There was a child in the paediatric department who had meningitis and tetanus. The child’s family was poor, and the hospital couldn’t actively treat the child because the family couldn’t afford it. They wouldn’t let the parents take the child home either. It was difficult to just stand by because nothing was really being done to try to treat this suffering child.

I spent some time in the ED too and I remember they didn’t always have basic resources like oxygen. I had one patient who came in that was unconscious and clearly needed oxygen, but because we didn’t have any, the patient ended up passing away. We never really worked out the cause. He was a young patient too, probably in his 20s.

Those are the two that stick out to me. Memories like that really make me appreciate what we have in the UK.

So, you were getting all of this practical nursing experience while you were in Ghana and on your nursing degree at Edinburgh. But then you decided to switch to medicine. How did that happen?

Funny you should ask at this point, because it actually happened when I was in Ghana. We were sharing a house with some medical students and I chatted to them a lot. I remember asking them about their course and what their careers would be like. It was around then I realised medicine was actually something I’d be quite interested in.

I remember asking them about the application process, and that gave me a much better idea of what I needed to do to start studying medicine. It was when I came back to the UK that I started the process of applying to study medicine.

I was treated in the same way as any other postgraduate applicants. I applied alongside everyone else — school leavers, postgraduates. Everyone. The application process involved an aptitude test called the UKCAT, and I had to write a personal statement then send my application in. Then I had to go for an interview. It’s quite a long process, but it wasn’t actually that complicated.

Obviously nursing and medicine are aligned in terms of their core focus, but the depth of information on a medical degree is much deeper. How did you find that step change in learning?

It was a lot, lot harder than I thought it was going to be. At first anyway. I struggled in the first year. It was a lot of science, which I hadn’t done since… Well I’d done basic science in nursing, but this was a lot more in-depth.

Actually, it was the first two years that were all really science and theory based, which I found quite difficult. By the third year we were into the clinical years and they were much more enjoyable. I’ve enjoyed the whole course, but the first two years were tougher as we didn’t spend any time on the ward.

So, your nursing degree didn’t help you all that much with the science bit. Do you think it helped you in any other ways?

Oh, it definitely helped. As you say, not so much at the start, because what we were learning on the medical degree was so in-depth. But by the time I was in my clinical years and seeing patients, my previous placement experience helped massively.

It seems strange that I’ve only got one week of my degree left. I have to admit, it does feel good to be at the end after nine years at university! I’m about to move to Glasgow to do my two foundation years as a junior doctor.

That’s brilliant news! It sounds like a big step — do you have any anxieties about it?

Definitely. It’s going to be a big learning curve, but I feel as though coming from a nursing background, I know how they run and I know the hierarchies, and I know more practical things that other students in my year might struggle with so I should be fine.

On the degree front, I’m glad I did it this way because now I’m that little bit older and have more life experience. I feel much more confident in what I’m doing than perhaps I did when I finished my nursing degree. I’ve got a much better idea of what I want out of my career and where I want to go, which is one of the main benefits. The more you ask to do things, the more you introduce yourself and get to know people, the more you’ll get to do and the more you’ll gain from the experience.

Work the World specialise in tailoring overseas healthcare placements in Asia, Africa and Latin America. Their destinations provide eye-opening insight into the challenges associated with delivering healthcare in the developing world.

How my nursing elective in Ghana inspired me to become a doctor / Medical student life by blogadmin is licensed under a Creative Commons Attribution CC BY 3.0

If you have a concern about any aspect of your medical student experience, report it anonymously here:
Voicing Concerns