The socio-ecology of land use intensification.

Savannas are the dominant land cover in the tropics, support the livelihoods of 100s of millions of the world’s poorest people, and harbour an ancient, unique, and charismatic flora and fauna (Ryan et al, Phil. Trans. R. S. 2016). They are also widely theorised to be a bi-stable alternative to forests under prevalent climate conditions.

That ecosystems can have alternative stable states has major implications for how we manage and predict the future of the biosphere. The presence of alternative stable states in the dry tropics particularly matters because the low woody biomass state (savanna) and the high biomass (forest) state provide radically different ecosystem services, and the low biomass state supports unique biodiversity.

Despite the importance of understanding the presence or absence of alternative stable states, the empirical evidence to date is weak, and mostly limited to model simulations or analysis of static spatial patterns. In other fields, long term observations of state changes have been used to support the theory, but this has not been done in savannas. Thus, alternative stable state theory remains controversial.

We propose that tropical cyclones represent an important edge-case which can be used as a strong test of the presence of alternative stable states are laying the foundations for an experiment to test this in a cyclone affected area of Mozambique. We will examine both the role of cyclones in savanna demography, and the broader question of the stability of savanna-dry forest systems.

We will test the following overarching hypothesis: Cyclones can trigger a state shift from forest to savanna, which persists due to stabilising feedbacks.

To address this hypothesis, we will address the following questions with a mixture of field work and remote sensing, integrated with a process-based model of savanna dynamics:

Several approaches will be used to address these questions: 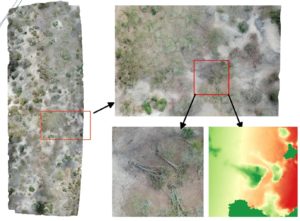