IK is a Project Management Intern at ISG and by far the sharpest dresser. Armed with a triple espresso, he’s often on the go between Argyle House and his true love, Payroll.

Similarly to many other interns, I wasn’t confident on what to expect from my summer.

Perhaps the title of my job being somewhat of an oxymoron made it harder for me to speculate what my responsibilities might be. When I was handed my ‘Project Management Intern’ contract, one thought went through my head: surely they wouldn’t actually let an intern manage a project?

It wasn’t until I had my first bite of the internship pie on the 4th of June that I tasted the true meaning of my role.

I’m currently assigned to two projects where I get to work as part of the teams but also closely with the project managers. This has given me the chance to learn about the various planning and communication methods needed to deliver project objectives. Working in two teams means I’m also being able to see different styles of project execution which I am discovering is quite person/team specific.

On one of my projects, UniForum, I’m exposed to a lot of data handling and data manipulation. With this being done primarily on excel, I’ve learnt to love and become quite accustomed to unarguably the most dreaded office suite. I’ve had the opportunity to learn some of the weird and wonderful things excel can do and there’s truly no going back. Hopefully this helps me out during my next 2 years at uni and even further, but even if it doesn’t, I am forever changed: I am at the point where I’m making up spreadsheets instead of using a Word Processor because a day not spent on excel is a day truly wasted.

A great bonus of my work with UniForum has been my fabled trips over to the Payroll Office on Chambers Street.

Essentially, I get a *shock* spreadsheet of names of all the casual workers the university hires and I populate the spreadsheet with the information on these elegant pieces of paper called Form 100s.

The most important parts of the 6-page Form 100

Every name on the spreadsheet has a corresponding Form 100 in the shelves over at Payroll and I fill out the list with the 3 indicated entries. Very routine work for 3 hours? Yes. But as I arrived in the team with an empty schedule and I personally wanted to fill out my Outlook calendar it made sense to me to be a keen bean and get involved.

After the first afternoon in Charles Stewart House, I thought best to add some variation to the 3 hours as my enthusiasm would definitely not have withstood 9 afternoons. In came Spotify: my adventures across town became an expedition to discover new music as much as data entry. With one more trip to finish off my internship left as of today, I reflect on my excursions away from argyle house which rejuvenated my trust of pressing shuffle on playlists.

I finally got to listen to albums all the way through which is something I’ve always wanted to do but never really have the time and these are some of my thoughts on them.

ye by Kanye West [8,5/10]– got released less than a week before the internship, reviews said it was controversial and I wanted to see how. It is not that problematic; I would recommend.

Lost and Found by Jorja Smith [7/10]– just happened to be released on one of the days I went over. The good songs are very good, but not all of them attracted this novice excel wiz. Highlights include LifeBoats, Blue Lights and Where Did I go.

Ctrl by SZA [6.5/10]– Spotify recommended this to me after my Jorja Smith binge. It was a poor recommendation as I didn’t find them to be similar music styles. Some tracks were exquisite, and some were okay. Highlights include Supermodel, Drew Barrymore and Broken Clocks.

A few other I listened to; COSMIC by Bazzi and Good for You by Aminé [both 5/10s]. Good albums but most of the songs are in similar style and whilst I’m not a music aficionado I felt I was listening to the same songs over and over again but with different lyrics.

In between albums, Spotify’s Discover Weekly provided some absolute gems when I gave it a chance, so I’ve made a playlist consisting of the best of the best: 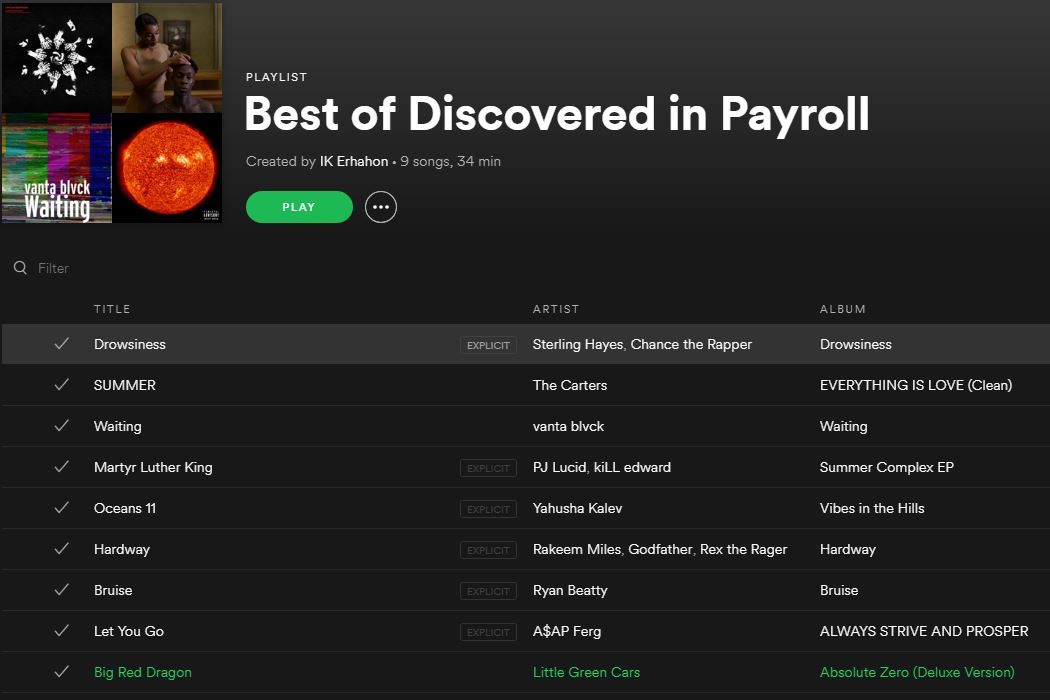 Would highly recommend these songs for the first half hour of the work day, eases you into it.

Ultimately, It’s been good to have the understanding of taking responsibility of your own experience of things. Working as part of a team does mean that sometimes, people have to do the less glamorous jobs to achieve their final goal.

All things considered, looking through and filling in 1,353 forms can make for quite idyllic afternoons.