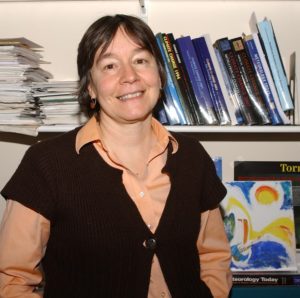 Climate diagnostics and statistical climatology;
variability and changes in temperature, precipitation, climatic extremes
Constraining future climate change by estimating the magnitude of observed climate change,
use of palaeo proxy data to study climate variability and change during the last millennium.
Fellow of the Royal Society, the Leopoldina, Royal Society of Edinburgh, and fellow of the American Geophysical Union and American Meteorological Society. I received a Royal Society Wolfson Merit Award. I am very grateful to have received the Hans Sigrist Prize of the University of Bern in 2016.
You can hear me talk about my research here:  https://forecastpod.org/2018/12/19/episode-23-gabi-hegerl/ and also in a podcast by Michael White (among other places), and in a program in German on emotions of scientists in view of the climate crisis https://br.de/s/4jbIXcX.

I lead the European Advanced Grant ‘Transition into the Anthropocene (TITAN)”, 2013 to 2019) which determined the causes of climate variations and change from the Industrial Revolution to the present time. It found that the cold conditions in the early 19th century were largely caused by volcanic eruptions. The ‘year without a summer’ 1816 in Europe was greatly influenced by the eruption of Mount Tambora (Schurer et al., ERL 2019). From this active volcanic period climate rebounded to warmer conditions over the 19th century, by the end of which greenhouse warming can be detected in longterm trends (Hegerl et al., WIRES 2018). We found that exceptionally cold conditions in the South Atlantic during the beginning of the 20th century, which spread northward, enhance the slope of the warming trend into the early 20th century warming. That warming culminated in an unusually warm North Atlantic in the 1940s, which TITAN found was involved in setting the stage for the dry springs and record hot summers in the Great Plains of the US (Cowan et al., J. Clim. 2017; Cowan et al., Nature Climate Change 2020; Cowan et al., Nature Comm. 2020). Climate models do not reproduce these record heat waves under ‘standard’ climate boundary conditions, but can simulate similar heat waves if accounting for the removal vegetation associated with the dustbowl droughts and agricultural crisis.

TITAN also investigated the origin of climate variability which cause increases or decreases in the rate of warming, such as the slowdown of warming that ended recently (Schurer et al., GRL 2015). It found that climate models simulate such periods, but that for the longest and strongest periods, large volcanic eruptions are a pace-setter. An apparent mismatch of the response to volcanoes in models and data was attributed to coincidence with El Nino events (Lehner et al., GRL 2016). TITAN also showed that global warming influences precipitation patterns in similar ways in models and data, when using long island stations (Polson et al., ERL 2016), and that global warming enhances the contrast between wet and dry regions of the planet, while volcanic eruptions decrease that contrast (Iles et al., Nature Geosc. 2015). The warming since industrialisation can be used to constrain the future warming response, although not very tightly as uncertainty in the cooling caused by aerosol pollution is considerable (Schurer et al., J. Climate 2018).

in the past, i was involved in the projects Pacmedy, Eucleia , Pagoda and EQUIP and led a NERC Project on the causes of change in mean and extreme European climate in the last five centuries.

I have organised the 11th IMSC in Edinburgh
and was PI for the International Detection and Attribution Group until 2010, and am now on its steering group.

Emma Yule on extremes in early records, and  GloSAT

James Fulton on use of machine learning methods to detect modes of climate variability;

Lucie Luecke on understanding of climate of the last millennium reconstructed by treerings;

Carley Iles on effect of volcanic eruptions on precipitation, graduated 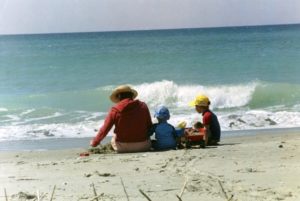