As I was carrying out research about the discourses of authorship in Frances Burney in the 1770s and 1780s, I came across this article by Peter Sabor https://voltairefoundation.wordpress.com/tag/eighteenth-century-music/

Intriguingly, Sabor mentions a correspondence between Dr Burney and a Frenchman, the philosopher and politician Jacques Pierre Brissot, who made enquiries about reproducing a portrait of Frances in a new periodical soon to come out in French. (Cecilia had been published in 1782, the year before this epistolary exchange took place, and it had become a Europe-wide success.) Sabor says that the Doctor dictated his reply to Frances, and responded that “although his daughter is flattered by [Brissot’s] request, she cannot grant it.” I find this response very intriguing, as is the following note made by Sabor: “Thomas Cadell, the publisher of Cecilia, had also wished to reproduce her portrait as the frontispiece to the fourth edition, ‘mais y ayant une répugnance invincible, elle lui a donné un refus absolu’ .” This response is very much in line with Frances’s well-known 1778 letter, in which she writes: “I have an exceedingly odd sensation when I consider that… a work [Evelina] that was so lately lodged, in all privacy in my bureau, may now be seen by every butcher, cobbler and tinker, throughout the three Kingdoms, for the small tribute of three pence.”

However, another point may be worth making. At the time, the publisher Cadell obliviously thought that a new edition of Cecilia with the author’s engraved portrait would have significantly increased sales. At last, it would have been possible to associate to an image -hence, to commodify- the otherwise blank face of “the author of Evelina” (see the frontispiece below). Which brings us back to the popularity and market appeal of authorial images in the fast developing XVIII-cent. literary market.

Frances’s feelings must have changed shortly after, though, as proven by the famous portrait I reproduce below painted by Frances’s cousin, Edward Francisco, round about the same period.  I shall make another post about this portrait and the truly extraordinary hat – the so-called ‘balloon hat’ – worn by Frances. (It is also the inspiration behind the name of my blog.) This is just an introductory post about how the discourses of authorship are skilfully constructed around market requirements, cultural capital building and, indeed, self-branding. 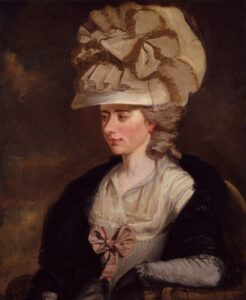 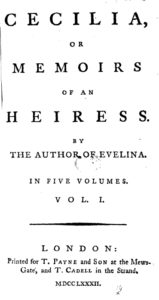 Portraits that never happened by Fran Saggini is licensed under a Creative Commons Attribution CC BY 3.0.
Based on a work at https://blogs.ed.ac.uk/fsaggini/?p=150.

Portraits that never happened / The Lady with the Balloon Hat by Francesca Saggini is licensed under a Creative Commons Attribution CC BY 3.0 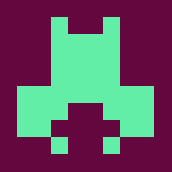