Blogs from the School of History, Classics and Archaeology

This October we are celebrating Black History Month, and we asked some of our tutors who study Black history within the School for aspects of Black history that they think are untold. From influential figures to fascinating manuscripts, these sources give us a deeper understanding of Black history and why it is so important that we pay more attention to these histories and mark Black history at all times of the year.

We understand that by writing this as non-Black people we cannot understand or represent fully what Black History Month means, and we recognise that there is an urgent need to not only be more inclusive of Black voices in academia but also a wider push within the discipline of history as a whole to amplify Black writers and stories.

You can find out more about the work of these tutors at research.ed.ac.uk Check out the RACE.ED blog (www.race.ed.ac.uk) and the BlackED movement on campus who are carrying out fantastic work on racial literacy and much more. Another great source of knowledge is The Black Curriculum (theblackcurriculum.com), which campaigns for a greater representation of Black British history in the UK. 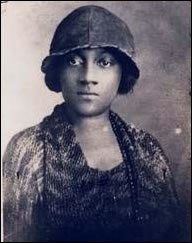 In both Jamaica and the United States, Amy Ashwood played a major role in the founding and organisation of the Universal Negro Improvement Association, alongside her future husband Marcus Garvey. In a peripatetic career, she remained a significant figure in Black Nationalism after her divorce in 1922 and subsequent relocation to London, where she mixed with activists and intellectuals from Britain’s colonies and, with Ladipo Solanke, helped form the anticolonial Nigerian Progress Union in 1924. Ashwood returned to London in 1935, where, along with C L R James and George Padmore, she helped establish the International African Friends of Abyssinia to protest against Italy’s invasion. She also opened the International Afro Restaurant and the Florence Mills Social Parlour, both of which became meeting places for activists. In 1937, Asghwood, alongside notables that included Jomo Kenyatta, launched the International African Service Bureau, which championed anti-colonialism and self-determination. In 1945, she was one of only two women who addressed the Fifth Pan-African Congress in Manchester. Ashwood chaired its first session and, in a report, condemned inattention to black women’s concerns. After living in Liberia between 1946 and 1949, she returned to London, where she helped found the Afro-Women’s Centre and in 1958 the Association for the Advancement of Coloured People. Ashwood returned to Liberia in 1960 for four years, and, after some time in London, relocated to the West Indies, dying in Jamaica in 1969.

This week, students in ‘African Intellectual History’ are reading The Life and Struggles of Our Mother Walatta Petros, the earliest known book-length biography of an African woman. Written in Ge’ez in 1672, it tells the story of Walatta Petros, a female saint of the Ethiopian Orthodox Tewahado Church who led a successful resistance movement against Portuguese efforts to convert Ethiopians to Catholicism. She is revered to this day as an exemplar of strong female leadership and independent African Christianity. 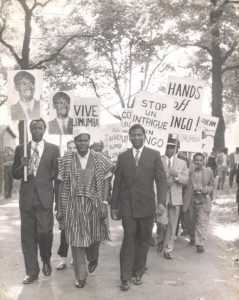 This resolution has remarkable contemporary resonance, but it was passed sixty years ago this month, at the All-African Students Conference (AASC) in London, 12-14 October 1960. The British security services (who kept a close eye on the conference, due to its links with the British Communist Party) dismissed the event as a failure, claiming that it was poorly attended because its organisers, the students and political exiles who constituted the Committee of African Organisations, had sent invitations too late. But looking back at the eighteen resolutions these students passed, we can see the AASC for the achievement it was. The students subverted the Iron Curtain at the height of the Cold War, inviting African participants who were then studying in Eastern Europe, and holding successor events in Belgrade and Moscow during the next few years. They tackled decolonisation of the curriculum even while many were directly involved in the struggles to win political independence for African countries that were still under European colonial rule. They were thinking about the problems of neo-colonialism too: their resolutions protested foreign intervention in the newly independent Congo where, three months later, the country’s first elected Prime Minister, Patrice Lumumba, would be murdered.

This conference may itself not have made it into textbooks but, as Priyamvada Gopal has argued, the resistance of people around the world to colonial rule provided lessons and inspiration for protest movements elsewhere – not least in the UK, where white British people would soon begin to rally around the fate of Lumumba too. Indeed, some of these students had attended a similar Pan-African Student Conference two years previously at Makerere College in Uganda – both events are part of the longer genealogy of protest which inform current demands for decolonising the curriculum.

Both these conferences are explored in Ismay’s forthcoming book. Her current research is part of the project ‘Another World? East Africa and the Global 1960s’ (https://globaleastafrica.org/)

Many of the most powerful voices in the campaign to fully abolish slavery were those who had experienced it themselves. James Williams was one of these. Born into slavery in Jamaica to an African mother, Mira, and an enslaved father whose name was not recorded, he became briefly famous in Britain in 1837 with the publication of his A Narrative of Events, since the First of August 1834. The pamphlet told in powerful prose of the terror and violence inflicted under the system of apprenticeship, which the British government had in 1834 instituted in the Caribbean colonies, the Cape Colony, and Mauritius. Apprenticeship was supposed to be a gradual means of ending slavery, but Williams’s pamphlet argued that far from representing an improvement in conditions, apprenticeship had made things worse. Based on his own experience and those of others he knew, Williams stated that ‘Apprentices get a great deal more punishment now than they did when they was slaves; the master take spite, and do all he can to hurt them before the free come.’

Williams’s pamphlet was a best-seller. His shocking exposé led to investigations in Jamaica and discussion in the Houses of Parliament. It played an important role in mobilising public opinion in Britain against apprenticeship, which ended in 1838, two years earlier than the government planned. His own subsequent history is difficult to trace. The Quaker abolitionist Joseph Sturge, who had paid for Williams’s freedom and his passage to Britain sent him back to Jamaica in late 1837, where he quickly disappeared from the historical record. He symbolises the complicated alliances between enslaved people in the colonies and abolitionists in Britain in creating a successful movement against slavery.

For a longer introduction, see Diana Paton’s edition of A Narrative of Events, published by Duke University Press. DiscoverEd 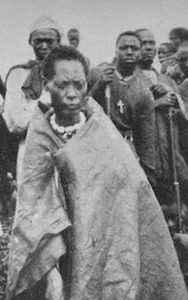 In the UK we often suffer from a lack of awareness and lack of nuance when it comes to understanding histories of colonialism in Africa. Such issues of representations are part of our national ‘imperial amnesia’, which is being increasingly challenged by anti-colonial activism.[1] Yet much work needs to be done to complicate and better publicise the experiences of African people under colonialism. African people were not passive recipients of colonial rule or the ‘civilizing mission’ which underpinned it.

In the early twentieth century two East African women took up arms against British and German colonialism. Between 1900 and 1911 Muhumuza, or Muhumusa, a member of the Rwandan royal family and a medium of the deity Nyabingi launched a campaign against King Musinga, an ally of German colonialism. Her charisma and spiritual power sparked the first armed responses to colonialism in the region, and her virulent anti-colonialism and anti-Christian stance resulted in a rare moment of European solidarity as German, British, Catholic and Protestant actors came together to subdue her. She was twice imprisoned and exiled in Bukoma and eventually Kampala, where she died under house arrest in 1945.

Two years later in 1913 and 1,500 kilometres away on the Kenyan coast another female leader, Mekatilili wa Menza led her people, the Giriama, against the encroaching presence of British colonialism. In response to demands for labour and the spread of Christianity, Mekatilili, a widower without any prior claim to authority, spoke out against the British at public meetings, even allegedly slapping the region’s colonial administrator. She went on to launch a campaign of civil disobedience, cultural pride and non-co-operation. She was arrested and exiled, Giriama lands were seized, their spiritual sites desecrated, and punitive labour recruitment instigated. Mekatilili has since inspired Kenya’s feminist activists and has become an increasingly popular national figure.[2]

Whilst Muhumusa and Mekatilili operated in different contexts, both utilised spiritual and cultural histories to resist colonialism – it was through pre-existing African ideologies that territorial and spiritual colonialism were challenged. The courage and conviction of these two figures was remarkable, as their campaigns disrupted the racial and gender hierarchies which underpinned colonial rule. Through their compelling cultural power and apt critiques of colonial interference they mobilised large numbers of African people to take up arms and repeatedly shook the tenuous structures of colonial power.

Muhumusa and Mekatilili helps us think more expansively about what anti-colonialism looked like. Anti-colonial resistance came in many forms then and continues to do so now. Highlighting the lesser-known histories of those who fought colonialism helps further understandings of the complexity of African social and political economies and the ways in which non-Western beliefs and cultural practices were used with anti-colonialism. In a contemporary political environment where public figures feel emboldened to discuss ‘Why the West Won’, it is important to remember those figures who challenged ‘Western’/white supremacy. Muhumusa and Mekatilili’s celebration as heroes in East Africa foregrounds how black memories of empire contribute towards a more nuanced understanding of history and encourages the on-going struggle for decolonisation within Britain and East Africa.[3]

[1] The Rhodes Must Fall campaign being the most obvious anti-colonial dialogue between South Africa and the UK.

Black History Month / shca by blogadmin is licensed under a Creative Commons Attribution CC BY 3.0 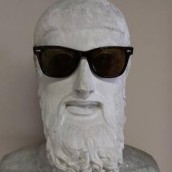 Working as a student