I have explored the way that the medium can influence the artwork itself. To do this I have used ink on mediums such as creased paper and the textured outer layer of coffee cups. 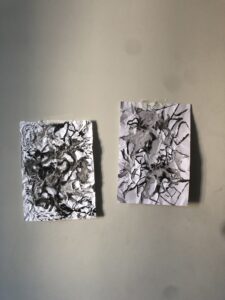 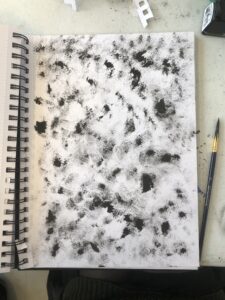 In doing this I have been most intrigued by drawing as an object within itself. Therefore I developed these studies by producing more objects and experimentation with sculpture. For example, I used clay to emulate the geographical appearance created by the creased paper and ink. This has resulted in shapes and objects with a geographical appearance. 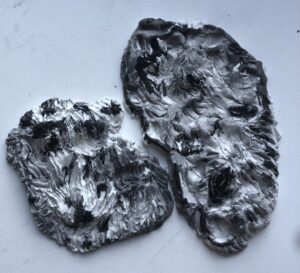 I used found objects to explore the different impressions they leave on paper. These included natural material, string and wire.

I was most interested in was the textural  impressions left on the paper by the leaves that resembled that of skin. This motivated an exploration of the way the human form is reflected in forms other than itself. I thereby made impressions of the skin of the palm of my hands to parallel its pattern with the leaf.

Here are some different ways I tried to present this as a sculpture: 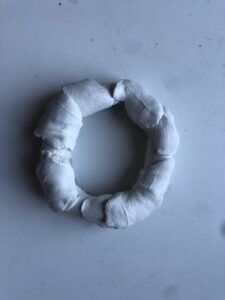 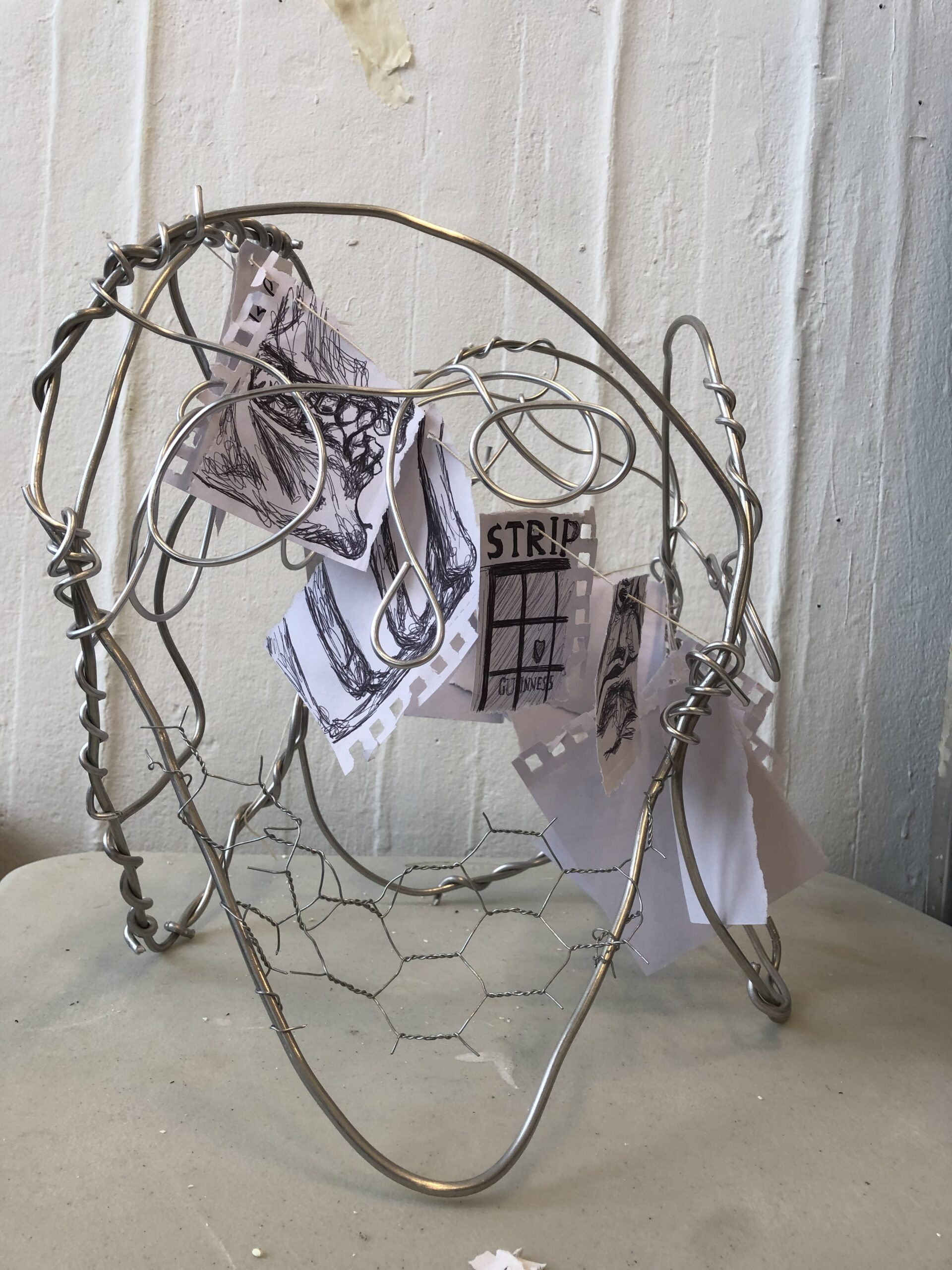 Like many of the stories of the past, the Burke and Hare narrative is revered and capitalised upon as a result of its dark content that plays on the mind. For this reason I have chosen to explore the narrative itself and the way that, alongside other tales of mortality, it is reflected in modern life.

The story goes as follows: After the death of a resident in Hare’s inn, the two decided to sell the body of the man to a man named Dr Knox. In doing this, they were profiting from the shortage of cadavers, selling corpses in a time of shortage in the medical world. As a result,  this escalated into a series of killings in order to make a profit until the two were eventually caught in 1828.

In sequencing this narrative I noted many ways stories of death are remembered in modern settings:

The Burke and Hare strip bar is one example of the macabre story acknowledged in the present.

The death mask of Burke is present in the Surgeon’s museum.

At Greyfriars, one can leave a stick for the Greyfriars Bobby as well as attending a pub memorialising the tale.

Studying the way this story, alongside other death narratives are remembered, there is a common factor of consumption: Death is negated by consumption, by the satisfaction of the individual’s most base desires. For example the death mask of Burke sits in a museum for people to consume.Greyfriars Bobby is available as a statue, used for selfies, as well as through the ritual of giving the dog a stick, a material item gifted to a dead thing.  This is most prominently seen in the Burke and Hare strip bar, a location where people satisfy their base desires. Ironically, these are the most transient aspects of living.

I tried to convey the way that humans attempt to reconcile their spiritual mortality with material immortality.  I created my own wire version of a death mask in order to foreground the sense of permanence humans try to create through objects after death. I tried multiple ways of displaying these death masks, by being suspended on a wall and as a sculpture. As a sculpture, I found that the features of the faces change depending on the way the other faces were attached and positioned in relation to each other. This intrigued me as it meant that two faces placed opposite each other combined to create one, and further moved as one the angle from which one viewed the sculpture changed. 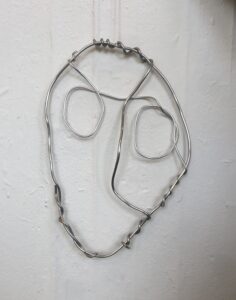 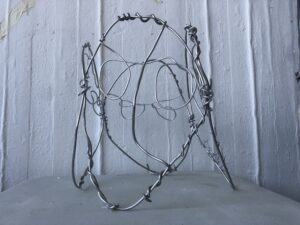 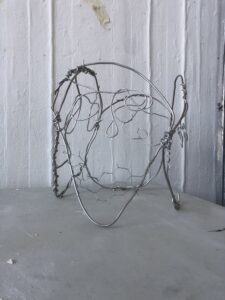 I attempted to combine the Burke and Hare story with the appearances these narratives of death make in modern society. In doing this, I created a banner of hand drawn images, fragmenting these narratives. These images included the deathmask, the greyfriars bobby, gravestones etc. I explored ways of displaying this, both alongside and entangled with the sculpture. 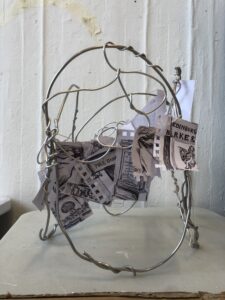 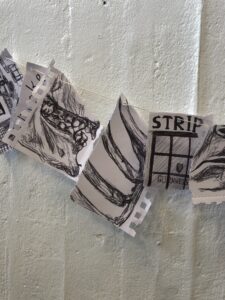 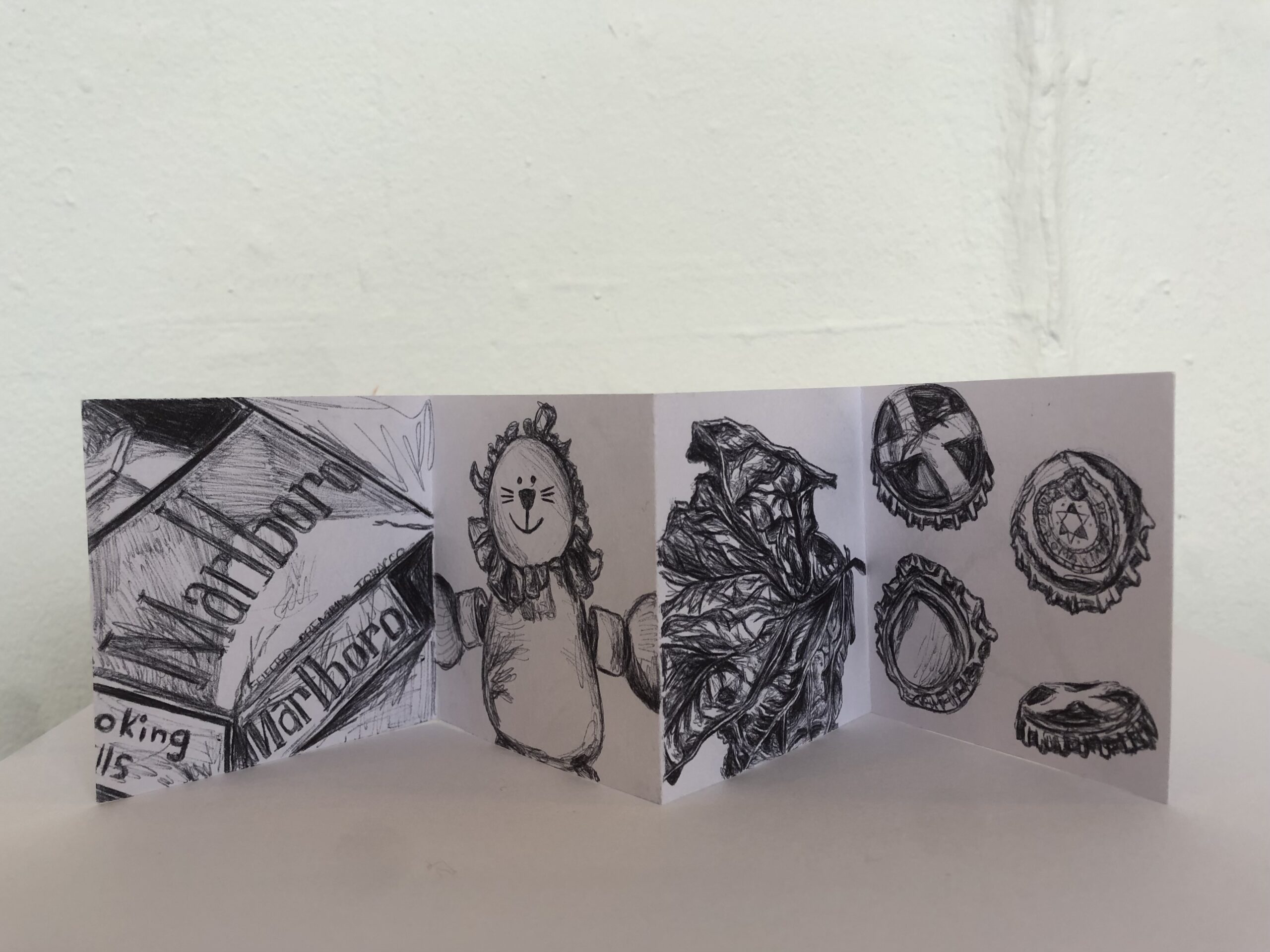 The city in dialogue with itself

“The foreignness of what you no longer are or no longer possess lies in wait for you in foreign, unpossessed places.” Central to Italo Calvino’s work, Invisible Cities, are the varied impressions of the same city. He depicts each account of Venice to be a new city, profoundly different from his preceding descriptions. Using this line, Calvino foregrounds the presence of opposition to the individual within the city. One can experience a city that is entirely unique to the life of another inhabiting that same city. The individual therefore develops a unique sense of being within the city. This works in parallel with the Hegelian dialectic: In this, Hegel reveals that the thesis (in this case the individual) encounters their antithesis, (the city) and thereby works to create the individual’s synthesis (their unique subjective experience.) As a consequence of these many impressions, the city becomes a being within itself, as it is formed by the multitude of different experiences of the city. Thousands of different ways of seeing the city become interwoven to make one larger entity. It reaches divine proportion, as it is too vast to be truly understood by the individual alone.

In my project I have aimed to create work that highlights the multi-layered nature of the city. Through found objects, I have attempted to show the profoundly different experiences of Edinburgh that exist simultaneously. From baby toys to broken glass, these items are representative of juxtapositions such as innocence and experience, the natural versus artificial, and pleasure versus constraint. These objects were chosen to symbolise these varied understandings of the city in a dialogue with oneself. For example, the relationship and inner conflict one may experience through the change from childhood to adulthood, and the way this is reflected in one’s view of the city. My intention is that the viewer, each with a distinct perspective of their own, can look upon these opposing objects and come to a deeper understanding of themself, through the conflicting objects and their relationship with them.

I have experimented with the use of tracing paper and rubbish to create layers within my work. These visually represent the many avenues of experience in the city. Their translucency facilitates the overlapping and clashing of different images, which is intended to capture the true complexity of the place where they were found. Furthermore, by layering these pieces of paper I have been able to toy with the significance of certain objects and their associated experiences. By placing certain layers above others, I can explore what the individual is perhaps “no longer”, or aspects of experience that are overcome by others, creating a wider conflict.