Skip to content
What is the study of WEIRD?
First of all, we can focus on the word weird, which most people think of as a pejorative, a word that denotes bad luck, misfits, abnormal or eccentric, or even suggests a sense of unease or fear, both mysterious and evil forces at work, or the mysterious calm before the storm. But at the same time, weird can actually be a positive word, unique, extraordinary in character and out of the ordinary, and this unique adjective, when used in thought, can add greatly to one’s creative thinking and ability to think, as often weird also means outside the confines of the rules. For example:
Shakespeare’s relationship with the bizarre
You may know that weird is a generic term to describe something unusual, but the word also has an older, more specific meaning. Weird derives from the Old English noun wyrd, which essentially means ‘fate’. By the 8th century, the plural wyrde had begun to appear in texts as a word for Parcae, the Latin name for the goddesses of fate – the three goddesses responsible for spinning, measuring and cutting the threads of life. In the 15th and 16th centuries, Scottish writers used werd or weird in the phrase ‘strange sisters’ to refer to the goddesses of fate. William Shakespeare adopted this usage in Macbeth, where the ‘strange sisters’ are described as three witches. Subsequently, the adjectival usage of weird arose from Shakespeare’s reinterpretation of weird. At the same time we can also find weird in other areas of relevance, with cosmic strings second only to black holes in the astrophysicist’s pantheon of weird objects. They are narrow, super-dense filaments that form in the first microseconds of the universe’s history during a phase transition called ‘inflation’.
If you look closely at them, you will find them carved with strange pagan creatures, more like goblins than people, half-hidden between trees and leaves – here a prickly tree, there what looks like a palm tree.
As an extended fictional device, allegory is mainly used in didactic and satirical fables such as Gulliver’s Travels, Animal Farm and Iluhon. In these masterpieces, ostensibly realistic representations lend a certain strange plausibility to bizarre events …… — David Lodge, The Art of Fiction, 1992
So in any field there is a way of research about weird, to think outside the box to interpret and research can always explore the unexpected results, especially in the art industry, I think art is not only from life, but also above life, and why say above life? Because a good piece of artwork can often cause people to reflect on social events, people’s experiences or the past or the future, and in order to cause reflection, the art creator needs to think outside the box, and this is where WEIRD’s way of thinking is important. In the Theme course, I brainstormed and did a word-making activity in a weird workshop. 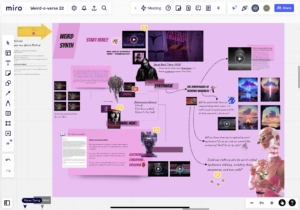 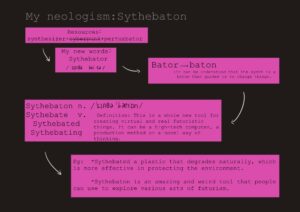 I have selected the French synthwave musican- James Kent, who is an electronic musician, for my research. He has borrowed from three films and extracted three backgrounds from futurism, anti-utopia and cyberpunk as his creative concept. The compositional elements of his music are electronic, fractured and mechanical, and he uses synthesizers to form his own style of music. I think he’s also exploring futurism, only in music, but what if we could use synthesize to explore other fields of thought? Or do these only exist in the brain? Will our future food also be replaced by weird synthwaves? Smell? Or eat by sight? Could our clothing also be weird virtual synthwave clothing, including shoes, accessories, and even pets? I think these kinds of thoughts are not just limited to the realm of artistic creation, but are also very relevant to thinking about the future of the real world. This leads to another topic – is weirdness soliciting legitimate forms of research or encouraging pseudo-research? I believe that forms of pseudo-research should focus on how to think about pseudo-research, that we should use the critical thinking and out-of-the-box thinking skills of pseudo-research to explore the viability of the present and the future, and that the examples available today are interdisciplinary thinking and the ability to collaborate. For example, Dyson appliances, a household name, are the result of a collaboration between the engineering disciplines of Imperial College and the design disciplines of the Royal College of Art.

In WEIRD’s class, we learnt about conspiracy theories and did some practical work on the course. In the class, we discovered that through conspiracy theories we can make the mundane unbelievable, as we can see in livescience websites, where many things that we don’t think would be linked together can be linked so naturally by the editors, and this kind of thinking beyond the framework of leapfrogging allows one to think about things themselves from a different perspective and use the thinking skills of pseudo-research to achieve the exploration of future research.In the classroom, we chose the news of dying in bed as a point of inspiration and extended it to the very challenging conspiracy theory of cold, cheese and fire in tandem. How does dying in bed relate to cheese? Our understanding is that because of the cold, we eat a lot of high calorie cheese and the excess heat rubs against the air causing the fire. From this we can compare how cheese as a work of art can break our common perception of the situation? How does it kill people, usually we think it is due to the excessive consumption of high-calorie cheese, which leads to obesity and therefore to disease, while conspiracy theories insert elements from other areas (allergies, fires and after sex).
So an ordinary thing may not break our perceptual habits, but once we redefine the way it develops by thinking in a WEIRD way, we can explore the tandem of things from different areas and thus have a different view of the same thing, and once we get used to brainstorming in this way, we can not only critically appreciate the artwork, but even create great artworks of our own.
Sep 30, 2022

Sprint 1 weird / Tianxing Peng / Themes in Contemporary Art (2022-2023)[SEM1] by blogadmin is licensed under a Creative Commons Attribution CC BY 3.0