Anna Anderson, Research Support Adviser, explains apprenticeships and how to include a Graduate Apprentice in your research proposal.

Last month, the University of Edinburgh announced that we will help deliver Scotland’s first Graduate Apprenticeship in Data Science alongside the University of St. Andrews and the global consulting giant PricewaterhouseCoopers.

What is a Graduate Apprenticeship and how is it funded? 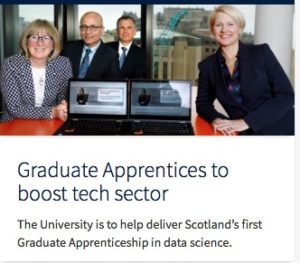 What are the benefits of apprenticeships?

Apprenticeships future-proof organisations by ensuring that key strengths are grown and specific skill gaps are filled. They also enhance retention and improve organisational performance, especially since the introduction of Modern and Graduate Apprenticeships.

But what does this mean for Higher Education Institutions (HEIs), particularly in Scotland?

Most universities in Scotland will be paying the Levy. In February 2018, the Universities & Colleges Employers Association (UCEA), declared that ‘Scotland expects to receive £221 million of Levy funding’.

There have been concerns in the sector about how the various apprenticeship models can be applied to an already very highly qualified workforce within HEIs.  However, with the launch of Graduate Apprenticeship in Data Science, the University of Edinburgh has shown what can be designed.

Incorporating a graduate apprentice in your research grant proposal

Graduate Apprenticeships provide a brilliant opportunity to include an apprentice in a research grant proposal and, furthermore, the possibility of delivering an apprenticeship in partnership with industry.

There is, however, a small down side to the Apprenticeship Levy for universities.  As most funding is received through grants, not all funders will allow the Levy to be included in grant costing as an employment cost and those that have agreed to include it, will not allow amendment to applications that have already been submitted or are existing.

The Research Support Advisors are available to help you and all are aware of the guidelines for each funder, ensuring that any shortfall in salary funding is accounted for at the very beginning of your project. Please get in touch if you are interested in including a Graduate Apprentice in your proposal.

Anna Anderson is a Research Support Adviser in the College of Medicine and Veterinary Medicine.

More from this author

Graduate Apprenticeships: Building skills for the the future / by blogadmin is licensed under a Creative Commons Attribution-NonCommercial-NoDerivatives CC BY-NC-ND 4.0