On the blog today, Al Innes, gives us the skinny on the newly announced Research and Technology framework from the European Commission.

Gathered to discuss the EU budget, European officials unveiled plans last night for the next wave of European research funding. Long-mooted as FP9, the new phase of research and technology funding between 2021 and 2027 will be titled ‘Horizon Europe’. European commissioner Carlos Moedas was keen to emphasise that the European Commissions’ 9th framework would be case of ‘evolution not revolution’ as he explained the new name behind the proposed 100bn fund. Writing on his blog to mark the day’s announcement, Moedas explained:

‘[We chose] Horizon, because our brand means excellence. Over the past few years, the name “Horizon 2020” has sent a clear message across the globe: excellence. We have built a global reputation as a world leader in research and innovation programming…’ 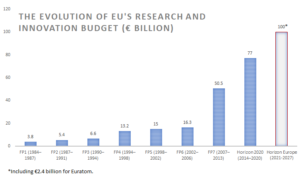 The European Commission sent member states, as well as the European Parliament, a proposed total budget in excess of €1 trillion, equivalent to 1.11 per cent of the EU27’s gross national income. It included reductions of 5 per cent each to the two largest EU spending programmes, farm and regional aid, to make room for more spending on research and defence. The new research programme is one of the few EU budget areas to increase in the Commission’s seven-year proposal; another is the Erasmus+ student exchange programme, which sees its budget double to €30 billion. The Commission also requested €4.1 billion funding for defence research – an increase on the €3.5 billion originally proposed and way up from a current, €90 million pilot programme. The amount, if granted, would place the EU among the top four defence research and technology investors in Europe.

This budget is currently just provisonal and it is possible that it was increase, potentially significantly. If countries such Switzerland, Israel, and Norway join the programme as they are expected the overall budget will increase. The UK has also expressed a wish to access the next EU research programme, further enhancing the budget’s top line.

1. It will be simpler – The new programme will “rationalise” the nearly 100 industry and member state co-financed competitions in Horizon 2020, while at the same time sweeping away some of the programme’s complicated rules and acronyms.

2. It will be more business-friendly – Horizon Europe will put a bigger emphasis on combining grants with loans and equity, bringing business into the research space in a more plausible way than ever before.

3. It will be more open – Horizon Europe endeavors to make serious gains on the open access front. As things stand only around two thirds of scientific publications supported by EU funding currently meet this standard. Going forward, open access will be the general rule in the next programme, although there will continue to be exceptions for commercial and personal data.

4. It will be bigger – There will be significant changes to the rules governing foreign participation, so wealthy countries can join the programme more easily. The general access for entities from all third countries “will be maintained, while encouraging comparable reciprocal access to third country programmes”.

5. It will matter more to people – Citing “the clear need for greater outreach to citizens,” the programme will hope to increase engagement with the public more than ever before; citing examples such as achieving plastic-free oceans by 2030 or ensuring the survival of three out of four cancer patients by 2034. With an enlarged budget and a perception that this new framework will look to address previous issues, there is even more reason to be optimistic about applying for European research funding

We will have more in-depth analysis of Horizon Europe in the coming weeks, as as always you can keep up-to-date with European goings on at the Universities’ European Pages.

The European Union has functioned with long-term budget frameworks as far back at 1988 and these have variously covered periods of 5 to 7 years. The first of these, dubbed the Delors Package I, covered 1988-1992 and focused on establishing the Single Market and consolidating the multiannual framework programme for research and development. 1993-1999 was covered by the appropriately named Delors Package II, this time priority to social and cohesion policy and the introduction of the euro

In 2000, “Agenda 2000” was launched covering 2000-2006 and focused on the enlargement of the European Union. The 2007-2013 long-term budget gave priority to sustainable growth and competitiveness, in order to create more jobs. The 2014-2020 long-term budget aimed at getting people into work and the economy growing, tied in with the Europe 2020 strategy for smart, sustainable and inclusive growth. Within each of these budgets, the ‘FP’ programmes have been used to support and foster research, with the last specifically titled FP, FP7, giving way to Horizon 2020 in 2013.

Al Innes is Research Development Officer for the College of Arts, Humanities and Social Sciences within the Research Support Office.

More from this author

Horizon Europe outlined as EC seeks to ‘capitalise on strong brand’ / by blogadmin is licensed under a Creative Commons Attribution-NonCommercial-NoDerivatives CC BY-NC-ND 4.0