The first Safe & TogetherTM European conference is taking place in June 2019 in Stirling, Scotland. Safe & TogetherTM is a model for domestic violence informed child welfare work. The Improving Justice in Child Contact project is excited to see how Safe & TogetherTM might be used across Europe because the principles of Safe & TogetherTM include intervening with the perpetrator of abuse – something children have been saying that they want from child contact systems.

People who did the bad stuff need to know they have done something wrong and say sorry, it’s not justice if they keep doing it.

A priority for the young people of Everyday Heroes was that perpetrators of abuse are held to account for their abuse. They wanted the people carrying out abuse to have to stop and say sorry. Children were concerned that what they saw happening instead was that the parent trying to protect them was being blamed or getting into trouble – while the person being abusive was able to carry on the abuse, including through systems for child contact.

Courts for contact need to know what my dad has done to me and my mum …they need to know…focus on dads who hurt not mothers and children.

From Power Up/Power Down, Scottish Women’s Aid and Children and Young People’s Commissioner Scotland. How children thought child contact systems should work: the Sheriff decides that the abusive parent has to change his behaviour and say sorry to the children for making them afraid. 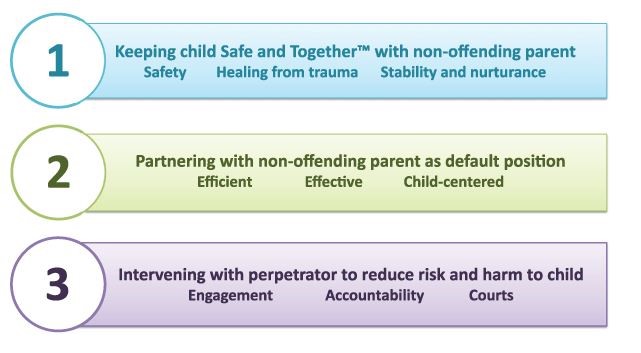 Part of the Safe &TogetherTM model is to accurately document the perpetrator’s pattern of behaviour and its specific impact on children – such as how many days of school are missed or which extended family members the children are not able to see because of his abuse. Improving Justice in Child Contact is looking forward to hearing more from the conference, and how the Safe &TogetherTM approach can help make the perpetrator and their harm to children visible – something children say is not currently happening.

she got blamed for what was happening and he was invisible

How will we know we are making a difference? Embedding evaluation in the IJCC project