Due to the actual circumstances known to everyone, the conference has been cancelled.

We will be in touch with the authors shortly and update this page with further information. If you have any question please contact us on gso2020@exseed.ed.ac.uk 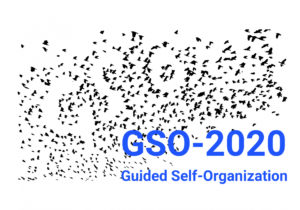 Examples of self-organising systems can be found practically everywhere: a heated fluid forms regular convection patterns of Bénard cells, neuronal ensembles self-organise into complex spike patterns, a swarm changes its shape in response to an approaching predator, ecosystems develop spatial structures in order to deal with diminishing resources, and so on.

Typically, self-organisation (SO) is defined as the evolution of a system into an organised form in the absence of external pressures. SO within a system brings about several attractive properties, in particular, robustness, adaptability and scalability. In the face of perturbations caused by adverse external factors or internal component failures, a robust self-organising system continues to function. Moreover, an adaptive system may re-configure when required, degrading in performance “gracefully” rather than catastrophically. In certain circumstances, a system may need to be extended with new components and/or new connections among existing modules — without SO such scaling must be preoptimised in advance, overloading the traditional design process.

One may ask whether it is possible to guide the process of self-organisation towards some desirable patterns and outcomes? Over the last decade, it has become apparent that this question can be rigorously formalised across multiple domains, leading to the emergence of a new research field: Guided Self-Organisation (GSO).

In general, Guided Self-Organisation attempts to reconcile two seemingly opposing forces: one is guiding a self-organising system into a better structured shape and/or functionality, while the other is diversifying the options in an entropic exploration within the available search space. At first glance, these two alternatives may even appear irreconcilable in principle, given an apparent contradiction between the concepts of guidance (implying control) and self-organisation (implying autonomy). However, the resolution of this paradox capitalises on the distinction between the concepts of “control” and “constraint”: rather than trying to precisely control a transition towards the desirable outcomes, one puts in place some constraints on the system dynamics to mediate behaviors and interactions.

Thermodynamically, a spontaneous increase in order produced by the interactions of elements within a complex system must be offset by production of entropy which, broadly speaking, can be understood as a decrease in order. Thus, Guided Self-Organisation (GSO) attempts to harness the order-inducing potential of self-organisation by guiding the system towards a desired regime or state, while “exporting” the entropy to the system’s exterior.

Thus, the main challenge faced by designers of self-organising systems is how to achieve and control the desired dynamics. Erring on the one side may result in over-engineering the system, completely eliminating emergent patterns and suppressing an increase in internal organisation with outside influence. Strongly favouring the other side may leave too much non-determinism in the system’s behaviour, making its verification and validation almost impossible.

The notifications about acceptance will be send out around 20th of March 2020.

Authors of accepted submissions will present their contributions at the conference.

Full papers of selected contributions will be published in a special journal issue in Complex Systems and/or Frontiers in Neurorobotics.