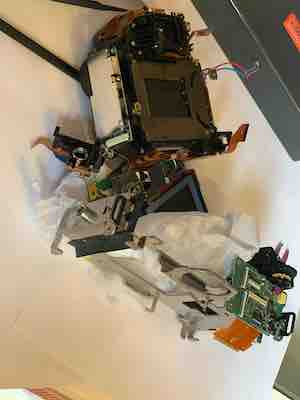 If you see the ‘No user serviceable parts inside’ notice as a challenge, I am with you. I am in the class of people most open to the right to repair movement so I want to introduce some reflection on what it means and whether it is the right way to frame what we want. And what we want is knowledge and control over the material technologies of our lives, and to resist the constant ramp towards platform lock in that now pervades the physical as well as the virtual realm.

A right is just a desire, along with the capacity and willingness to exercise it. You do not have the right to vote. You can vote if some conditions prevail (you are an adult citizen, mentally capable, not in prison, able to get to the polling station, give a toss etc). Likewise, the right to free speech, property, right to life etc. Any right you mention can be terminated. Please do tell the nurse switching off your ventilator about the European Convention on Human Rights Article 2. Trust me, she’ll do it just to save on the electricity. The whole thing is a massive scam, like dishwasher tablets. I’ve never bought them. It cleans just as well without them.

When we campaign for rights we really just mean: we want this not to be just the province of affluent, high cultural capital, centrally approved sort of folk.It just means nobody else will. Alcohol might be banned in Saudi Arabia but wealthy, male Saudis exercise their right to get merry very easily. A right to intoxication would mean allowing people the legal and actual capacity to buy and use alcohol or other drugs. Maybe the Saudis would have had more luck banning alcohol if they just let Apple sell the stuff but lock it to people who had phones running iOS 16.

Okay, I put that a bit strongly, naming rights helps organise and codify them. Right to repair is a set of requirements that are primarily about returning control of technology to users and the communities they belong to. This is a laudable goal, which will only be met in a very limited way with an actual right to repair. We should understand why this shift happened and why some technologies appear to be repairable in the first place. The reason I say this is that otherwise it is very easy for a company to throttle a right to repair just by ceasing to make the relevant parts. As someone who finally got the part they need for my 10 year old Canon EOS 5D (see picture) I know that it is easier to observe in theory than practice. And the Canon is super-repairable. I could get right into the guts of it but still need to replace the expensive shutter unit, rather than the cheap shutter itself. And I can afford the time to do all this.

The ability to repair old bangers exists only because: for many of us, we couldn’t afford new ones; and some are worth it to keep roadworthy but are essentially useless. Software locked tractors massively impinge on the ability to maintain a significant fixed capital investment but that is quite a specific type of use case. Can we analogise from that to Apple’s penchant for soldering everything onto the motherboard, and gluing everything that can be glued?  Likewise, PCs are not more popular than Macs because they are sometimes repairable and upgradable. They are more popular because they are more popular, they fit more use cases, and can do more stuff – especially but not only games. What the r2r movement is objecting to is the centralisation and concentration of the supply chain and the damage that does to communities’ ability to adapt technology to their needs. I believe that we need to expand this attitude to every technology where it has happened, which is most of them, from pharmaceuticals to bicycles. I also think this logic is tending towards each of these technologies acting as part of an integrated system – e-bikes, smart drugs, they all function as parts of an integrated whole. R2R is one way of pushing back against some of the more damaging elements of that. So my main angle is really that it is the starting point to go beyond the valuable use cases that it invokes to a broader take on the infiltration of technology into social life.

You never had and will never have the right to repair, or any other rights for that matter / Dark matters - Angus Bancroft's teaching and research by blogadmin is licensed under a Creative Commons Attribution CC BY 3.0