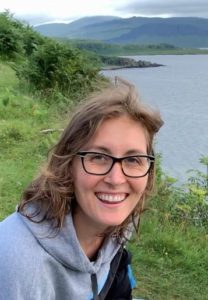 Affordable and efficient grid-scale energy storage is essential to decarbonise energy and meet our Net-Zero commitments. Hydrogen generated from renewable energy is a promising technology that can provide sustainable and secure grid-scale energy storage while reducing environmental emissions. Hydrogen offers the capacity to decouple renewable energy generation from demand, enabling the decarbonisation of difficult to abate sectors such as heating and heavy-duty transport while balancing inter-seasonal energy supply and demand; all major challenges in societal decarbonisation. Geological energy storage in subsurface porous rocks, such as saline aquifers, is a proven technology and is the only option capable of delivering the necessary capacity for storing the TWh of hydrogen needed for a zero-carbon future. However, the behaviour of hydrogen over multiple cycles of subsurface injection and withdrawal, and our ability to monitor that behaviour, remains uncertain. Key unknowns are the long-term integrity of a storage site and the efficiency of recovery.

I am a postdoctoral researcher interested in fluid-rock interactions and fluid flow through pore space and fractures in the subsurface. In particular, I am interested in understanding the micro-physical processes involved using in-situ x-ray microtomography, and combining this with acoustic monitoring to relate these processes to changes in rock acoustic properties and inform rock physics models. My background is geophysics and my other research interests include the micro-mechanics of deformation and faulting, the statistical physics of fracture phenomena (acoustic and electric) and their potential as earthquake precursors, damage localisation in materials under stress, controls on and the predictability of material failure, earthquake source physics, and relating inferences made about the subsurface from acoustic monitoring with local changes in micro-structure and strain.

My current role is Research Associate on the EU-funded project HyUsPRe: ‘hydrogen underground storage in porous reservoirs’ conducting experiments to understand fluid-rock interactions and fluid flow behaviour during multiple cycles of hydrogen injection and withdrawal in porous rocks and caprocks. These experiments will help to address the key unknowns above.

My previous role was Researcher Co-I on the NERC-funded project CATFAIL: ‘catastrophic failure: what controls precursory damage localisation in rocks?’ (https://gtr.ukri.org/projects?ref=NE%2FR001693%2F1), in which I conducted laboratory experiments focusing particularly on high-resolution, time-resolved (4D) in-situ imaging of rock deformation and failure using synchrotron x-ray micro-tomography. Catastrophic failure of rocks in the brittle Earth is a critically-important driving mechanism for phenomena such as landslides, volcanic eruptions and earthquakes, including induced seismicity. Failure of engineering materials can lead to large-scale infrastructure collapse and destabilisation of the subsurface. So system-sized material failure is vitally important to understand and forecast, particularly for the management of risk associated with it. I combined the tomographic imaging with seismology and statistical physics approaches to better understand the process of catastrophic material failure. Key questions included: (i) how do cracks, pores and grain boundaries interact locally with the applied stress field to cause catastrophic failure to occur at a specific place, orientation and time?, (ii) what dictates the relative importance of quasi-static and dynamic processes?, and (iii) why can we detect precursors to catastrophic failure only in some cases?

Previous projects I have been involved in at University of Edinburgh include (i) an industry-funded ICCR (https://iccr.org.uk/) project ‘4D Carbonate Rock Physics’ (4DRP) investigating the properties and behaviour of carbonate rocks under stress using rock deformation experiments and x-ray micro-tomography, (ii) a short GCRF pilot project ‘Research for Emergency Aftershock Response’ (REAR) aiming to improve understanding and operational forecasting of aftershock sequences in order to assist emergency response by determining the potential of mobile phone accelerometers to augment seismometer networks, and (iii) a short EPSRC-funded Impact Acceleration Accounts (IAA) project, organising a series of workshops to develop academic-industry collaborations around Carbon Capture, Utilisation and Storage (CCUS).