One regret, one hope with Juan Cruz

In this new series, Professor Mona Siddiqui, Assistant Principal Religion and Society, chats to members of our community to find out more about them. Each fortnight she’ll be asking, what is the one regret that has shaped their past, and what is their one hope for the future. 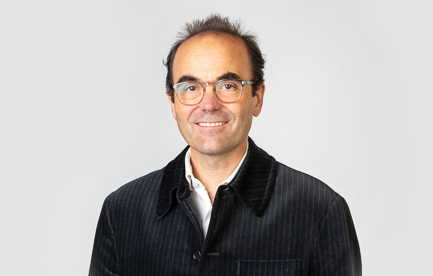 Mona Siddiqui: My guest today is Professor Juan Cruz, Principal of the Edinburgh College of Art, or ECA as it’s known for short, Juan welcome.

You were born in Spain but studied in the UK, you are an artist and writer so can you tell our audience what kind of art you specialise in?

Juan Cruz: Well I studied painting and art theory when I was at art school but the work that I make now involves quite a lot of writing, speaking and also videos. I’ve been working with narratives, mainly short narratives captured through video but the relationship to painting is still quite strong in the sense that certain kinds of colour and formal qualities are still really significant in the visuals of the work.

MS: Were you always drawn to art in some form, even as a child?

JC: Not really actually! I think ultimately I went to art school more because I was really nervous about what else I would do rather than necessarily because I wanted to be an artist. So the idea of being an artist allowed me somehow not to be anything else I think that was really the main attraction.

MS: That’s a really interesting way to put it. You came to this post in 2019 from the Royal College of Arts – what has this new role been like for you?

JC: Well it’s been amazing, partly because of the institution being so extraordinary. The thing that really attracted me was how we could have this comprehensive school of art and design which also incorporated architecture and history of art and music within this huge, world-leading, ancient University and that combination is just unique. It’s been fantastic to try to get to grips with that and understanding the institution. Of course, most of my time in Edinburgh has been in the light of Covid-19 so it’s been really fascinating to go through my first lap in this unusual way. It’s certainly helped me to get to know my colleagues much better than I might have otherwise.

MS: What role do you think art plays in our lives when there is so much loss and anxiety around us?

JC: Something that I’ve been very conscious of in terms of art in life is the role that art plays within a domestic context. Over this period I’ve certainly become far more conscious and aware of the things that I have that I look at everyday, that I listen to everyday, somehow that way in which one might feed one’s senses becomes really important even on just a domestic basis. Many conversations I’ve had with other artists over this period have been about the kinds of things that really matter to them in art and those things maybe that don’t matter so much in this kind of context and I think that’s been really fascinating.

MS: I often say, in terms of the academy, Covid-19 will have a huge fallout in terms of probably decades of research papers looking at every aspect of it. Do you think it’s also going to influence the art world for years to come?

JC: It’s hard to say. I think the art world, if it’s anything, needs to reflect the things that are going on around it. At the moment there are times when the uncertainty and the anxiety and the pain of all this brings out the worst in people, and they get very anxious and tetchy but there are moments when you feel that people’s empathy is also heightened. We’ve all become more aware of the things that might be going on in the background in people’s lives; the details, the fact that things that may not always be entirely visible. I think those are really important characteristics of art as well – art should always help us to recognise something about what’s going on beyond what we can sense or see or hear. So I don’t know about change, but I think maybe there are certain kinds of values or certain kinds of approaches that we might learn to cherish a little bit more about art.

I’ve always been terrible about trying to anticipate what’s going to happen with art though I must say. It always surprises me how things go.

MS: Well our life is all about speculation really isn’t it.

Looking back, at either your distant past or your recent past, do you have any major regret in your personal or professional life that you could share with us?

JC: Thinking about this is so tricky because of course there are so so many things that one regrets, but one also recognises, lead one somewhere else, so I was thinking about this in relation then to Lorca, a Spanish writer who’s always been very important for me, and Lorca’s relationship to folkloric traditions in Spain, the cante hondo, which is effectively a form of lament. I’ve always been interested in Lorca and the duende, this sort of ineffable spirit that he tries to talk about which arises from loss and what can be articulated through an engagement with loss. This may sound trivial but something I think I regret looking back professionally is in my own work I’ve never quite been able to engage with the kind of lyricism that I might have liked.

Thinking about what I understand regret or lament, which is another way of putting it maybe, I regret not having engaged with it more and trying to be less serious about it on one level and that’s what I mean by lyricism; a certain kind of lightness that I don’t quite think I’ve ever been able to achieve. That is a regret.

MS: And as we all move forward, what is the one hope which you carry or hope to carry with you?

JC: I suppose it’s to do with that as well. Many years ago I did an exhibition called lament with a colleague of mine at Goldsmiths. He was a painter and we used to work together quite a lot on academic plans and my way of thinking was always very diagrammatic and his approach as a painter was always to challenge my functioning diagrams in terms of their depth or their colour which seemed to me absurd because they’re nothing to do with what they were for. It was a really important way of thinking about how we sensitise ourselves a little bit more to the things that we’re doing and in relation to what I was saying before, being more aware the kinds of things that might be going on in the background of peoples lives. If we can maintain some of the more empathic sensibilities that we’ve got towards the way we work or the people we work with that would be a real hope for me.

One regret, one hope with Juan Cruz / Bulletin magazine by blogadmin is licensed under a Creative Commons Attribution CC BY 3.0
communitystaff