Collaboration is one of the principles that makes science great – skills and knowledge are shared and ultimately science may advance further than just with a single lab. I believe my two month stay at the Institute of Physiological Genomics at the University of Munich set the first stone for a further collaboration between Edinburgh and Munich. We are both interested in brain repair, even though some aspects of our interest might differ. In particular, it was my goal to learn two photon in vivo imaging of adult zebrafish. This technique was developed in the lab I visited, and they are the only lab to do it, so naturally it was very exciting for me to visit.

The lab. The group was very big (~50 people, divided into subgroups) and had lots of students, which allowed the formation of a nice social community. Lunches were spent together in the insanely cheap cantine, which even offered Bavarian specialties and beer. Sometimes, we met up afterwards for game nights, smoothie evenings or laser tag, which was a lot of fun.

There were lots and lots of meetings, which sometimes made lab work a bit hard – anyone who has ever worked in a lab will know that these can interfere with experiments. There were lab meetings, zebrafish meetings (sadly, this was not a meeting of zebrafish dressed in suits), gliosis and journal clubs. On average, there were about two to three talks a week of multiple hours, but I gained a lot of new knowledge about neurogenesis, stem cell reprogramming and novel techniques such as single cell RNA sequencing. 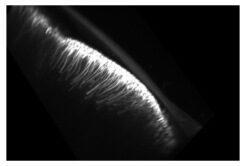 My lab work was initially mostly carried out shadowing a talented PhD student, Tamara. She is currently the only person doing the technique I aimed to learn and therefore she introduced me to the wonders, and annoyances, of two photon live imaging and the steps that precede it. I was happy that I was also of help by showing her the all-round utility star Blue Tack, which is not known in Germany: we used it to refine the set-up for the imaging and fixing tubes in place. Together, we designed and performed many experiments relevant for my project and also had lots of chocolate and coffee breaks, which allowed us to bond. Hopefully, she will be able to visit me in Edinburgh some point! 🙂

The food. Of course, I have to mention the food. I have already talked about the cheap cantine, and most things were in general cheaper than in Edinburgh. Groceries and beverages especially, although the rent in Munich is ridiculously high (you can expect to pay around 700-800€ monthly for a room). One thing I was very happy about were the bakeries – I love good bread and this is something where the UK is still lagging behind. Luckily, I managed to complete my stay without any exorbitant weight gain!

The free time. Munich is very close to my home town (about two hour’s drive), and my family was nice and trusting enough to lend me one of their cars for the two months. This enabled me to go home most weekends and spend some time outdoors and go skiing. My family was happy to see me more often than when I live in Edinburgh.

I also spent some of my free time exploring Munich, but it is simply too big for my liking (I grew up in a village of 2000 people and moved my way up all the way to 400,000 in Edinburgh, I think this is the maximum/ideal size for me) 🙂

To sum up, my stay has definitely advanced my practical skills, I have made new friends and was able to gather new knowledge in my field; it was an adventure! An adventure that will hopefully lead to scientific advancement. We are already planning to offer some master’s projects with this new technique for the next year, so if you’re interested, let me know.

However, I am also very happy to be back in my beloved Edinburgh 🙂

To end my post today, I decided to include one comic I liked by Sketching Science regarding the recent viral video of the BBC Interview.

Collaborate!… / Student Stories by blogadmin is licensed under a Creative Commons Attribution CC BY 3.0