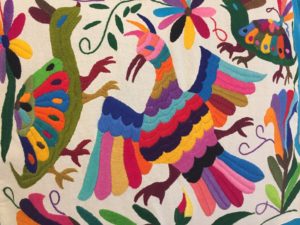 For the fourth square, I embroidered a turtle inspired by Otomi designs. I chose the turtle, because, in the indigenous language Nahuatl, Ayotzinapa means turtle. I embroidered an Otomi design because the Otomi design belongs to the Indigenous Otomi people and the 43 Ayotzinapa students were mostly Indigenous. So the search for the 43 Ayotzinapa students it’s not only a case of violence, corruption and disappearances in Mexico but also of racism. As often indigenous lives are not deemed worthy in Mexico. To bring awareness to this I want to embroider an Otomi turtle design using satin stitches. 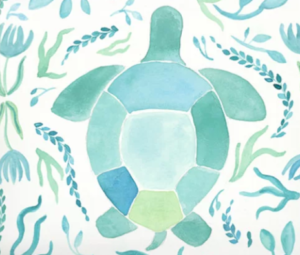 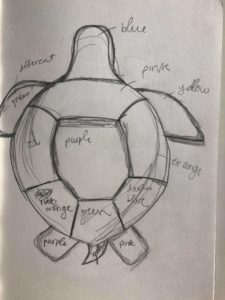 I started by sketching the turtle and planning out the colours. Ultimately I ended up switching the colours as I embroidered as I found better matches. 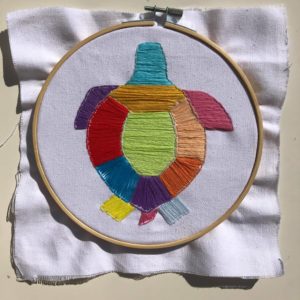 This is the end result. I used satin stitches for the different parts of the turtle. I chose very bright colours. I also used brighter colours as I wanted to make this handkerchief a bit more happy as the other ones are quite serious. So I wanted to commemorate the 43 students in a positive light too. Which is why I embroidered such a bright turtle.

To do the same as the 43 Ayotzinapa art collective and protest I have also put my embroidery on my Instagram account https://www.instagram.com/stitchahead/ feel free to check it out :).

#4 Otomi inspired handkerchief / Stitch ahead with Dzaui by blogadmin is licensed under a Creative Commons Attribution CC BY 3.0