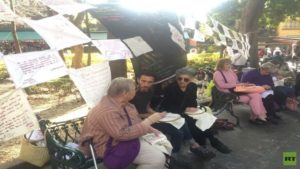 There are a lot of groups that stitch collectively. Whether it’s with family or organized Facebook groups. An example is the Fuentes Rojas Collective. They stitch together every week to commemorate the lives of the people who have died or disappeared due to the violence in Mexico. Collectively they embroider the names of the people who have gone missing or who have died on white handkerchiefs. They often use red thread (Cocking, L., 2018). 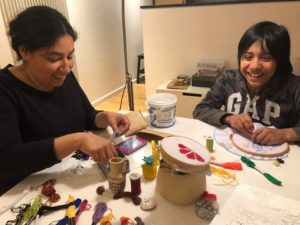 Originally I wanted to do the embroidery project in collaboration with the Mexican society as the Fuentes Rojas Collective also embroiders together. I also thought this would be a good way of talking about the situation with other Mexicans. However, As we are all stuck at home I decided to convince my mother and little brother to help embroider and we had a lot of fun together. 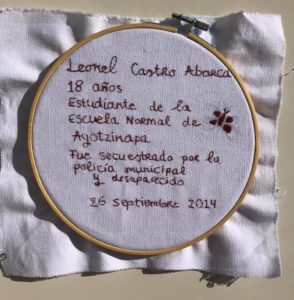 I was inspired by the Fuentes Rojas Collective who embroider white squares with the names of people who are dead or missing. I embroidered a white  square (similar to a handkerchief) with red thread which draws attention to the missing of one of the 43 Ayotzinapa students:

– Translates to Leonel Castro Abarca, 18 years old, Student of the Teacher’s College of Ayotzinapa, He was abducted by the municipal police and has been missing, 26th of September 2014.

My mom, little brother and stepfather helped embroider some of the words and also stitched the small butterfly.

To do the same as the 43 Ayotzinapa art collective and protest I have also put my embroidery on my Instagram account https://www.instagram.com/stitchahead/ feel free to check it out :).

#2 Fuentes Rojas Collective inspired handkerchief / Stitch ahead with Dzaui by blogadmin is licensed under a Creative Commons Attribution CC BY 3.0