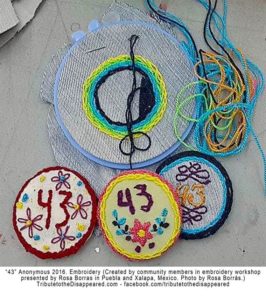 © Image by Rosa Borrás, Tribute to the Disappeared

After the 43 Ayotzinapa students disappeared everyone was very upset and people were constantly marching for justice. A lot of community embroidery workshops were given. This raised awareness but also helps people to deal with this national trauma in a way.

The embroidery created in this picture was done by community members in a workshop in Puebla and Xalapa, Mexico in 2016. 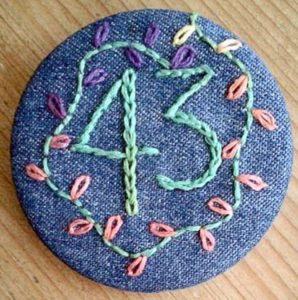 © Image by Rosa Borrás, Tribute to the Disappeared

Tribute to the Disappeared is a collective that showcases art made to commemorate and raise awareness for people that have disappeared or died because of the ongoing violence in Mexico. This picture has a similar embroidery as the one done in the embroidery workshop. They used a couching stitch around the number 43 and a lazy daisy stitch for the leaves. Then for the 4, a chain stitch was used and also a stem stitch. 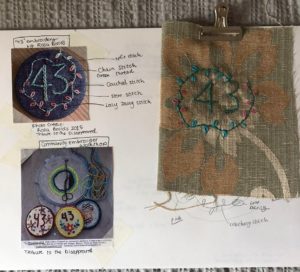 In my Sketchbook, I put various pictures of Tribute to the Disappeared and their embroidery workshop art. I wanted to do something similar in solidarity with the students and to connect with the collective. I liked the idea that a lot of other people did the same pattern to think about the situation and embroider this kind of national solidarity symbol.

Personal Project: Sampling 2 / Stitch ahead with Dzaui by blogadmin is licensed under a Creative Commons Attribution CC BY 3.0