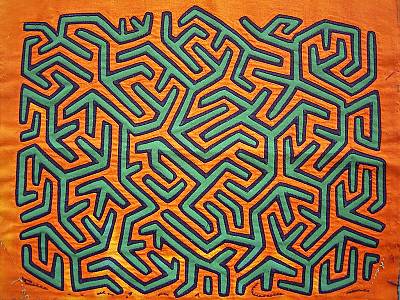 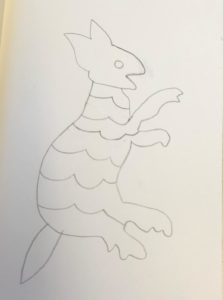 This is the design I am using for the appliqué sample. I drew it after looking at various Otomi designs. It is a design by the Indigenous Otomi people in Mexico. Some background information, embroidery gained steam when in the 1960s an economic crisis forced the Otomi people to turn to embroidery and traditional craft to make money. In Otomi designs often white cotton is used as a fabric. Otomi women then trace designs on the fabric with a pencil. Then the designs are embroidered with a satin stitch (Wondrous Paths Blog). 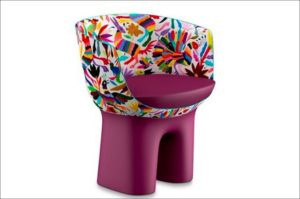 The designs of Indigenous people are often copied and stolen by big brands who then do not pay the Indigenous people for their designs. This also actually specifically happened with the easily recognizable Otomi designs. Mexico (rightfully) accused Louis Vuitton of stealing Otomi designs (Univision). This chair retails for $18.200! How much of that will end up in the Indigenous community this design was stolen from? Luckily recently new legislation introduced by the Mexican Senate to fine companies that steal Indigenous designs. Hopefully, this will lead to companies rightfully compensating Indigenous people for their work and their designs (Torres, C., 2019). 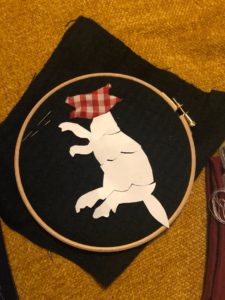 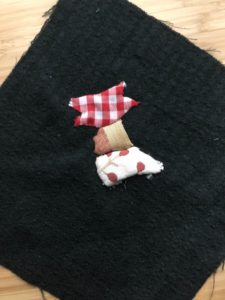 The sample on the right is from exploring the technique of appliqué in week 3. I decided to go with a red colour scheme. I also decided to do fewer layers than I originally planned in my sketch as the pieces were quite small. 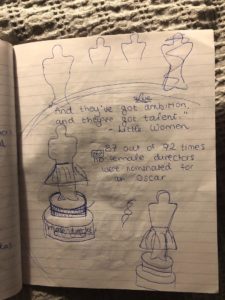 This is a rough sketch of what I was thinking of making when talking about doing a political piece. The idea is that the Oscar will wear a skirt, and there will be an embroidered quote and a bit of information about the female directors who weren’t nominated. The text reads “And they’ve got ambition, and they’ve got talent” – Little Women. This is a quote from the film Little Women, who’s director Greta Gerwig was not nominated for an Oscar. While funnily Little Women was nominated for best picture, however, the director was not nominated? This is quite strange. So, I wanted to specifically stress this. 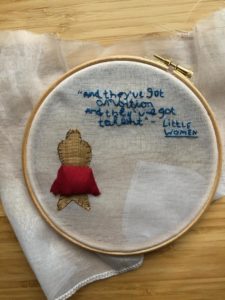 To experiment some more I also used appliqué in a different project. In week 5 we looked at the political impact of embroidery. Thus, we started by brainstorming our own ideas. I decided to talk about the absence of nominated female directors again at the Oscars this year. I decided to apply what would be the Oscar wearing a skirt with appliqué. To attach the Oscar to the base fabric I used the blanket stitch. Then to give the Oscar a bit more shape I used the trapunto technique to raise the skirt which the Oscar is wearing. I had some scraps, consisting of thread and leftover fabric which I used to stuff the skirt as to not waste the material.

Information on the featured image in the banner: © “Mola (Nähkunstwerk)” by Stefan Laube is licensed under the public domain

Torres, C., We are Mitu, 2019. https://wearemitu.com/culture/people-are-celebrating-mexicos-planned-bill-to-fine-companies-that-copy-indigenous-designs/

Week 3, Exploring Appliqué techniques / Stitch ahead with Dzaui by blogadmin is licensed under a Creative Commons Attribution CC BY 3.0