Our Research Task From Week Two

The initial piece which inspired my further research from the NDS collection was actually samples created to recreate the both the textures and visual elements in a larger scale. What stood out to me about these samples in particular was the fact they were created by prisoners. A lot of my own personal research has been into embroidery and mental health, as well as Lorina Bulwer who incarcerated in what was a called a lunatic asylum at the time. Therefor I was very interested in the concept as embroidery as a part of the rehabilitation process for the incarcerated. 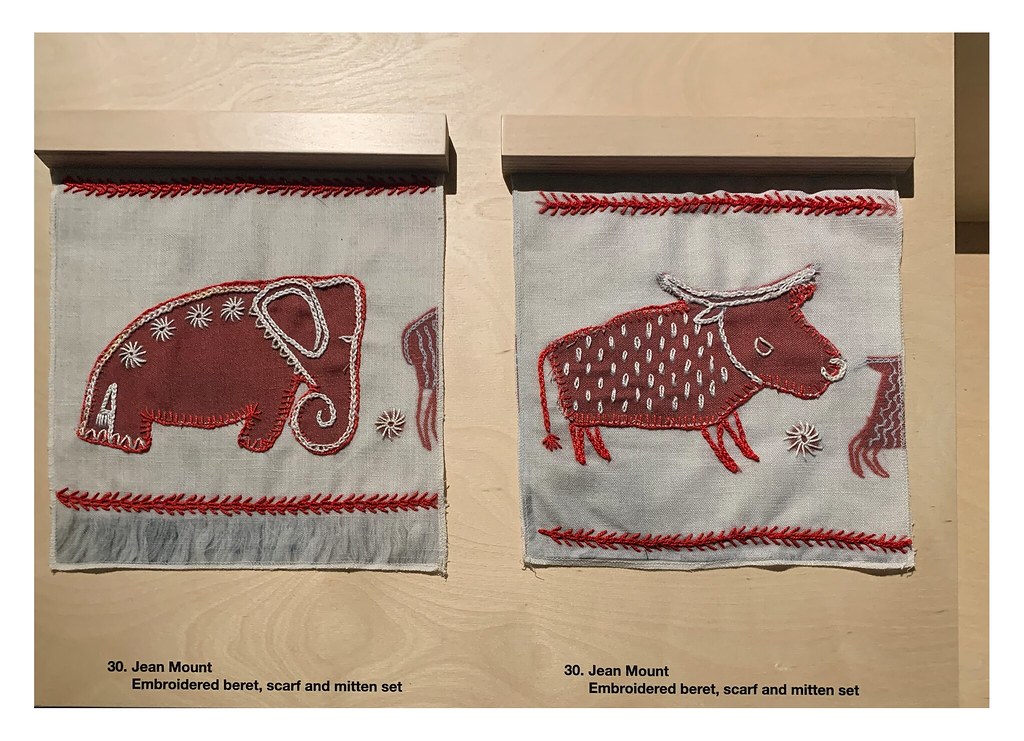 A look at the initial sample which caught my eye.

These samples were created specifically as touching samples for the Embroidered beret, scarf, and mitten set by Jean Mount. 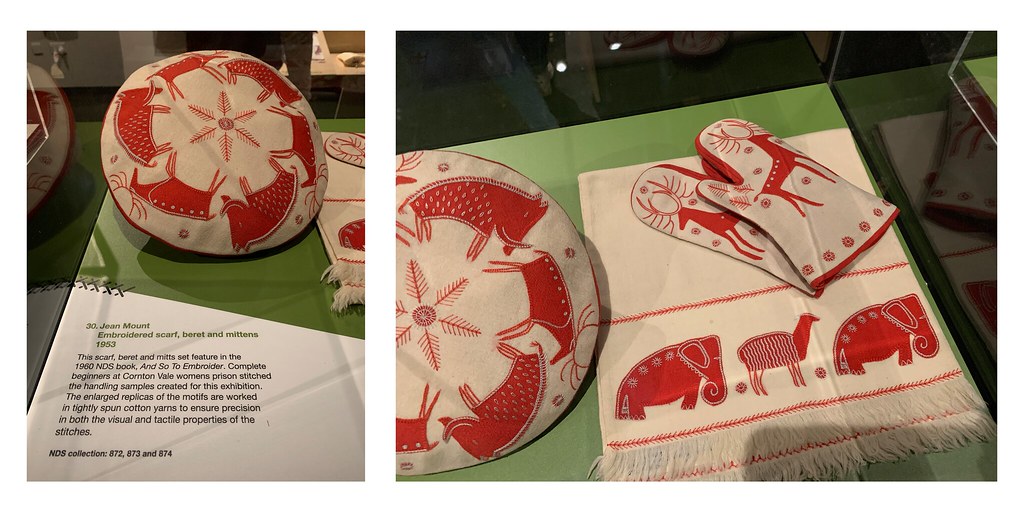 The actual objects in the exhibition.

The three items make up a matching set of mainly cream in color with berry red accent such as the trimming on the beret or gloves, the embroidery stitches themselves, and even the appliquéd animals.

The types of stitches are very similar in these pieces in order to make them a cohesive set. The animals (what appears to be bulls and deer) is appliquéd on with blanket stitch to match the color of the fabric. To give the animals detail there is use of detached chain stitch, tailors buttonhole stitch, and chainstitch. I believe the smaller embellishments to be a form of feather/fly stitch and woven wheels. 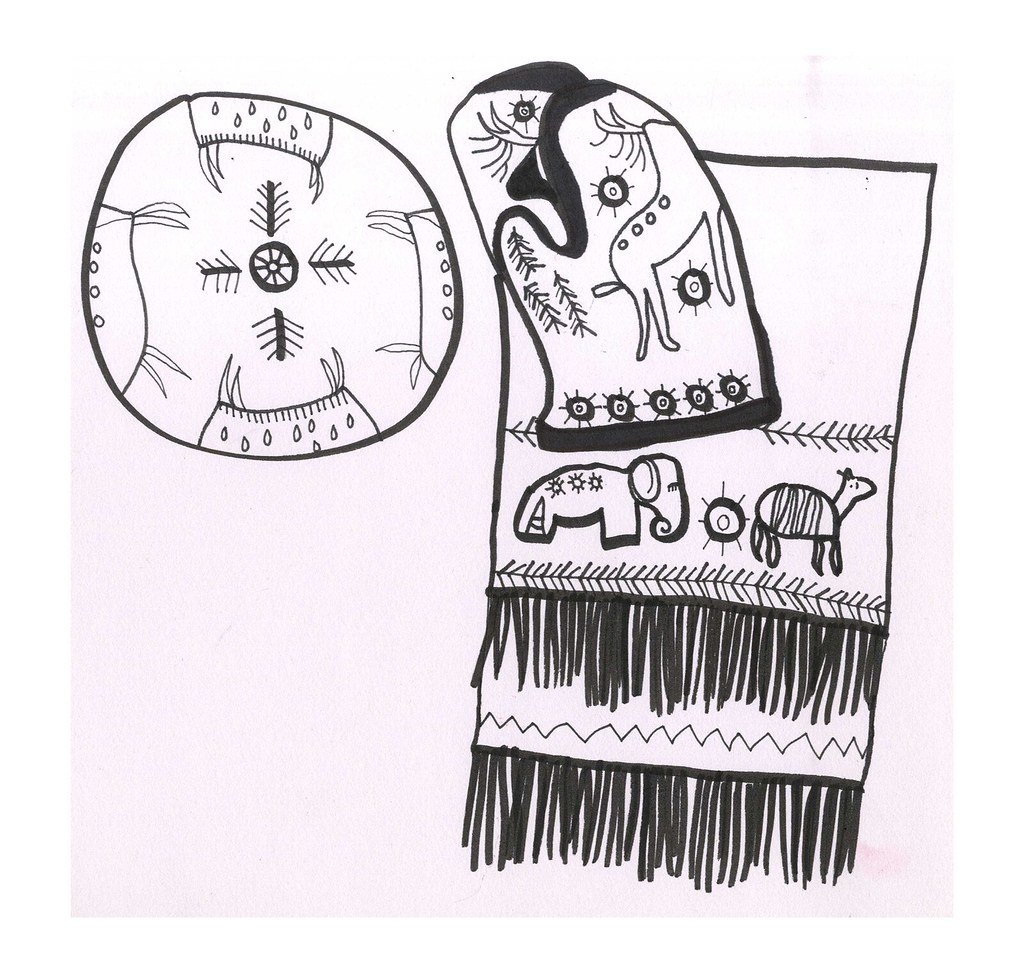 Sketch of the objects done in thick and thin fine liners, my favourite way of working. 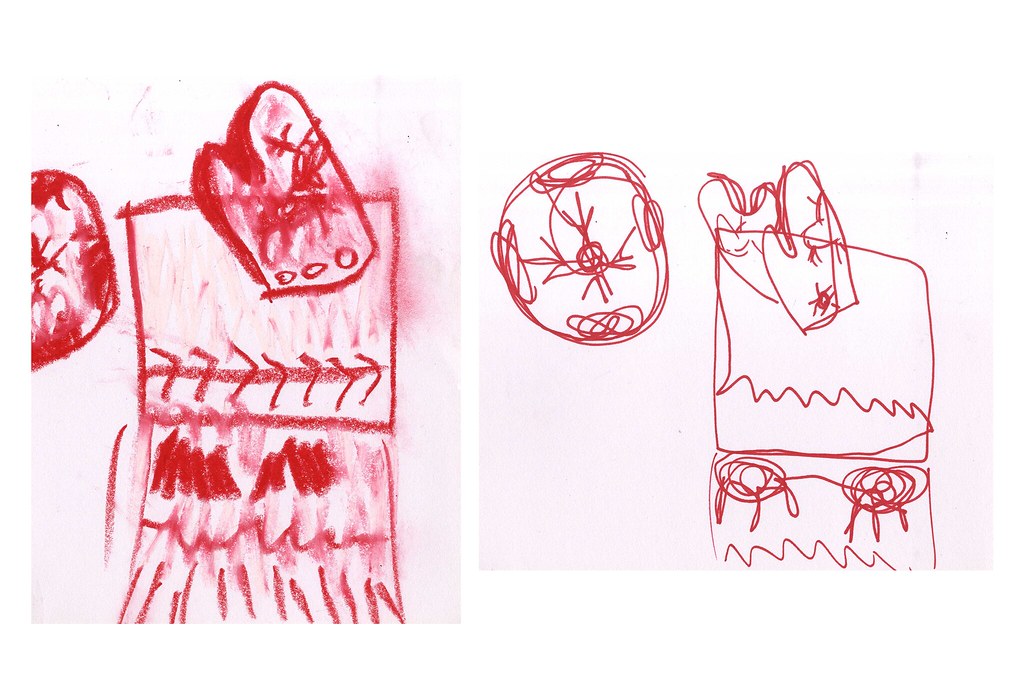 These would be functional objects. As the item description in the photograph states: 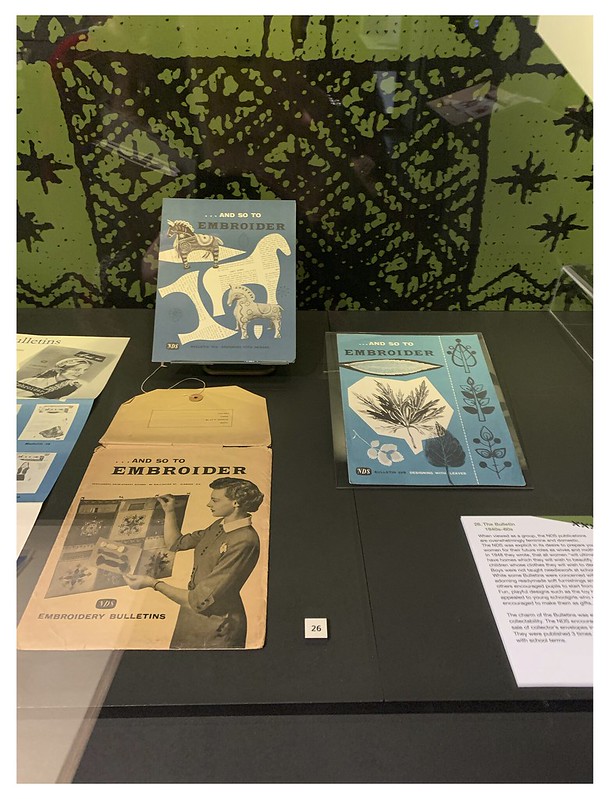 This scarf, beret, and mitts set feature in the 1960 NDS book, And So To Embroider.

Based on this, it is likely that this set would have been created by girls in school. As a part of the schools education back in these times, girls always did embroidery and drawing while the boys took part in technical drawing and wood work. 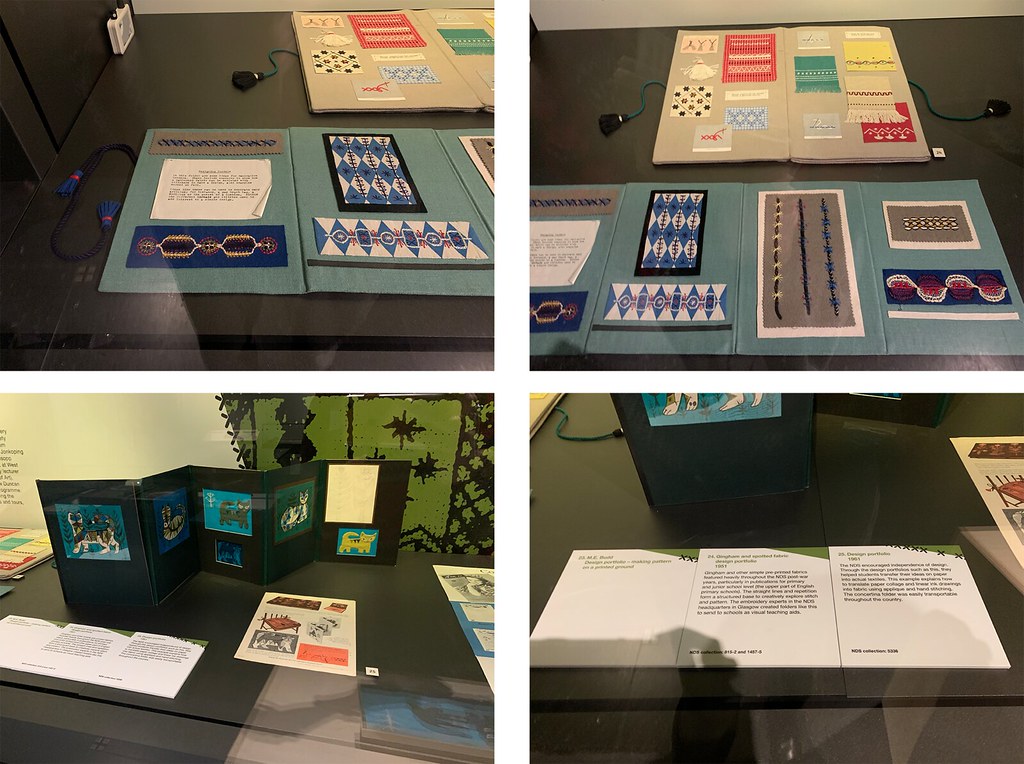 What the ‘And So To Embroider’ magazines where these pieces guides on how to make them looked like! 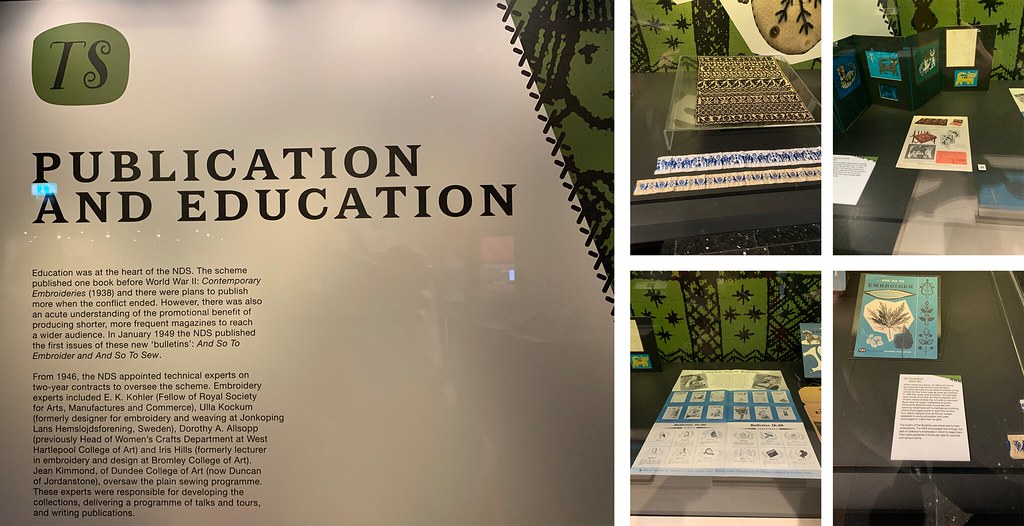 A look at the Publications and Education section of the exhibition.

What else was happening in the world in 1953? How could it influenced the design of these pieces?

Post war, kitsch was very in during Britains 1950’s. This is quite interesting as embroidery is something that can easily fit into the kitsch aesthetic. Primary colors and sugary sweet pinks were also popular-the pink-y reds found in this embroidered set very much tie into this trend. Modernism was beginning in the art and design world, bringing new flavors and inspiration to textiles alike. The main event to happen in 1953 was Queen Elizabeth II’s coronation! 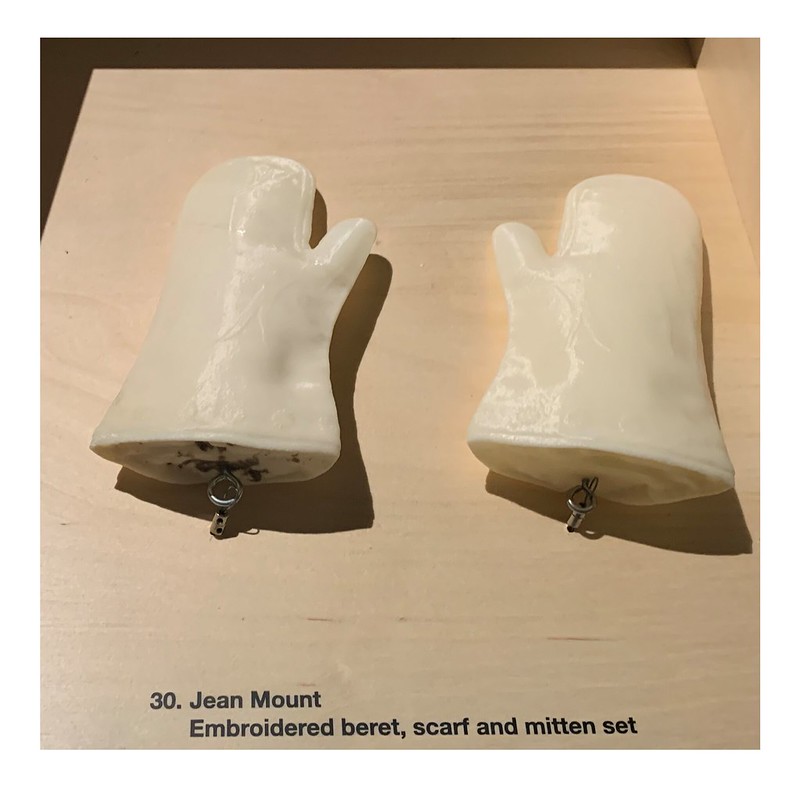 A look at the 3D printed mittens in the set. These were created so that the blind and visually impaired could interact with the exhibition through touch.

After visiting the May Morris exhibition at Dovecot, the christening mittens she embroidered caught my eye as the mittens in Jean Mount’s set were my favorite piece of the collection. In 1916 May exhibited these at Glasgow School of Art’s Ancient and Modern Embroidery and Needlework.

A look at these precious oh-so-small mittens.

Attention to detail was not spared with something as ceremonial as a baby’s christening mittens. The design was initially by Charles Rickets, and lated embroidered by May Morris herself. There are such beautiful warm golds and reds in this piece, which complement the leaf greens so nicely. She was inspired by Elizabethan embroidery, hence the reason why there is so much nature in this design. Upon reading the item description it details leaves, flowers, butterflies, and even tiny strawberries made of beads wrapped in silk.

The detailing in these is so fine and intricate it is hard to see with the naked eye exactly what stitches were used. Thankfully the item description next to the mittens states that satin, split, tent stitch, and couching were used.

My drawing explorations of the mittens. Done in thick and thin fine liner (left), oil pastel (middle), and a two-minute continuous line drawing in Sharpie (right).

It is difficult to tell whether or not they functioned as christening mittens as they are in such excellent condition, but it is likely.

What else was happening in the world in 1905 when these were initially made? How could it influenced the design of these pieces?

During the time of 1905-1906 when May embroidered these tiny mittens, the Edwardian period was taking place (1901-1910). Edwardian style was heavily inspired by nature, with pastels and florals. It was a great contrast to the previous Victorian period which focused on dark tones and cluttered interiors. In comparison, the Edwardian period was fresh and light. The influences of nature are very present in the flowers and leaves embroidered on the mittens. Color schemes were kept to those found in nature, which is why we can see the leafy greens also present in the piece. A time period which was so heavily influenced by the Art Nouveau movement and Arts and Crafts movement meant that embroidery fit right into the scene as it is widely seen as a ‘craft.’

Big things were happening around the world. Between the first flight of an airplane in 1903 by the Wright brothers, and the invention of the Model T Ford in 1908 in the US, lots was happening to influence artists and designers alike.

ARCHIVAL INSPIRATION RESEARCH / Stitching & Bitching by blogadmin is licensed under a Creative Commons Attribution CC BY 3.0