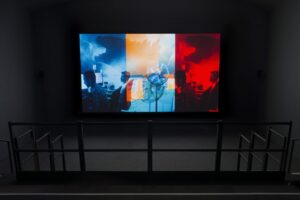 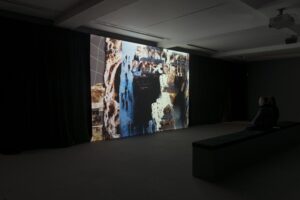 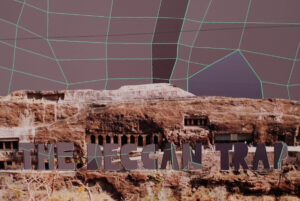 The Deccan Trap is a sci-fi fable that goes back in space and time, with one layer at a time revealed from a cut-out collage of stacked images. The piece jumps from some of the newest 3D images being produced in India and Hollywood production studios,  to 2D images of some of the oldest-bas-relief carvings in Ellora’s rock cut temples in Maharashtra. I was entranced by the concept of layering new and old. The artist has used architectural photographs in juxtaposition with an architectural style of collage to provoke themes of structure and dimension.

This piece was projected in a dark gallery space. There was no designated seating and no other visual ‘distractions’ in the room, allowing for the audience to focus solely on the individual piece of work.
Dec 2, 2020

Lucy Raven – The Deccan Trap [2015] / Tara.A.McCullough Art by blogadmin is licensed under a Creative Commons Attribution CC BY 3.0

These widgets are displayed because you haven't added any widgets of your own yet. You can do so at Appearance > Widgets in the WordPress settings.