Re-imagining the Art School Since 2001

As a way of beginning to investigate the overlap between two distinct disciplines: contemporary art and anthropology, we will start from the perspective of contemporary art.

From an artistic point of view, practice is said to turn towards anthropology. This can take a number of forms. In this little resource, I will present a couple of ways that we might identify and articulate such a turn: a) Anthropological ‘subject matter’ b) The turn to ethnography.

By way of an introduction, let’s look at a few examples of artistic practice that, perhaps, encapsulate such approaches. This will provide you with some background to this week’s reading.

In comparison with Art History’s focus on what was once called the European canon of art, early 20th century Anthropology offered a much more holistic definition of culture. Having focused disproportionately on Western art in the c19th, the discipline of Art History’s engagement with anthropology (Aby Warburg in particular c.1912) slowly ushered in more global cultural perspectives. If you want to delve into this in more depth, see:

Contemporaneously, for European artists, the increasing visibility of global artefacts expanded their conception of cultural practices and their (opportunistic) understanding of what might constitute their own artistic ‘sources’. Cultural territory that had been seen as the domain of the discipline of anthropology starts to become amenable to modernist artistic practice. Crucially, for such modernist artists, there was no fieldwork. Their understanding of anthropology/its domain was derived from what could be read and seen in European cities! We might consider this an early anthropological turn in art.

In Early European Modernism we see this, infamously, in the work of Pablo Picasso following his c.1907 encounter with the world art collections of the Musée d’Ethnographie du Trocadéro in Paris. 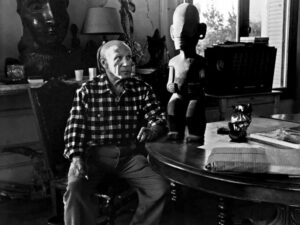 This colonial trope in Picassoid modernism (primitivism) is one that has since been dissected and deconstructed, for example, recently in From Africa to the Americas: Face-to-face Picasso, Past and Present Musée des Beaux-Arts de Montréal (Quebéc, Canada) May 12- September 16, 2018 an exhibition that mixed Picasso’s work and his ‘sources’ with that of today’s contemporary artists. Both the curatorial interpretation and the contemporary artworks in the exhibition present a postcolonial critique of the colonial perspectives that are often seen as synonymous with modernism.

From Africa to the Americas: Face-to-face Picasso, Past and Present

In early postmodernism, pop artists were equally enthralled by ethnographic collections, but start to see these as aligning with conducting something akin to an amateur ethnography of capitalism (‘pop art’). Objects in particular become part of a much broader quasi-fictional narrative of animate and allegorical things. Fieldwork is still largely absent here; however, there is a greater sense of parallelism and interplay between cultures (rather than straightforward cultural appropriation). A good example remains Lost Magic Kingdoms at the British Museum, 1987 curated by Edinburgh-born co-founder of the Independent Group and British pop art Eduardo Paolozzi. We might consider this to represent a second phase of the anthropological turn in art (sometimes referred to as ‘museological art’). 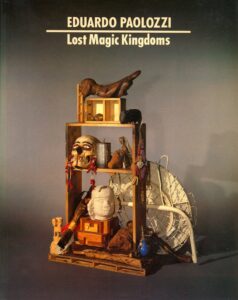 A small redux of Paolozzi’s Lost Magic Kingdoms was included in his Whitechapel retrospective of 2017:

Late postmodernism, like the discipline of anthropology itself, starts to interrogate the ethnocentrism of the artworld. The controversional Magiciens de la Terre at at the Centre Georges Pompidou and the Grande halle de la Villette 18 May – 14 August 1989 remains a central case study in this regard. Magiciens de la Terre tackled the anthropological turn from a nascent postcolonial perspective. This third phase of the anthropological turn in art takes place while anthropology is both decolonising and turning towards arts-based approaches (partly as a way of reviewing and decolonising its own history as a discipline). 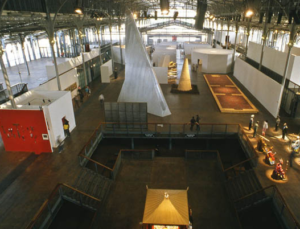 Like Lost Magic Kingdoms, this legendary exhibition has also been reduxed:

Magiciens de la terre, a look back at a legendary exhibition – Exposition documentaire

Magiciens de la terre Retour takes us full circle. What we might now think of as acts of cultural appropriation – such as Picasso openly plundering ‘African art’ – brought non-Western cultures into the orbit of art galleries (rather than reserving them within ethnographic museums). It is difficult to imagine now how a major exhibition – whether presented in a gallery or museum – could not adopt a global, postcolonial curatorial perspective.

The tendency to redux (retour) exhibitions or intense periods of artistic development (‘scenes’) such as those delineated here – part of a broader trend in exhibition studies – is one that requires artists and curators to foreground and interrogate their own biases and to change the course of how we present cultural practices in exhibitionary settings.

Art galleries do not limit themselves to exhibiting works of art: e.g. the other major exhibit at Musée des Beaux-Arts de Montréal accompanying Africa to the Americas: Face-to-face Picasso, Past and Present was on the fashion designer Thierry Mugler: Beyond Couture. Equally, ethnographic museums now commission new contemporary works of art to exhibit alongside their larger collections; an example here would be the curatorial programming of the Tropenmusuem of World Cultures in Amsterdam:

The artist-museum residency is centrally important here. It enables artists to research collections of artefacts that they were unlikely to have engaged with when they were art students. Major works of contemporary art now regularly emerge from collaborations between artists and ‘ethnographic’ museums. For example, Camile Henrot won the Silver Lion Award at the Venice Biennale in 2013 for Grosse Fatigue, a film she create during her 2013 fellowship at the Smithsonian Institution, Washington D.C.

Contemporary art galleries and biennale (which have not collections to look after) and museums (which do) are, thus, now both involved in programming and commissioning culture rather than collecting and/or curating pre-existing artefacts. The line between cultural production and cultural analysis – a boundary that has been more clearly demarcated in anthropology than in art – is increasingly blurred in both disciplines.

Part 2 | The turn to ethnography

Firstly a caveat: In his 2007 Radcliffe-Brown Lecture, renowned anthropologist Tim Ingold argued that anthropology is not ethnography. DOI:10.5871/bacad/9780197264355.003.0003 Certainly, ethnography predates modern social anthropology and, as a method, ethnography not unique to anthropology (e.g. it is equally prominent in sociology and human geography).

This particular alignment between the practices of contemporary artists and the practices of ethnographers is widely attributed to Foster, Hal. “The Artist as Ethnographer,” in The Return of the Real. Cambridge: The MIT Press, 1996. You will have see that Foster’s text is a common point of reference for many of readings for Week 2.

Foster uses this analogy to cast doubt on the research practices of artists who have a particular investment in social practice and, thus, conduct ‘site-specific’ investigations and immersive social experiments that resemble ethnographic fieldwork wherein ethnographers situate or immerse themselves in everyday life of their subjects of study (participant-observation). It’s worth reading Foster’s chapter to gain his insight into the issues this raises:

Artists who have formally studied anthropology frequently adapt ethnographic approaches to their own artistic ends. For an artist, ethnographic method might not be so much a shared disciplinary endeavour (‘methodocentrism‘) as a resource to be selectively ‘mined’ to form part of their distinctive approach to producing artistic-knowledge (extradisciplinarity). A good example of this is Aleksandra Mir’s Living & Loving project (2002-05) which takes an ordinary human subject as its field. Mir’s approach is unlikely to be regarded as straigforwardly ethnographic by an anthropologist, but it does borrow some its key assumptions from ethnographic method (it contains elements of fieldwork, of immersive participant-observation, focuses on rituals of everyday culture, is concerned with kinship and personhood formation, uses semi-structured interviewing techniques…)

Of course, ethnographic field work is slow, ethnographers normally spend a year or more immersed in the field. Mir’s spends only a few days perhaps. Her project shows also her growing identification with the subject; Mir doesn’t attempt to maintain an objective distance as ethnography attempts to (at least in the early 20th century).

While it does not focus on the artist herself, Mir’s Living & Loving project has parallels with auto-ethnography. Auto-ethnography is a hybridised method, it borrows its tactics and approaches equally from the arts and the social sciences.

In Anthropology, auto-ethnography is a self-conscious process and product grounded in personal experience. As a method, it aligns as much with literature (biography, narrative storytelling and creative nonfiction) as with social science. Like a work of postmodern fiction, auto-ethnography implicates the narrator in their own narrative – proffering stories that are value-centred rather than supposedly value free.

There are two broad ways that auto-ethnography tends to surface in recent artistic practice.

In art, the artist-as-ethnographer of the self can act a proxy for a semi-structured investigation into working-practice. Artist-Researchers frequently present their practice as a self-conscious process, proffering personal stories of their researcher journey that are – very explicitly – value-centred. Auto-ethnography in artistic research often, then, focuses on how the artist develops their own practice. It does this by foregrounding the subjective, the personal circumstances and biases of their own artistic research. (The analogy works in reverse, an artistic process such as sketching can be used to describe autoethnography: Rambo, Carol. “Sketching as Autoethnographic Practice.” Symbolic Interaction 30, no. 4 (2007): 531-42. doi:10.1525/si.2007.30.4.531)

In art, the auto-auteur **tends to focus more on personal personhood formation. While still self-conscious, resulting works of art are more product than process focused. This approach is one that is, thus, more recognisable since it is continuous with the c19th genre of the autoportrait. Where auto-ethnography favours nonfictional storytelling, the artist-autobiographer frequently ventures into what Lauren Fournier calls autotheory (2018; 2021).

Some questions to explore in your Course Blog: